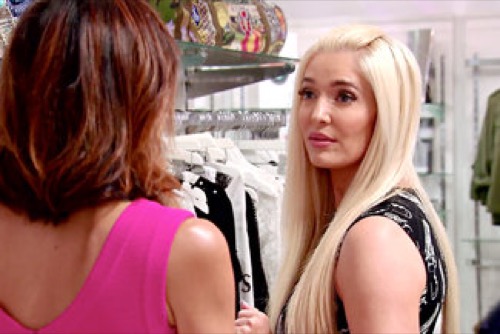 Tonight on Bravo The Real Housewives of Beverly Hills airs with an all new Tuesday, January 19, season 6 episode 8 called, “Going Deep,” and we have your recap below. On tonight’s episode Kyle Richards holds a book signing at her new Hamptons pop-up shop for her friend Bethenny Frankel. Later, the ladies enjoy a final dinner in the Hamptons, where Eileen Davidson shares a shocking secret from her past.

On the last episode, the women continued their adventure in the Hamptons. Eileen was still upset about being interrogated by Lisa Vanderpump about her “affair” with Vince. Lisa Rinna got prudish watching Erika Jayne’s videos, and the women all got a taste of Erika’s alter ego when Kyle’s good friend Bethenny Frankel invited everyone to dinner. Yolanda misses all the fun as she recovered from her surgery in Cleveland. Did you watch the last episode? If you missed it we have a full and detailed recap right here for you.

On tonight’s episode per the Bravo synopsis “Kyle holds a book signing at her new Hamptons pop-up shop for her friend Bethenny Frankel. Later, the ladies enjoy a final dinner in the Hamptons, where Eileen shares a shocking secret from her past. Erika uses her private plane to pick up Yolanda, who is still recovering from her surgery, while Kyle meets with her confidante Faye Resnick, who gives her some advice for dealing with her sister Kim. Lisa Vanderpump hosts a charity event where Lisa Rinna runs into an old friend with an intriguing past.”

Kyle had originally gone out to the Hamptons in order to open a pop-up shop with her business partner and so finally did just that on tonight’s episode of “The Real Housewives of Beverly Hills”.

Although Kyle’s event somehow became all about her sister Kim. Kim had been one that had recently gotten arrested and so she was already the number one topic out in the Hamptons but it only got worse at Kyle’s pop-up shop. Her aunt and cousins had come by. And the family had wanted to know how Kim was doing.

Yet Kyle couldn’t answer them because in all probability Kim was at Kathy’s and Kyle wasn’t even on speaking terms with their other sister. So Kyle had felt really bad about that but her friends hadn’t offered her any relief because they too wanted to talk about Kim. Lisa Rinna had apparently felt like there was unresolved issues between herself and Kim. And so Lisa wanted to reach out to Kim during this difficult time just so they could put that firmly in the past.

And so it didn’t matter that Kyle was in the Hamptons. Doing something for herself and for her family. Somehow the drama surrounding Kim always became her problem.

Therefore, Lisa Vanderpump later asked Kyle a question about that at dinner. She asked Kyle if there was anything she could do so that her sister’s situation didn’t affect her as much. And Kyle said that there was nothing which is true for any family whose loved one was or is suffering from an addiction. Erika eventually said her confessional that she had to realize something when she had lost a cousin.

She said that although you want to help, they have to help themselves. So Lisa wasn’t given an answer she didn’t particularly like because she thought that there was something that Kyle could do. Even if it was mainly for herself.

Though Lisa’s questions had gotten her into enough trouble as it is. Eileen had tried to tell her that after their second conversation, she felt like she had offended Lisa by bringing up her feelings. And Ken had actually tried to jump in but Eileen had reminded him that she was speaking to his wife whom she considered to be a friend.

Only there was one thing that everyone eventually says about Lisa. They tend to feel like she was constantly on guard and that she never allows herself to be vulnerable around them. And that’s how they felt after Eileen had spoken with Lisa because Lisa still didn’t get her side.

It was almost as if apologizing would kill Lisa Vanderpump. And even as the conversation took a deeper note, where they all going around the table to name the one thing that kept them up at night – it was like drawing blood from stone with Lisa. She said that there was nothing that kept her up at night and that she wouldn’t lie just to say something.

But looked like she had been on guard again. Meanwhile Eileen dropped a pretty big secret of her own when she told the ladies about a past abusive relationship. It seems that an ex of Eileen’s had once beaten her up so badly that she a broken nose and several fractures that took months to heal. So Eileen had been prepared to open herself up but once she did – Lisa just had to say that at least she didn’t ask about past abusive relationships because that would be something for Eileen to actually get upset over.

So Lisa did the point of opening up. Though things did return somewhat to normal when the ladies returned to the west coast. Erika had taken her private plane back home but she had made one more stop before she did.

She had picked up Yolanda from her surgery and Yolanda had said that she felt much better. After the doctors had removed her implants, they had found a bunch of free-floating silicone and it had been a mess that the doctor had to clean out. But now Yolanda says she’s breathing better and she’s not coughing as much as she used to.

Meaning something good came out of her surgery. And in spite what some may have said in the past, Yolanda hadn’t been crazy or imagining things. She genuinely ill and her breast implants had been impartially at fault.

Which was Erika later told the rest of the group. They had all gone out together to Lisa Vanderpump’s charity event and they had all been enjoying themselves there when they ran Lisa Rinna’s old friend Kathryn. Kathryn seemed like a pretty nice person and those that met certainly enjoyed it. But Kyle had been curious enough to ask a certain question.

See she had found out that Kathryn had once been married to Marcus Allen and according to her very good friend Faye – it was Marcus’s affair with O.J.’s wife that had set him off. So Faye had written about the whole thing in a book and Kathryn had also been mentioned in book as well seeing as she had been married to Marcus during the alleged affair. However, Kathryn denied ever meeting Faye and said everything that Faye had written about her had been a lie.