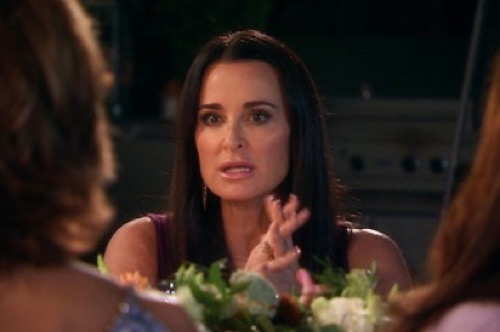 Tonight on Bravo The Real Housewives of Beverly Hills airs with an all new Tuesday January 26, season 6 episode 9 called, “Busted BBQ,” and we have your recap below. On tonight’s episode Lisa Vanderpump takes a tour of the space that Ken wants for a new restaurant, and it turns out to be a sex shop! Eileen Davidson flies to Italy to spread her sister’s ashes.

On the last episode, Kyle held a book signing at her new Hamptons pop-up shop for her friend Bethenny Frankel. Later, the ladies enjoyed a final dinner in the Hamptons, where Eileen shared a shocking secret from her past.

Erika used her private plane to pick up Yolanda, who was still recovering from her surgery, while Kyle met with her confidante Faye Resnick, who gave her some advice for dealing with her sister Kim. Lisa Vanderpump hosted a charity event where Lisa Rinna ran into an old friend with an intriguing past. Did you watch the last episode? If you missed it we have a full and detailed recap right here for you.

On tonight’s episode per the Bravo synopsis “Lisa Vanderpump takes a tour of the space that Ken wants for a new restaurant, and it turns out to be a sex shop! Eileen flies to Italy to spread her sister’s ashes. Kyle hosts a BBQ where the main course is confrontation: Kyle and Lisa Vanderpump question Yolanda’s claim that her children have Lyme disease, and Kathryn finally confronts Faye Resnick about a 20-year-old grudge.”

This week on Real Housewives of Beverly Hills Lisa Vanderpump and her husband Ken go to a sex shop that Ken is looking to renovate and turn into a restaurant. Lisa is not happy because she does not want to do another year’s worth of work and open up another restaurant while Ken thinks that once it completed it could be a great English Tavern for their son Max to manage. Lisa thought that she and Ken were going to wind down and be able to retire as opposed to working 16 hour days.

Katheryn and her husband Donnie go shopping and she asks Donnie what he will buy her. He asks her what she wants and she tells him she wants more diamonds. Donnie tells her to pick out one piece that she wants but that if she does the renovations for their house in San Diego will be put on hold. She decides not to get the jewelry and continue with the renovations. Katheryn talks about the fact that she and Donnie love to travel and decided against having children because it would cut into their freewheeling lifestyle.

Kyle calls all the women to invite them to a Bar B Que including Katheryn and Faye Resnick who have had issues in the past.

Eileen is getting ready to go to Italy to spread her sister Connie’s ashes and feels completely frazzled about the whole situation. Her niece AnnaMarie, son Jesse, stepson Duke and husband are all going with her for a total of seven people and she is frantic about the whole trip. She is worried that something is going to go wrong

Katheryn and Lisa Rinna met up for lunch and Lisa asked her why she never had children. Katheryn tells her that she and Marcus just never did and She and Donnie live too much of a Nomadic lifestyle for children to be involved.

Eileen is in Italy and having a good time, but the specter of scattering her sister’s ashes still hangs over her head. She tells her husband that she feels a lot of guilt for not being there when Connie was dying even the Dr. told her that she didn’t want them to know. When she goes to spread the ashes she tells her sister that she “loves and misses her, and thanks her for being a great sister.” After Eileen is done spreading the ashes she says she “feels lighter and like she can finally start to breathe easier.”

On the day of the party Kyle is a nervous wreck. She is running around the house trying to make sure everything is perfect. Everyone is starting to arrive at the party. Everyone felt really underdressed for the Bar B Que because Kyle was so dressed up.

Lisa Rinna was shocked to see Yolanda. She admits to saying mean things about Yolanda and not believing that she has Lyme disease and Yolanda doesn’t seem to care what Lisa has to say about her.

When Katherine and Lisa Vanderpump arrive at the party Yolanda decides to leave and she and Lisa V put their differences aside. The women discuss Yolanda’s Lyme disease after she leaves the party and Kyle thanks her for not addressing whether or not she was faking it at the party.

The women then start discussing who has posed in Playboy and it is discovered that Faye posed as well as Lisa Rinna. The discussion about what was written about Katheryn in Faye’s book is reignited and the debate as to whether or not Katheryn should confront her rages hot and heavy.

Katheryn finally decides to confront Faye and tells her that she feels that she is being phony by not confronting her about what she wrote. Faye tells her that she has nothing to say about it and doesn’t want to discuss it anymore. Faye says that it is something that should be discussed in private and that she didn’t mean to offend anyone. Katheryn says that it is “smart that Faye wants to move on.” And that “she will never be her friend.”