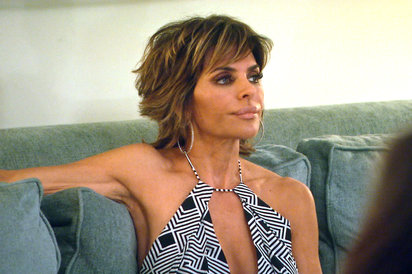 Tonight on Bravo The Real Housewives of Beverly Hills airs with an all new Tuesday, February 9, season 6 episode 11 called, “Please Welcome Erika Jayne!,” and we have your recap below. On tonight’s episode Kyle Richards and Lisa Vanderpump take a cold plunge and try cryotherapy with Yolanda M. Foster. Erika Girardi invites the ladies to see her wild alter ego perform in an over-the-top gay club in San Diego.

On the last episode, Kyle and Lisa Vanderpump plan their burlesque-themed joint anniversary party, but Lisa wasn’t happy when she found out Faye Resnick was on Kyle’s guest list. Later, Kyle got angry with Kathryn when she spoke out against Faye as well.

Still feeling guilty about bringing up Munchhausen’s disease to the other ladies, Lisa Rinna decided it’s time to tell Yolanda what was said. Did you watch the last episode? If you missed it we have a full and detailed recap right here for you.

On tonight’s episode per the Bravo synopsis “Kyle and Lisa Vanderpump take a cold plunge and try cryotherapy with Yolanda. Erika invites the ladies to see her wild alter ego perform in an over-the-top gay club in San Diego.

Accused of throwing Kyle and Lisa Vanderpump under the bus, Lisa Rinna goes on a mission to find out who said what to Yolanda.”

This week on The Real Housewives of Beverly Hills Yolanda invites Lisa V and Kyle to her Cryno treatments. Lisa is a bit nervous that she is going to freeze to death in the chamber, but the people who administer the treatment assure her that she will be fine. When the women get into the tank Lisa starts to freak out and Yolanda has a good laugh at her expense. Kyle doesn’t react as strongly but feels as though she is “skiing down a mountain naked.”

Erika prepares for her performance in San Diego. She is talking with her manager and tells him that the girls have an issue with a certain word and so they decide to incorporate that into the theme of the party.

Lisa R is on the phone with Harry and she is telling him about her planned trip to San Diego. She says that “she is not sure what to expect from Erika’s show.”

Kyle, Lisa V and Yolanda go out to lunch and discuss the trip to San Diego. Yolanda tells them that she is still not up to going on the trip because she is still healing. After the women order lunch Kyle brings up the comment about Yolanda having Munchausen. Yolanda asks them if they stood up for her during the conversation. Kyle tells Yolanda that they “know that she has been struggling.” Lisa V gets angry when Yolanda brings up the conversation that went on at the Bar B Que and tells Yolanda that she has “no idea what Lisa R is talking about because she would never say anything about her kids not having Lyme disease.”

Yolanda says that she has brought the children’s medical records for Lisa V to read and then apologize to her children. Yolanda is very upset and she tells Lisa V that the children would be “very upset about them putting any negative comments out there about her children.” Kyle is very upset that Lisa R brought them into the whole situation and doesn’t understand why she would drag them into the situation. Lisa V says that she is “just creating crap.”

Eileen and Katheryn meet up for lunch the two women seem to hit it off immediately. Katheryn mentions that Eileen used to date her ex Marcus Allen and Katheryn asks her when. Eileen tells her that it was in 88 or 89 and Katheryn says that she was dating him at the time. The two women laugh it off and move on to speculation about Ericka’s concert. Katheryn’s husband calls and updates her on the progress of their house in San Diego. Katheryn has decided that she is going to have a party at the house while the women are down in San Diego to show off the house. Katheryn and Eileen continue to have a good time at lunch.

Ericka is preparing to leave for San Diego on the tour bus. She has her stylist, assistant and dancers on the bus with her and they all enjoy glasses of Champagne.

The ladies meet up to get ready to head out to San Diego together for the concert. Lisa V asks them about the place they are going to and Lisa R tells her that she learned on google that it is a gay club with a “pervert night.”

In the limo Lisa V confronts Lisa R about what she said to Yolanda and how upset it made her. Lisa R tells them that she didn’t say anything about Kyle and Lisa V. The ladies continue to discuss it and they realize that someone else may be stirring the pot.

Ericka calls Yolanda to tell her that she is missed in San Diego and Yolanda thanks her for her heartfelt words.

When the ladies arrive in San Diego they are escorted to beautiful rooms. Eileen goes to visit Lisa R and they are discussing the situation with Yolanda. Lisa comes to the conclusion that Ericka was the one who told Yolanda that she said something about her children not having Lyme disease. Lisa gets very upset and vows to address the situation that night.

Ericka heads to the club to get ready for her performance. The women meet Kyle’s best friend Maureen before they go to the club. Eileen asks if they are ready for the show and the women say no. Katheryn claims to have “lost her hearing during her divorce.” She calls it selective hearing but tells the women that she is going to the Dr. for it.

Lisa is determined to clear her name and find out who told Yolanda about her children not being sick. Eileen tells the girls that they believe it could have been Ericka. When they get to the club they are awed by what they see. The women are excited to see what Ericka brings to the stage and what her show will be like.

As Ericka prepares to go on stage The reactions of the women vary. Lisa V is not impressed, Kyle seemed to enjoy the show immensely and Lisa R says that “she was prudish walking into the club, but she can see why the gays love her.” Kyle says that Ericka “lived up to her expectations.”

On the bus after the show the ladies congratulate Ericka on the show. Katheryn tells her that she doesn’t like her necklace, but Ericka stands up for the word written on her necklace and tells her to get over it. When they get to the hotel Lisa R confronts Ericka about the fact that Yolanda confronted Kyle and Lisa V about her children being sick. Lisa tells Ericka that she did not tell Yolanda that her kids did not have Lyme disease. Ericka denies saying it. Eileen confronts her about the comment and the fight is on. As the yelling continues Ericka decides that she doesn’t want to discuss it “because she is celebrating her performance. Lisa R says that she is done with it and the women decide to have drinks.

Lisa V is suspicious of Ericka because she doesn’t want to discuss the topic. Lisa R is very frustrated about the whole confrontation and so the ladies decide to leave. Kyle and Lisa V decide that they don’t want to talk about it anymore that night and the ladies go to bed after Kyle has an accident and breaks plates on a room service cart in the hallway.