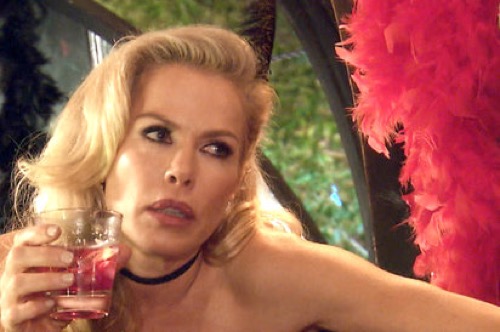 Tonight on Bravo The Real Housewives of Beverly Hills airs with an all new Tuesday, February 2, season 6 episode 10 called, “Backwards in Heels,” and we have your recap below. On tonight’s episode Kyle Richards and Lisa Vanderpump plan their burlesque-themed joint anniversary party, but Lisa isn’t happy when she finds out Faye Resnick is on Kyle’s guest list.

On the last episode, Lisa Vanderpump took a tour of the space that Ken wanted for a new restaurant, and it turned out to be a sex shop! Eileen flies to Italy to spread her sister’s ashes. Kyle hosted a BBQ where the main course was confrontation: Kyle and Lisa Vanderpump question Yolanda’s claimed that her children have Lyme disease, and Kathryn finally confronted Faye Resnick about a 20-year-old grudge. Did you watch the last episode? If you missed it we have a full and detailed recap right here for you.

On tonight’s episode per the Bravo synopsis “Kyle and Lisa Vanderpump plan their burlesque-themed joint anniversary party, but Lisa isn’t happy when she finds out Faye Resnick is on Kyle’s guest list. Later, Kyle gets angry with Kathryn when she speaks out against Faye as well. Still feeling guilty about bringing up Munchhausen’s disease to the other ladies, Lisa Rinna decides it’s time to tell Yolanda what was said.”

This week on The Real Housewives of Beverly Hills Lisa V and Kyle have a confrontation over the fact that Kyle invited Faye Resnick was there and Kyle tells her to get over the whole deal. Lisa asked Kyle if she invited “Witchiepoo” to the joint anniversary party that she and Kyle will be having to celebrate their anniversaries. Kyle says that she would ” put things to the side and move forward.”

Yolanda and Erika go for a walk on the beach and they discuss the events at Kyle’s party. Ericka tells her that “everyone was happy to see her.” Yolanda asks her about what happened after she left and Ericka tells her that Lisa V and Kyle were talking about her children’s illness behind her back. Yolanda is very upset and says that she “wishes that people would use the energy that they spend talking about her to come and help her.” Yolanda also tells Ericka that Lisa R called her and invited her to have lunch or some type of meeting with just the two of them . Ericka says it’s time for “Lisa R to come clean about the things she has said about Yolanda especially if what she said about wanting to be her friend is true.”

Kyle and Lisa V are out looking at venues for their Moulin Rouge themed anniversary party. Kyle asks Lisa to input some information into her phone and Lisa decides to go through the phone and see what Faye had to say about her in texts. Kyle doesn’t allow her to do that. When they get to the venue it is absolutely beautiful. Lisa V decides to back off and let things be after she has told Kyle how she feels about Faye being at the party otherwise ” she might be accused of holding a grudge.”

Lisa R arrives at Ericka’s house and is amazed at her house. Ericka took Lisa on a tour of the house and Lisa called it ” exquisite and old money done right. “ She also says that it makes Lisa V’s house look like a disco. Ericka takes Lisa upstairs and shows her the chapel she has built in the house and she is amazed. Lisa goes to see Ericka for tips on how to approach Yolanda and say the things she needs to.
Katheryn and Donnie head to the gym. She worries that because she is nine years older than him he could lose interest in her. She admits to Donny that she is not looking forward to seeing Faye at the Moulin Rouge party. Donnie asks her how she feels about seeing Faye at the party and she tells him that she is not looking forward to it. She says that she will always remember the things that Faye wrote about her in her book.

Ericka is working on her music. She talks about being a performer being more than Rhinestones and glamour and how she has to keep her “instruments sharp.” She is preparing for her performance in San Diego where all the ladies will be there to see her.

Eileen is preparing for the Moulin Rouge party, but after returning from Italy and scattering her sister’s ashes she is exhausted.

Lisa R and Yolanda met up at Yolanda’s house. Lisa admits that it is “hard for her to go to Yolanda’s house and be completely open and honest.” Lisa starts out by telling Yolanda that she is not comfortable with some of the conversation that has been going on and admits to participating in some of that conversation about Yolanda. Lisa tells Yolanda that someone mentioned the word

Munchausen’s disease and Lisa tells her that the disease is when people make themselves sick. Yolanda tells her that “no one is perfect.” Lisa admits to feeling like crap for even thinking that Yolanda could have this disease. Yolanda forgives her and the two of them seem to leave things on good terms.

On the day of the party Kyle is getting ready to celebrate her and her husband’s twentieth anniversary. When Kyle emerges in her outfit he is super impressed and tells her how sexy she looks. Lisa V and Kyle and their husbands leave for the party. Lisa and Kyle are both impressed with each others outfit.
Katheryn and Ericka are riding to the party together and Ericka tells Katheryn about the conversation she had with Lisa about Yolanda. Katheryn is shocked when she hears that Lisa participated in a conversation about Yolanda possibly faking her illness just to get sympathy.

Everyone arrives at the party and Lisa and Eileen arrive together. Eileen comments that they look like “cheap hookers. Lisa laughs and says “not cheap, but expensive hookers.”

Katheryn gets upset when she hears Ericka use a word she considers obscene and tells her “not to talk like that because that is the lowest word that you can call someone.” Ericka says that “Katheryn needs to stop correcting her because she doesn’t care and she’ll use that word as often as she can and whenever she wants.”

Faye arrives and Lisa V makes the comment “What would an anniversary be without Faye Resnick?” Faye simply says hello and goes on through the party.

Lisa asks if Yolanda will be there and is told that she won’t. She says that she feels better now that she has come clean and she and Yolanda have put it behind them.

The party continues as the two couples celebrate their anniversary. Katheryn is not happy when Kyle reveals that Faye is at the party. Katherine begins to question Kyle because of what she believes about Faye and the fact that she wrote a book that mentioned her and her ex husband. Kyle and Katherine have an altercation about the whole ordeal and Katheryn says that “no one will ever change her mind about Faye.” Kyle fires back and tells her that Faye “may never change her mind about that time period, but it was 21 years ago and they need to move on.”

Kyle and Taylor are having a conversation and Faye overhears. Lisa V walks up and takes Katheryn’s side saying that Faye is wrong. The confrontation escalates and Lisa is reminded of what happened the last time she decided to side with one of the new girls in the group. The woman turned on her and hurt her feelings.