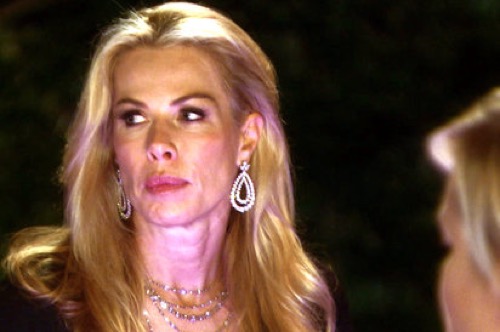 Tonight on Bravo The Real Housewives of Beverly Hills airs with an all new Tuesday, March 15, season 6 episode 16 called, “Hearing Is Believing,” and we have your recap below. On tonight’s episode the women support Camille Grammer’s cancer charity by shopping for diamonds; Lisa Vanderpump rallies her friends for a march.

On the last episode, Erika hosted a dinner party to introduce her husband, Tom, to the ladies, and Kathryn received positive news during a hearing test. The ladies got their hands dirty doing charity work. Yolanda was criticized for hanging out with Kim and Brandi. Lisa Rinna shocked Eileen by revealing her thoughts about some of the ladies. Did you watch the last episode? If you missed it we have a full and detailed recap right here for you.

On tonight’s episode per the Bravo synopsis “the women support Camille’s cancer charity by shopping for diamonds; Lisa Vanderpump rallies her friends for a march; Lisa Rinna admits to having trust issues; some of the women head to New York in Erika’s private jet for Yolanda’s Lyme disease gala.”

This week on The Real Housewives of Beverly Hills Yolanda is preparing for her gala in New York. She is worried and nervous because her children will be there. She has been working on her speech for the last two weeks and still doesn’t have it perfected.

Katheryn and her husband go back to the Dr. to get the device that will help the hearing in her right ear. She is very excited when they put the device in her ears and she is able to hear the Dr. and her husband more clearly. Katheryn tells them about the altercation with Ericka and about how Ericka thought that she was yelling at her. Katheryn wonders if she was a bit too aggressive and needs to apologize.

Kyle and Eileen head to Lisa V’s to pick her up to go to Camille’s house for a lavish event to help deal with cancer featuring Tahitian Diamonds.  When the ladies arrive at the party everyone is marveling about Yolanda’s new haircut. Lisa R is worried and scared about running into Yolanda due to their past confrontations. Lisa says “When it comes to Yolanda you never know what you are going to get. I don’t trust her.”

As the event continues the tension between Yolanda and Lisa becomes palpable. Yolanda says “After being isolated for so long I almost feel like I have a psychic energy.” Lisa and Yolanda sit down to talk and Lisa tells her that she feels hurt that Yolanda is being shady in her friendship. Yolanda tells her “I am more loyal to Kim and Brandi because they have helped me more on my journey than any of you.” Ericka feels hurt that Yolanda is out with them rather than coming to her dinner.

The other women confront her about seeing her out with Kim and Brandi and then her telling Ericka that she was too sick to come to her dinner party that night. Even Ericka questions the whole event. Yolanda tells Lisa “This is between Ericka and I and I don’t think I have to explain anything to you.” The ladies are all uncomfortable and Lisa R leaves.

Lisa V is organizing a march to protest the unfair and brutal treatment of dogs. Katheryn shows up to help Lisa plan and she asks Katheryn to ask Donnie if he can have any celebrities come to the march. Katheryn says “I really like Lisa V because she’s funny, smart and has her stuff together. I don’t know why Ericka is so suspicious.” Lisa V expresses the same sentiments about Katheryn.

All of the ladies and their husbands get together to have dinner. Kyle announces that Ericka won’t be there because she doesn’t feel well. Mauricio congratulates the ladies on their work for the Habitat for Humanity. Kyle announces that she wants the ladies to go to Dubai with her and Ericka. Ken tells the party he has to leave to go deal with his mom. Eileen tells Lisa V that she won’t be able to go to the march because “I need a day off because I have been working so much.” Lisa tells her it’s ok, but the tension is once again thee.

Eileen decides to cut to the issue and tells Lisa V that she knew that Lisa R had told her that Eileen said that she was manipulative. Lisa tells Eileen “I didn’t force Lisa R to go shopping with Kim in Amsterdam.” Eileen says “Here we go again. Lisa V is deflecting the issue on to Kim when it is all about her.”  The argument rages on and finally Katheryn lightens the mood by threatening to turn her hearing aide off.

Yolanda, her family, Katheryn, Kyle and Ericka all get ready to head to New York on the private jet. Kyle brings up the trip to Dubai and invites Yolanda, but she turns it down and says “I don’t want to go and not be well.

Eileen and Lisa R go on a shopping trip. Back on the plane the ladies are discussing the issue between Eileen and Lisa V. Kyle says “The differences between Eileen and Lisa V are cultural. Eileen and Lisa say that Lisa V “never really apologized for her over curiosity.” Eileen addresses Lisa’s inability to stand up for herself when she is with the group. They also talk about the events of the night before. They both wonder if Lisa’s bringing up the fact that Lisa R told Kim she loved her was a way to deflect the attention off of her.

In New York everyone heads up to the jewel suite and they are excited. Yolanda sits down and begins to play. Her husband comes over and says “It can get better with a little help.” The two of them then play together. Katheryn and Ericka arrive at the suite and they are amazed. Yolanda says “I am not allowed to buy jewelry for myself. I have to take a picture and send it to his secretary with a note asking her to show it to Tom.”

The group heads upstairs and are stunned and amazed by the beautiful view. Tom and Yolanda both make toasts of love to each other and their friends and family. Tom tells her “We are going to make big lemonade tonight.” He then tells everyone to go ahead and enjoy the Jacuzzi that is on the roof. Yolanda is very greatful for Ericka’s support and love when she needed it.