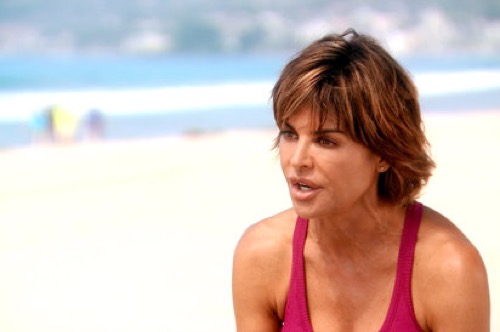 Tonight on Bravo The Real Housewives of Beverly Hills (RHOBH) airs with an all new Tuesday March 8, season 6 episode 15 called, “Objection, Your Honor,” and we have your recap below. On tonight’s episode Erika Girardi hosts a dinner party to introduce her husband, Tom, to the ladies, and Kathryn Edwards receives positive news during a hearing test. The ladies get their hands dirty doing charity work.

On the last episode, Yolanda hosted a dinner party attended by a music guest; Eileen was upset because Lisa Rinna won’t come clean about her feelings; Erika was leery of Kathryn who betrayed a confidence to Lisa Vanderpump; Kyle and Kim came face to face after nine months. Did you watch the last episode? If you missed it we have a full and detailed recap right here for you.

On tonight’s episode per the Bravo synopsis “Erika hosts a dinner party to introduce her husband, Tom, to the ladies, and Kathryn receives positive news during a hearing test. The ladies get their hands dirty doing charity work. Yolanda is criticized for hanging out with Kim and Brandi. Lisa Rinna shocks Eileen by revealing her thoughts about some of the ladies.”

This week on The Real Housewives of Beverly Hills Erika is planning a dinner party so that the ladies can meet her husband Tom. Yolanda calls Ericka and Ericka immediately senses that Yolanda is not feeling well. She tells Yolanda that she doesn’t have to come to the dinner.

Katheryn and Lisa R are heading over to Ericka’s to attend the dinner. Katheryn says “I am really looking forward to meeting the husband.” Lisa says she is too and they continue on their way.

Ericka is meeting with the caterer and tells them that “We are down to six.” Kyle has her children and Eileen is working on The Young and The Restless. When the ladies arrive Ericka is upset that Lisa R is wearing Leopard print. She says “These ladies are encroaching on my territory.” Tom comes in and Ericka introduces him to the women and their husbands. Lisa V reminds Tom of his comparison of her to an alligator. Katheryn asks Tom why he wanted to become a lawyer. He tells her it was because of watching Perry Mason on TV. Everyone is having a good time until Katheryn starts to get out of line.  Lisa V accuses Katheryn of being the one to stir things up and Katheryn tells her “It’s called a sense of humor.” Lisa R says “There are manners and ways to handle yourself in other people’s homes and Katheryn is not behaving appropriately.”

As the dinner party continues Lisa V mentions that Ericka doesn’t really show her emotions. Ericka says that “It takes her time to open up.” Katheryn jumps in and says “I am only good for a couple hours of foreplay and then I am bored.” Ericka and Katheryn are arguing because Katheryn wants Ericka to be her friend. She tells Ericka to “Throw her a bone.” Ericka tells them that “I don’t have a heart of stone.” Lisa V says “Sometimes it comes off that way.” The argument gets more intense and Ericka is upset that the ladies are ganging up on her.

Ericka feels angry and confronts Katheryn about the things that she said to Lisa V. Katheryn gets loud and starts yelling at her. Tom tries to diffuse the situation by saying “Sometimes things that are said can be misconstrued.” Lisa R comments that “This is highly inappropriate to come to someone’s home and meet their husband for the first time and stir the pot.”

The dinner party ends and everyone leaves. On the way out Lisa V tells Ericka to “Do what you want to do, not what’s right.” Lisa R and Katheryn are waiting for the car to take them home. Lisa says “Katheryn likes to stir things up, but at a certain point I am just over it. I want to go home, I want my own bed and I want to be done with this. Ericka says that overall “I would rate tonight’s dinner party a negative five and I won’t be doing that again.”

Kyle and Ericka are at Kyle’s together. Kyle tells Ericka about their involvement with Habitat for Humanity. Kyle asks Ericka about the previous night’s dinner party. Ericka tells her that it was terrible. She tells her that Lisa V and Katheryn gang up on her. Ericka tells Kyle that “Tom is pissed at her this morning because of the way the party went and how she behaved. “ Kyle is surprised to hear this because she never thought Ericka was the type to “obey her husband.”

Eileen and Lisa meet up at the beach to catch up. Eileen is telling her about the scenes that she is shooting. Eileen says she wants to talk to Lisa about the awkward events at Yolanda’s dinner party. Lisa admits that she was wrong for keeping quiet about Lisa V’s ability to manipulate things. Lisa tells Eileen that Lisa V and Kyle had exchanged pictures back and forth and them saying that Yolanda has Munchausen’s. Lisa says that ” I have allowed myself to be manipulated and used.” Eileen is shocked to hear everything and worries about Lisa R bringing Lisa V and Kyle into everything.

Lisa and Eileen continue to talk and Lisa says that Yolanda uses her sickness to get away with things. Eileen says that because Yolanda is sick she has to give her a big pass. Eileen doesn’t agree with her and says that “Those are not her experiences with Yolanda.” Lisa says that she thinks that “Yolanda is more manipulative than anyone and her gut is telling her to run for the hills.”

Katheryn goes to get her hearing tested because she is having ringing in her ear. She says “I am completely deaf in my right ear so I tend to sit people that I don’t want to talk to directly to my right.” When the test is finished the Dr. tells her that there is a new device that can transmit the sound from her good ear to her bad ear. Katheryn is happy to hear this and the Dr. tells her that she can use this device on a trial period.

Kyle goes to visit Yolanda and asks her about the purpose of the email. Yolanda tells her that ” I wanted clarity in our friendships.” She also addresses the situation with Lisa R and says that “I just want to move on from that.” She tells Kyle that she was hurt when all the ladies were sitting around the table and discussing whether or not she was really sick Yolanda felt really hurt by that. Kyle says “I understand that Lisa and Yolanda may never be best friends, but Yolanda seems ready to move on.”

The ladies meet up at Kyle’s to go work on a Habitat for Humanity home. When the group gets to the house that they will be working on Kyle says “It’s going to be interesting to see ladies who don’t even paint their own nails do manual labor.” Ericka shows up and Lisa V thanks her for dinner. She says “It got a little awkward.” Ericka agrees and Lisa tries to make jokes with her but Ericka is not feeling it.

Lisa R asks Ericka how she felt about her dinner party and Ericka says “It was a party that I would rather forget.” Ericka says she was very upset by the way Katheryn acted in her home. Lisa R says that “Ericka has a right to feel the way she does because she would expect people to act respectfully in her home around Harry.” Eileen encourages Ericka to talk to Katheryn about how she feels. Eileen calls Katheryn over and Ericka tells her “I didn’t appreciate how you acted at my house in front of my husband.”

Katheryn asks her what she means and Ericka tells her that “addressing an issue that was really between the two of us in front of my husband who was meeting you for the first time was inappropriate.” Katheryn tells Ericka that “Tom was lovely.” Ericka says “Yes, Tom is lovely, but you wouldn’t know that because you spent the whole night talking.” Katheryn tells Ericka not to talk to her like that. When Ericka asks her “Like what?” Katheryn says “Like you are looking for a fight.” Eileen gets upset and confronts Katheryn telling her that “You have made it so that no one can trust you. If someone tells me something you would never hear it come out of my mouth.” Katheryn apologizes to Ericka and asks if she can hug her. Ericka says yes. She says “I don’t usually give second chances, but Katheryn seems genuinely sorry, but there won’t be a third.”