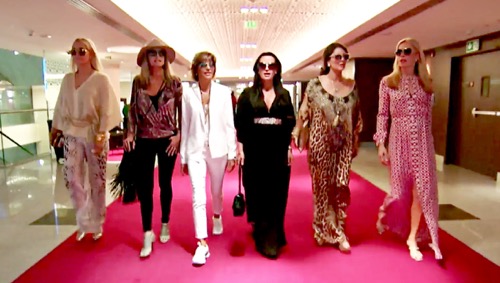 Tonight on Bravo The Real Housewives of Beverly Hills airs with an all new Tuesday, March 1, season 6 episode 14 called, “Not Easy to Love,” and we have your recap below. On tonight’s episode Yolanda Hadid hosts a dinner party attended by a music guest; Eileen Davidson is upset because Lisa Rinna won’t come clean about her feelings.

On the last episode, the women worked up a sweat in a spin class to raise money for charity and follow up the workout with a lunch full of allegations. Yolanda called out Kyle for gossiping at the table, then confronted Lisa Vanderpump for questioning her children’s health. Kathryn visited Erika at her house in an effort to gain her trust before heading to Lisa Vanderpump’s to reveal what Erika said about her. Did you watch the last episode? If you missed it we have a full and detailed recap right here for you.

On tonight’s episode per the Bravo synopsis “Yolanda hosts a dinner party attended by a music guest; Eileen is upset because Lisa Rinna won’t come clean about her feelings; Erika is leery of Kathryn who betrayed a confidence to Lisa Vanderpump; Kyle and Kim come face to face after nine months.”

This week on The Real Housewives of Beverly Hills Lisa R prepares for her daughter to have her tonsils removed because she is always sick and getting colds. The Dr. who will be performing the surgery calls Lisa to check and see if they are ready. Lisa asks if they still cut the tonsils out and her daughters both look grossed out. The Dr. tells her that they do cut and burn the tonsils. He also tells her that “We can show you the tonsils after they have been removed. Lisa is excited and says that she thinks she may want to see that.

Yolanda and her husband David are preparing for their dinner party at Wally’s. David is working on an arrangement of Ave Maria for Yolanda to sing at the party and they are excited about their special surprise guest.

Lisa V and Kyle meet up to discuss the events of the past week and Lisa tells Kyle that that she will try to put the argument with Yolanda she will make an effort to keep the peace with her when they go to the party.  Kyle also talks to Lisa about her relationship with her sister Kim. She tells Lisa that “Our relationship is better and we text back and forth occasionally now.”

At Yolanda’s dinner party the table is ripe with tension. Eileen says that “She and Lisa V did not end on a good note, but in typical fashion they will pretend like nothing happened.” Ericka is thrilled to meet Harry Hamlin. Ericka is upset that Lisa V and Kyle confront her about a comment that Ericka made to Yolanda. Ericka gets defensive and tells Lisa that she “feels like Lisa is trying to discredit her friendship with Yolanda.” Lisa V is upset and decides to break off the conversation with Ericka.

Katheryn and Ericka are talking about the confrontation that Ericka had with Lisa. Ericka is upset that Katheryn went back and told the other ladies what she said about getting caught up in Lisa V’s web. Katheryn tells her that “If you say it to me you can expect that I am going to go back and tell the other women.” Ericka tells her “Yes I understand that now.” and walks away from her. Ericka is very hurt by Katheryn’s betrayal because she thought they were friends.

David tells everyone that he has a surprise for them and introduces Andre Botticelli to come and preform. Kyle gets emotional because her mom told her that she would give her a sign when she wanted her to do something. Kyle felt that Andre singing her mother’s favorite song was a sign that she needed to go check on her sister.

On the day of Amelia’s surgery Lisa R is very nervous. She calls Harry and tells him that she has just gone into surgery and she is worrying. Harry tells her to call him back when it is over. Lisa paced until the Dr. came out and told her that the surgery was done and successful. Only then was she able to breathe a sigh of relief.

Kyle is hanging out with her daughters making dinner. When they sit down to dinner Bambi, the dog, tries to eat food off the table. Kyle talks to Mauricio about her relationship with her sister Kim. She tells him that Kim looked good interacting with her children and having a good time. Kyle also talks about going to Ireland to explore her mother’s Irish roots. Mauricio says that “I would love to go to Ireland.”

Yolanda meets Ericka and Eileen to hang out. They talk about the party from the night before. Eileen tells them that the party was a little weird, but she still had a good time. They also talk about the incident between Katheryn and Ericka and Yolanda says “If you confide in another woman that woman should keep it to herself, so I think Katheryn has burned some bridges.”

Lisa meets up with Yolanda’s ex Mohammed to find a house for Harry. Lisa V is worried that her friendship with Mohammed is affecting her ability to be friends with Yolanda. Lisa V says that if she had to decide where her loyalties lie they would lie with Mohammed.

Eileen, Yolanda and Ericka continue to discuss the situation with Lisa V. Eileen says “Lisa R’s reaction to the comment about Lisa V being manipulative and thinking she can control people was over the top.” Ericka tells them that she thinks Lisa likes thinking she can manipulate and control people. She also says that Lisa “likes to think of herself as the puppet master.” Eileen says “People shouldn’t underestimate Ericka because she is smarter than people give her credit for.”

Katheryn meets up with her sisters Anne and Debbie to have lunch. Katheryn says that her mom has early onset Dementia. The sisters are talking about her illness and how they try to keep her on track. The women worry that they don’t see their mom enough and that she is too isolated.

Kim shows up at Kyle’s house and Kyle is a bit standoffish due to the strain between them. Kim says that she is “Stronger and in a healthier place.” They talk about former housewife Brandy and Kim says that: she gets stuck between letting it go and wanting to talk it through.” Kyle says that “We need to talk it through and work through the issues without the interference of others.” Kim tells her that the times that they don’t talk are really hard. Kyle cries as she tells her sister “ I feel like you hate me and I have some feelings of resentment too for the periods that they don’t talk.” Kim tells her “I don’t hate you. I love you and we need to change the pattern of not talking for long periods of time.” Kyle blames the majority of their issues on Kim’s sobriety. The two of them hug and agree to try and work on their issues.