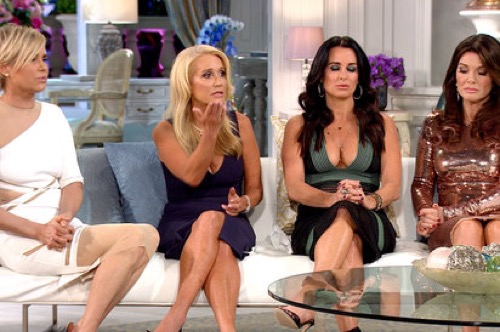 Tonight on Bravo The Real Housewives of Beverly Hills continues with an all new April 26 season 6 episode 22 called “Reunion Part Two” and we have your recap below. On tonight’s episode the reunion picks up with Yolanda Foster taking some of her friends to task for questioning her health issues. Tears are shed and apologies are made.

On the last episode, the gorgeous and glittering ladies of Beverly Hills met with Andy Cohen for a gripping three-part reunion that began with some fun insights into new housewife Erika Girardi, a.k.a. Erika Jayne. Kyle defended her friend Faye Resnick when Kathryn’s connection to the OJ Simpson trial was discussed, and Yolanda opened her heart about her pending divorce from David Foster. However, further conversation about her health became too much for Yolanda, leading to a surprising moment. Did you watch the last episode? If you missed it we have a full and detailed recap right here for you.

On tonight’s episode per the Bravo synopsis “the reunion picks up with Yolanda taking some of her friends to task for questioning her health issues. Tears are shed and apologies are made. Old wounds are opened when Kyle’s sister Kim Richards returns to talk about her difficult year that’s been splashed through the tabloids. When Eileen confronts Lisa Vanderpump about not understanding her, Lisa breaks down in unexpected tears.”

Tonight’s episode is going to be filled with more crazy housewife drama that you won’t want to miss, so be sure to tune in for our live coverage of the show tonight at 9 PM EST! While you wait for our recap hit the comments and let us know how excited you are about this episode of The Real Housewives of Beverly Hills! How do you think this sixth season is going to play out?

This week on part two of The Real Housewives of Beverly Hills Lisa R talks to Yolanda about the Munchausen story. She also confronts Lisa V about the fact that she called her and told her to bring up Munchhausen Syndrome. Lisa V denies this rumor and Lisa R tells her “Own it Lisa.” Yolanda gets upset and leaves the stage. Meanwhile on stage the argument continues to get heated. Andy decides to step in. When Yolanda comes back he tells her “We are hearing two different stories about the Munchausen rumor. Who do you believe?” Yolanda says “I don’t know who to believe.” She tells Lisa V “You are a beautiful person, but you can also be a manipulator.” Andy then asks Yolanda “Does that mean that you believe that Lisa V said it?” Yolanda hesitates and says “It’s possible that she said it.” Lisa R gets really angry and frustrated and yells at Lisa V “Just own it Lisa. You know you said it just own it.” Lisa R gets so frustrated and has to leave the stage for a few minutes.

As the conversation continues between Lisa V, Yolanda and Kyle Yolanda asked Lisa V “What did Anwar tell you about the children?” Lisa V responds “He said they were fine.” Lisa V then admits that because of the situation she and Anwar no longer speak. Yolanda gets very upset and tells them all “It doesn’t matter who said it. The fact was that I had all of this information.” The ladies continue to argue until Yolanda says “I didn’t want to be sick all the time. but if my journey helps soften one heart then I am glad.” Andy says “On that note it is a good time to take a break.” As they go to break Lisa R approaches Yolanda and says “I hope that we can put this behind us one day and move forward because I really am sorry.”

When they return Kim joins them on stage. Andy asks her about the death of her ex husband Monte. Kim says “As much as I knew it was coming I didn’t expect it when it happened.” Kyle says “I know it was hard on her and my niece Brooke.” Kim cries as she watches the footage. Andy asks her “Where do you stand in your recovery?” Kim says “I am choosing to keep my recovery private because there are some things that are not for public consumption.” Kyle tells Kim “Even when I didn’t like you I always loved you.” Andy asks Kim “Do you feel like you are hard to love?” Kim says “Yes because of what I put my family through.”

Kim turns to Lisa and tells her “I felt attacked by you and when I came up to you at the final party to try and talk to you it was because I wanted to clear the air.” Kim tells Lisa “You really hurt me and I just wanted to clear the air.” Lisa says “I’m sorry that I was hard on you.” Andy asks Lisa R “Do you think you have some accountability for the things you said about her?” Lisa R says “No. Why should I be accountable?” This creates an uproar on the couch and Lisa says “I wish Kim nothing but the best. I hope she gets well and finds love and happiness in her life. I lost my sister to addiction so I know what it looks like.”

After hearing this Erika jumps in and says “Then why aren’t you more sensitive to her?” Lisa R says “Maybe I’m human.” Yolanda says “You have to be careful how you judge people.” Eileen turns to Kim and says “We didn’t invent your behavior. We all clearly saw it.” Kim tells Eileen “You were right there behind her and it hurt because I really liked you.”

Kathryn says “I didn’t want Kim to think that not everyone was behind her.” Andy asks Kim about her shoplifting arrest and Kim says “I can’t talk about it because it is an open case.” Andy asks her if that was the low point in her life. Kim says “The low point was when I took that first drink.”

Andy confronts Lisa about her blasé attitude toward the things Lisa R said about her. He tells her “What I am feeling, especially from Yolanda, is that you are just sweeping things under the rug.” Yolanda says “I had lunch and talked with my girlfriend. I didn’t have to call the group and get permission.”

Andy asks Kathryn how her new hearing devices are working. She tells him “They are working great even though I forget to wear them sometimes.” Andy asks the ladies about the parties they had. Andy asks Erika “What does Tom think of those shirtless boys in the pool?” Erika laughs and says “Not much.” Andy asks Kyle to define a Barbecue for him. Kyle says “A barbecue is when people eat outside.” Erika defines it as “Cooking on the grill, Liquor and cute boys.” Lisa R says “I am going to have a real barbeque next year.” Andy says “Eileen you said you and Lisa R looked like hookers at the Moulan Rouge party. Who looked the most like a hooker?” Erika speaks up and says “Well I’m out because I always look like a hooker.”

They are talking about the issues between Lisa V and Eileen. After watching the footage and hearing Lisa V say that her apology was insincere and she didn’t mean it Eileen says she feels “Vindicated.” Andy asks Lisa V “Why do you think Eileen is upset?” Lisa V says “I don’t know why she was so upset.” This upsets Eileen and Lisa R. Lisa R says “It’s about the fact that you don’t understand her feelings or respect them.” Eileen says “I think we are just two different planets and we will never meet.” Eileen then tells Lisa V “I think you are manipulative.”