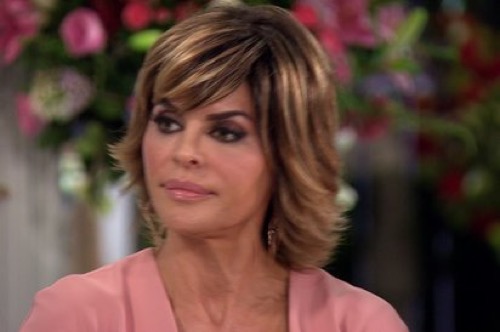 Tonight on Bravo The Real Housewives of Beverly Hills airs with an all new Tuesday, April 19, season 6 episode 21 called, “Reunion Part One” and we have your recap below. On tonight’s episode the gorgeous and glittering ladies of Beverly Hills meet with Andy Cohen for a gripping three-part reunion that begins with some fun insights into new housewife Erika Girardi, a.k.a. Erika Jayne.

On the last episode, the women headed to a party at Kyle’s desert home; tensions arose when Lisa Rinna came face to face with Kyle’s sister, Kim. Did you watch the last episode? If you missed it we have a full and detailed recap right here for you.

On tonight’s episode per the Bravo synopsis “the gorgeous and glittering ladies of Beverly Hills meet with Andy Cohen for a gripping three-part reunion that begins with some fun insights into new housewife Erika Girardi, a.k.a. Erika Jayne.

Kyle defends her friend Faye Resnick when Kathryn’s connection to the OJ Simpson trial is discussed, and Yolanda opens her heart about her pending divorce from David Foster. However, further conversation about her health becomes too much for Yolanda, leading to a surprising moment.”

Tonight’s finale is going to be filled with more crazy housewife drama that you won’t want to miss, so be sure to tune in for our live coverage of the show tonight at 9 PM EST! While you wait for our recap hit the comments and let us know how excited you are about this episode of The Real Housewives of Beverly Hills! What do you think of this sixth season so far?

This week on part one of The Real Housewives of Beverly Hills Reunion Andy starts off the reunion by introducing all of the women and complimenting them on how fabulous they look. Andy asks Kyle about buying sunglasses for her store. Kyle says “I was shopping for my store. I would never spend that much for a pair of sunglasses for myself.” Andy asks the women if they have ever spent more than $600 on a pair of sunglasses. Both Lisa R and Lisa V admit to having done that.

Andy moves on to talk to Erika. He asks her “How has being on the show affected her Erika Jayne persona?” Erika says “It has been more positive than negative.” Andy asks Lisa V why she gave Erika a hard time about being married to a man older than she is when Ken is 16 years older than she is?” Lisa responds “I didn’t mean to give her a hard time. It was just a bit shocking.” Andy then reveals that Erika has been married before and has a son who is a police officer. When he asked her why they didn’t see him on the show Erika responds “He is a very private person.” Andy then asks her how he feels about her Erika Jayne persona. She answers “He is very supportive of me just like I was when he told me he wanted to be a police officer. Imagine what it’s like to have your child come tell you he wants to do such a dangerous job.”

When they return Andy reads an email asking Erika “Why so sexual and aren’t you a little old to be prancing around like that?” Erika responds “I am not to old and I’m sorry that you have given up on life, but I have not.” They move on to talk about her “Erika Jayne” personality. Erika says “I am not that person when I am at home with Tom. I am just Erika Girard.”

They move on to talk to Yolanda about the relationship between her and David and the subsequent divorce. Andy asks her “Why did you decide to divorce?” Yolanda tells him “It didn’t happen out of nowhere. It came over time. I wasn’t the wife I was supposed to be nor the mother I was supposed to be.” Andy asks her “What do you think of those who criticize him for not wanting to be with you now?” Yolanda responds “People shouldn’t criticize him. Being sick not only takes it out of you, but it also takes it out of your caretaker.” Lisa V asks Yolanda “Did you see it coming or were you blindsided?” Yolanda says “We aren’t going to sit here and dissect my marriage.”

Andy asks Yolanda “If it weren’t for your illness do you think you and David would still be together?” Yolanda says “Yes we probably still would be.” Andy asks Erika if Yolanda had confided in her about their marriage. Erika says “Out of respect for my friend I haven’t answered that question and I won’t answer it now.” Andy asks Kyle if she thinks that Yolanda’s health could have been affecting her health. Kyle says “I am not a Dr. but I know after my mom’s death I experienced physical symptoms of depression. I think that Yolanda’s health was affected by the troubles in her marriage.” David asks Yolanda if she will ever get married again. Yolanda says “No I don’t think so. My focus is on my children and getting to see them in fashion shows in Paris.”

Andy moves on to talk to Kathryn. Andy asks Kyle “What upset Faye Resnick the most about the way she was portrayed on the show?” Kyle says “I think she was upset that she was portrayed as a bad person and she is a good friend and a good mom.” Eileen asks Katheryn “Tell us how this affected your life and your marriage because you lived it.” Kathryn says “My husband and I were portrayed as bad people and I did not like it.” Kyle says “I don’t want to talk about what happened 21 years ago or someone who is not signed up in this arena.” Andy reads a passage from Faye’s book and Kathryn says “I don’t know where she got that from because Faye and I didn’t really know each other.”

Kyle gets very upset and defends Faye. They move on and address the issue of Katheryn calling Lisa R out on her eating habits. Katheryn responds by saying “I am not a bully, but I am not a playful person. I think I did it because I felt safe with you.” Lisa R says “I figured that was what it was.” They move on to talk about the death of Katheryn’s father. Andy asks her “Why did this impact you so profoundly?” Katheryn starts to cry and the other women gather around her to comfort her. She says “The death of my father changed our family profoundly. I am very sensitive to this subject because we just lost my nephew six weeks ago to a heroin overdose.”

When they return Andy addresses the issue of Yolanda having Munchausen Syndrome Andy asks Lisa R why she had so much trouble with Yolanda’s Instagram posts. Lisa V steps up and says “It is because of the way Yolanda would post. Sometimes she would look sick and other times she looked fine.” One of the viewers emails also questioned Yolanda’s issues because of how active she appeared at certain points in the show. Andy asks Lisa R if she still “Felt that Yolanda used her being sick to get ahead.” Lisa R says “On some level I do.”

Andy asks Yolanda how she feels about her friendships on the show after they spent the entire season questioning her health. Yolanda says “I feel a bit sketchy.” Eileen responds “We want to do whatever it takes to make you feel comfortable to open up to us about your health issues.” Yolanda tells her “How can I feel comfortable when you guys are always talking about me?” Yolanda asks Lisa “What was the basis for your thought process?” Lisa tells her “I am going to be really honest. At my birthday party you came with no makeup and Ken said you looked terrible. Harry tells him We need to support her whether she is sick or not.” Lisa R tells Lisa V “You encouraged me to say this and I did it and i’m sorry.” Yolanda gets upset and leaves the stage.