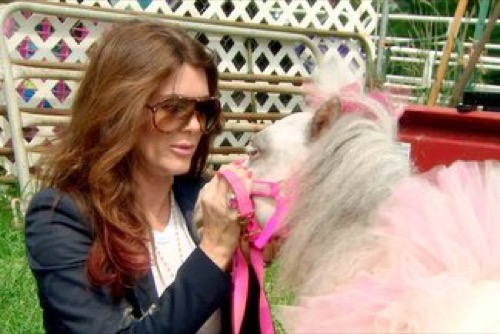 Tonight on Bravo The Real Housewives of Beverly Hills airs with an all new Tuesday, December 15, season 6 episode 3 called, “Horsing Around,” and we have your recap below. On tonight’s episode Kyle Richards returns from her European vacation and is greeted with more bad news about her sister Kim. Lisa Rinna and Lisa Vanderpump head off in a private jet to find the perfect mini-horse for Ken’s birthday present.

On the last episode, Kyle and Lisa Vanderpump were enjoying a fabulous time zooming through Italy in a Ferrari and taking in the tranquil countryside when family problems interrupted. Meanwhile, back in Beverly Hills, Yolanda took drastic measures to improve her health and Eileen and Lisa Rinna were stunned by her condition. Did you watch the last episode? If you missed it we have a full and detailed recap right here for you.

On tonight’s episode per the Bravo synopsis “Kyle returns from her European vacation and is greeted with more bad news about her sister Kim. Lisa Rinna and Lisa Vanderpump head off in a private jet to find the perfect mini-horse for Ken’s birthday present. Eileen struggles to get Vince’s help in balancing motherhood and her career. A new housewife has fun with Yolanda, but she also has a wildly intriguing double life. And back at Villa Rosa, everyone gets wet at Ken’s 70th birthday party.”

Once the dust had settled about Nicky Hilton’s wedding, Kyle and Lisa Vanderpump were friends again. It seems they had discussed what had happened more in depth behind the scenes and, by time their vacation came to an end, they had rebuild their relationship.

The adults had gone on to all have dinner together and the ladies had also gone out shopping later for a dress for Kyle. Seeing as she did still need one for the wedding. And afterwards, Lisa and her husband went on to Monaco while Kyle and two of her girls went on to London.

But when Kyle had returned home, she had a lunch with both Eileen and Lisa Rinna. And she was put in the awkward position of having to discuss Kim’s whereabouts.

Kim Richards as some of us may know had gotten into this big drunken scene reportedly after her daughter’s wedding. Then something involving a cop happened and Kim ended up going to rehab. Probably to save face.

However Kim didn’t quite stay there for the recommended thirty days. In fact Kim was reported to have fled the place and now no one knows what her condition is. Or where she was. So the ladies asked Kyle hoping she would have the answers. And she didn’t really have much to say on the matter.

Kyle is not someone that is typically comfortable with talking about airing her family’s dirty laundry so a quick topic change was in order. Although talking about Yolanda had also hit a nerve. Yolanda has been looking sicker by the day and Kyle happens to believe that some of her friend’s symptoms might actually be psychosomatic. As in maybe her depression about the Lyme disease could be causing to experience symptoms that don’t generally go along with the disease itself.

Kyle said she had a similar experience when her mother died so that’s why she keeps mentioning. Yet she keeps talking about it to everyone besides Yolanda. So maybe Yolanda should be the next person on her list.

Yolanda doesn’t get out all that much anymore and when she does it’s usually to go get a colonic or have a vitamin C injection. But the inject isn’t for the Lyme disease. Yolanda merely likes them and believes they help improve anyone either sick or healthy. Hence the last time she went – she took her friend Erika.

Erika is a new face. Though she’s actually known Yolanda for several years because their husbands happen to be very good friends. Erika on the other hand is quite a character.

She and her husband have been married for the last fifteen and half years. And when she isn’t being the wife of a famous lawyer, she’s a singer/ performer who has toured all over the states and has done tours abroad as well. So Erika has been technically on the scene for quite some time and now she’s on “The Real Housewives of Beverly Hills”

But Erika did not get an invitation to Ken’s birthday and that’s where all the fun happened. Ken turned seventy on tonight’s episode and Lisa wanted to go all out for him. She arranged a beautiful lunch for his birthday and as a present she was going to get him a mini-horse.

However the horse was lame and a bit on the chubby side. So Lisa had to scratch that gift despite flying miles out to see it and then it rained on the big day.

The party was outside but most of the people at the table were safe under a canopy. And so the rain didn’t ruin anything. If anything Taylor’s big mouth caused more of an issue than the rain. Taylor began to loudly discuss what was really wrong with Yolanda and that led to Lisa suddenly breaking into her toast.

She wished the love of her life a “Happy Birthday” and then the party moved to the veranda for the rest of English Tea. Though Kyle was left feeling a little bored so she went into the heated pool and was soon followed by the other ladies. And then someone had pushed Ken in so he got to enjoy his birthday in the pool being carried by a group of beautiful women.

And Lisa said that’s a birthday he won’t be forgetting anytime soon.