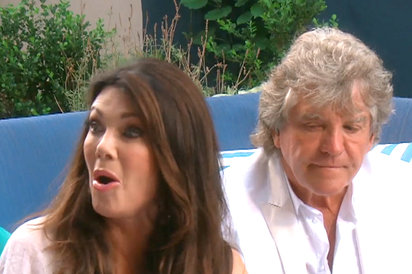 Tonight on Bravo The Real Housewives of Beverly Hills airs with an all new Tuesday, December 27, season 7 episode 4 called “Pantygate” and we have your RHOBH recap below. On The Real Housewives of Beverly Hills season 7 episode 4 as per the Bravo synopsis, “Erika Girardi’s wardrobe malfunction comes into question. Meanwhile, Lisa Rinna oversees a 24-hour garment-selling marathon, Erika explores a future in acting with Eileen Davidson and Dorit embarks on a risky maneuver to confront Erika.”

On this week’s episode of Real Housewives of Beverly Hills Kyle meets Lisa V at the bar to discuss the animal rights march they did last year. After they talk about that briefly they move on to talk about Erika flashing PK at the party. Kyle says “I don’t think Dorit is quite ready to let it go yet.” Lisa V says “I think PK kind of liked it and Dorit is rather annoyed.” Kyle tells her “I think some women are ok with wearing some form fitting dresses without underwear.” Lisa V laughs and says “No thanks. I rather like my knickers.”

Eileen and Erika meet with one of the executive producers to talk about her role on the show. He asks her “What kind of role do you see yourself playing?” Erika isn’t sure. He says “Maybe the girl next door?” Erika laughs and says “No, maybe the hooker next door.” He then asks “Would you two like to play in a scenario together?” Both women seem excited by this. Eileen says “Maybe Erika could be an executive coming after my job.” The ladies leave the meeting very excited.

Dorit is happy because Pheonix is going to have her headband removed and have her head checked to see how her skull is progressing. The Dr tells her “Don’t put it back on her head she is done.” Dorit and PK are so happy to hear this news and that their daughter does not have to have to wear the headband anymore.Lisa is in

Lisa is in Philadelphia preparing for a 24-hour sale on QVC. She is very nervous. She says “I will go on air eight different times. You don’t get to sleep much. I will probably only get to sleep about two or three hours.” She is working to be able to allow Harry to only take jobs that he is passionate about. She says “I want to be able to allow him to only take jobs he is passionate about because for years he worked to support us.”

When she manages to catch a break she calls Harry to check in. He asks her “How are you doing?” She tells him “I am delirious.” He asks her “You are selling sweaters in the middle of summer?” She tells him “I am halfway to my goal.” Lisa then asks “Have you talked to the girls?” Harry tells her that he hasn’t. This worries Lisa a little bit, but she needs to take a nap so she doesn’t really have time to dwell on it.

Kyle is still working on her new TV show. She calls her husband who is in Mexico and fills him in on the progress. She tells him “We will be able to film in Los Angeles.” Mauricio is happy to hear about the progress.

Eileen, Lisa R, and Dorit meet up for a drink and to talk. Dorit tells the ladies about the baby’s band procedure and how she felt now that she has finished with it. Eileen reminds them about Erika’s invitation to the lock in. Dorit tells them about Erika’s wardrobe malfunction. Dorit says “How can you expect someone not to stare? If you’re a lady I would think you would have enough sense to cross your legs.” Lisa asks her “Did you say something in the moment?” Dorit continues to run down Erika’s personality. She says “I’m going to confront her.” Eileen says “People watch Erika’s videos and assume she is a certain type of person and she isn’t that way.”

Kyle is shopping with Dorit. She asks Dorit “Did you get into what happened with Erika with Eileen and Rinna?” Dorit says “Yeah. We did.” Dorit tells Kyle “I am going to tell her the next time we go to a white party you need these.” Kyle laughs.

Everyone meets up for the lock in. Eileen congratulates Erika on her ninth number one single. There is definitely some tension between Dorit and Erika. Dorit brings up the fact that Erika did not have on underwear under her dress. This upsets Erika greatly. Dorit presents Erika with a pair of white panties and tells her “You should put these on under your skirt.” She goes on to tell her “I have talked with the other ladies about it and they agree that it was wrong of you to flash my husband.” Erika is appalled that Dorit has blown this completely out of proportion. She tells her “The more you talk about stuff the worse it gets.” Lisa V arrives as the argument is going on and inquires about what is going on, but before she can be filled in the lock in begins.After the

After the arguement settles down the event begins and the ladies are locked into the rooms. Lisa V is not happy to be on a team with Eileen. The ladies have to use clues to find keys to unlock the doors and free themselves. Lisa R, Erika and Kyle seem to be having an easier time figuring out their clues. Lisa V becomes frustrated but eventually, all six ladies make it out of the escape rooms.

After they finish they sit down to eat together and Kyle talks about Kim’s new granddaughter. This prompts all the ladies to talk briefly about their children. Kyle asks Dorit “Did you like the stuff that you bought yesterday?” Lisa R asks “At your store?” Dorit nods and tells Kyle “I haven’t tried the leather pants yet.” Erika speaks up and says “She bought me underwear.” Lisa V looks shocked when she hears this. As the ladies are sitting around the table Erika says “It’s all good and it doesn’t matter.” Dorit says “You strike me as the type of girl you can have a little fun with and joke with.” Lisa V says “Is this the end of it?” Both ladies say “It is for me.”