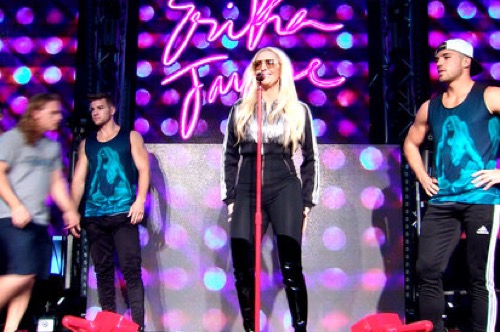 Tonight on Bravo The Real Housewives of Beverly Hills airs with an all new Tuesday May 10, season 6 episode 24 called “Secrets Revealed” and we have your recap below. On tonight’s episode when the Beverly Hills vault is opened, Erika Jayne’s latest sexy video is revealed, as is the hard work that goes into preparing for a big show. Eileen Davidson’s “inner Erika” comes out on a shopping trip, while Lisa Rinna comes clean about using a strap-on.

On the last episode, as the reunion wrapped up, the women relived the fun of Dubai, and also the outrageous interpersonal drama that occurred there. Did you watch the last episode? If you missed it we have a full and detailed recap right here for you.

On tonight’s episode per the Bravo synopsis “when the Beverly Hills vault is opened, Erika Jayne’s latest sexy video is revealed, as is the hard work that goes into preparing for a big show. Eileen’s “inner Erika” comes out on a shopping trip, while Lisa Rinna comes clean about using a strap-on. Kyle is frustrated by a spending spree Portia went on by mistake, and Yolanda’s daughter, supermodel Gigi Hadid, shares a common interest with Erika’s husband, Tom.”

Tonight’s special episode is going to be filled with more crazy housewife drama that you won’t want to miss, so be sure to tune in for our live coverage of the show tonight at 8 PM EST! While you wait for our recap hit the comments and let us know how excited you are about this episode of The Real Housewives of Beverly Hills!

This week on The Real Housewives of Beverly Hills: Secrets Revealed the ladies are reunited to talk about the stuff we didn’t get to see. Kyle talks about the remodel of her house and says “My husband was frustrated that I took a whole bedroom off the house for the remodel. They also talk about Ericka’s chapel. Andy asks her “Do you really use it?” Ericka tells him “Yes, I use it every day.” Next up they talk about Lisa V’s animal kingdom which includes swans, dogs and a miniature horse. Lisa V says “I have a few swans that are really nice. They stand right outside of my door. I also have six swans that are not so nice.” Andy asks Kyle “Are you afraid of Lisa V’s swans?” Kyle laughs and exclaims “Yes, They can be mean!”

They then show footage of Kyle with her daughter Portia. Kyle says “The problem with having a child so much younger than her sibling is that she wants to do a lot of things. I enrolled her in horseback riding classes. The classes include teaching her to take care of the horses including cleaning their horseshoes and brushing the horses.” Kyle also says “I want Portia to be exposed to as many experiences as she can be so that she can choose what she wants to be as long as it makes me happy.”

One of the fans asks Yolanda why she needed chryotherapy. Yolanda says “I discovered the therapy after one of my surgeries. They then show footage of the different things that Yolanda has tried to manage her Lyme disease. These therapeutic measures include seeing a holistic chiropractor. Yolanda says “Dr. K was the one who told me that I had plastic in my liver before I found out that there was silicone leaking in my chest.”

The next clips are of Lisa R taking care of her daughter Amelia after the child had her tonsils removed. Lisa R says “If I have to get one more popsicle I may scream.” She then sits down to talk to her daughter, who seems incredibly upset. Lisa R asks her “Are you done with me?” The little girl looks at her and Lisa says “I know you can’t talk but you can nod your head.” The little girl nods and Lisa leaves her be.

Lisa V takes Ken to the Dr. to get botox treatments. She says “Ken is going to get botox treatments whether he likes it or not.” When they get to the Dr. Lisa tells him “Look in the mirror and see what I have to look at.” Ken says “If she wanted a younger man then what is she doing with me?” When he looks in the mirror he seems startled and says “Oh who is that?” Lisa V laughs and says “Ken is almost seventy. If he doesn’t need botox now then when? Half of L.A gets botox. I had my first treatment at 45. This is only because it wasn’t invented until then. Had it been available earlier I would have done it.” When the Dr. sticks Ken with the needle he jumps and swears. Lisa laughs hysterically.

When they return they talk about Yolanda’s daughter Gigi’s career choices. At first she wanted to be a lawyer and then she became sidetracked with being a supermodel. Yolanda says “I can see Gigi going back to school to study law.” Gigi says “I actually don’t think I would want to practice. The reason that I wanted to go to university was because I liked learning and talking about the law. I don’t think I would want to practice.”

Lisa R says “I can’t believe that I have a 17 year old daughter. Delilah wants to be a model and I want her to achieve her goals. However I told her that I thought she should wait until she was 17 to start.” Lisa R is fussing at Delilah about wearing her retainer. Delilah tells her “I have a built in retainer.”

Kyle is dealing with her daughters. Her youngest daughter Portia is really upset because she spent money on an App and ran up thirty seven pages worth of credit card charges. Portia asks “Do we have to tell Daddy? I don’t want him to be mad at me.” Her older sister comforts her and says “Daddy won’t be mad, but we have to tell him so he can help us figure out how to fix it.” Kyle then tells her girls about running up the phone bill calling a 900 number to talk to a psychic. and Portia’s other sister tells her about the time she was 8 years old and crashed the golf cart. Kyle says “My husband rarely gets mad and we have never spanked our kids. We gave them time outs when they were toddlers. Now it is all about talking about the mistake.”

Andy asks the women what it was like seeing Ericka perform. Eileen says “It was great and fun to see her alter ego.” Ericka goes to visit Eileen on the set of The Young and the Restless. Eileen says “I like having people visit me on the set when it is not a hard day. If it is a hard day I don’t because I have to focus.” Ericka is having a blast watching Eileen on set. Eileen invites her to come back. She also tells her “Maybe I can get you a part on the show.” Ericka laughs and says “Maybe a crazy stripper on a pole.” Eileen responds “We’ll get you a part as a nun.”

Kyle goes to visit Kim in Palm springs. They reminisce about their childhood memories. Kyle says “I want my sister and I have to have a positive relationship and for us to be close.” Kim says “We have fun together and I want us to be able to continue to do that.” The two then get together to take a selfie by the pool as the sun goes down.

Andy asks Lisa R about her comments on Jenny Mcarthy. Lisa R tells them that Harry was shocked. They went on to address Eileen’s alter ego. Eileen and Ericka go shopping together. They meet up with Lisa R. Eileen asks Ericka how she deals with Tom being gone. Ericka tells her “At first I went with him everywhere. Now I only go to the fun stuff.” The women go shopping and Eileen tries on some pretty racy outfits and the ladies are impressed.

Katheryn is asked about her workout habits. She says “Honestly I don’t do as much as people think I do. I think it is mostly due to genetics.” Lisa R says “You lift a lot don’t you?” Katheryn says “Yes I do.” Andy asks “Could Katheryn take all of the ladies in an arm wrestling contest?” All of the ladies unanimously say “Yes!”