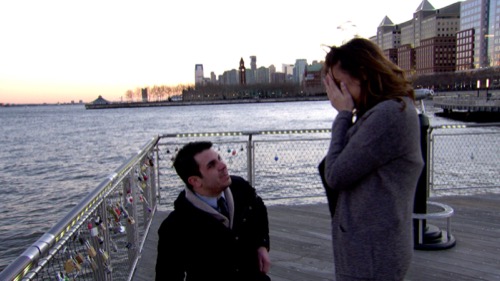 On Bravo TV Tonight The Real Housewives Of New Jersey (RHONJ) airs with an all new Sunday, September 18, 2016, episode, and we have your RHONJ recap down below!  On tonight’s RHONJ Season 7 episode 10 called, “Cut the Cancer Out,” Dolores Catania focuses on her gym business, and Melissa Gorgan suggests a group getaway to Vermont.

If you missed last week’s episode where Teresa Giudice had a book signing where a few unexpected visitors showed up & so much more.  Head over to our Real Housewives of New Jersey (RHONJ) recap, Right HERE!

On tonight’s RHONJ episode as per the Bravo synopsis, “Emotions are running high in Jersey as Jacqueline Laurita chokes up over a special proposal and Teresa Giudice’s blood boils in a tense family reunion with her cousins, Kathy and Rosie. Meanwhile, Dolores Catania gets serious about her gym business with an extra push from her friends. Also, Melissa Gorga suggests a group trip to Vermont to give Teresa one last vacation before her husband goes to prison.”

On this week’s episode of The Real Housewives of New Jersey Siggy meets up with Rosie and Kathy. She tells them “My son got his driver’s license and I’m  supposed to be happy about it.” She then asks them “How was last night?”  Rosie tells her “It was good. I invited her to lunch.” Siggy tells her “That’s good. The only way to mend this rift is to do what you did.”  Rosie tells her “I am so tired of being slapped down.” Siggy tells her “Make sure that this lunch happens.”

Melissa and Joe are talking. Melissa tells him “Rosie and Kathy feel as though they aren’t being invited to anything that Teresa has going on.” Joe tells her “Teresa is done with Rosie and Kathy. She feels really betrayed by them.”

Jacqueline’s daughter Ashlee and her boyfriend Pete are going out apartment hunting. Dolores couldn’t be happier for them. She tells her “I want to hear all about it. I want to live vicariously through you.” Ashlee laughs and tells her mother “You and Dad go out more than I do.” When the couple gets to one of the apartments in Mt. Clair Pete gets down on one knee and proposes to Ashley. She is so excited and overwhelmed that she starts to cry. She tells him “Of course I will.” The couple hugs and Pete shouts out “She said yes!” Ashlee asks him “Are we really looking at apartments?” Pete laughs and asks her “Do you still want to go to dinner?” Ashlee says “No. I want to go home and tell my mother.”

Ashlee and Pete arrive back at the house and tell Jacqueline the news of their engagement. She is ecstatic. She asks Ashlee “Can I tell everybody yet?” Ashlee tells her “No we haven’t told anyone yet.” Her dad walks in and they tell him. Then they open up a bottle of champagne and toast the happy couple.

The next day Jacqueline calls Melissa and tells her about Ashlee and Pete’s engagement. Melissa and Teresa meet up to talk about the situation with Joe getting ready to head off to jail. Teresa says “He hasn’t been talking about it. He just tells everyone I’m good. I’m good. He’s also drinking a lot.”  Melissa says “Teresa has to be strong. My in-laws were raised to made of tough stuff and handle their business. My husband is the same way.” She tells Teresa “Maybe he’ll come out with that six pack you  always wanted him to have.”

Jacqueline and Melissa meet up to talk and they talk about how worried they are about Teresa. Melissa comes up with the great idea to go to Vermont for the weekend so that Teresa can get away for a girls weekend to just relax. Delores asks “Why Vermont? Can’t we go somewhere warm?”  Melissa says “I don’t think she can go that far from home so we have to stay close to home so we have to do something close.” When Teresa arrives they propose the idea to her and after a bit of convincing they finally manage to get a commitment to go out of her.

The ladies meet up to have lunch. Jacqueline tells Teresa “I had lunch with Kathy and Rosie. They are really hurt and they want to have lunch and try to make peace with you.” Teresa gets really upset. She tells Jacqueline “Stay out of my family business.” Jacqueline tells her “They just want to have lunch and try to make things better. “ Teresa tells her “They should have thought of that before they brought my parents into this. I have to worry about myself, my husband, my four children, and my parents.” Siggy tells her “Just think about having the lunch with them.” Teresa says “I’ll think about it.” Then she leaves them to have lunch.

Siggy goes to visit Kathy, Melissa and Rosie. When Siggy tells them the result of the lunch Kathy and Rosie immediately get angry. Kathy says “Your tongue doesn’t have bones but it can break bones.” Rosie speaks up and says “At the end of the day all of the mess falls on my sister. At least fight me. I’ll fight you back.” Joe Gorga says “I’m going home. I’ll call my sister and I will try to work it out because she should have respect for Rosie and Kathy and try to work it out.”

When Joe gets home he goes and talks to Teresa. He tells her “They think you are using daddy as an excuse.” Teresa tells him “I just don’t want to be around them. I don’t want to be around Richie. He has so much negative energy.” Joe tells her “He pissed me off last night. He insinuated that you were jealous because he loved his wife by grabbing Kathy and kissing her. If you sit down with the two of them I’ll go with you.” Teresa looks astounded. She says “Really? The only way I’ll go is if you go is if you go with me.”

Teresa tells them “I just don’t want to deal with the turmoil anymore. I want to cut the cancer out.” Rosie and Kathy appear very hurt by this. Rosie says “We’re not Cancer. Are you telling us that you don’t ever want to laugh, hang out and hug and be a family again?” Teresa tells them “The answer is no.” Rosie tells her “I’m not going to beg.” Teresa says “The door is always open if you need anything. We will always be family.” Teresa cries as they leave the restaurant. Joe tells her “Don’t cry.” Teresa says “It’s just too much.”