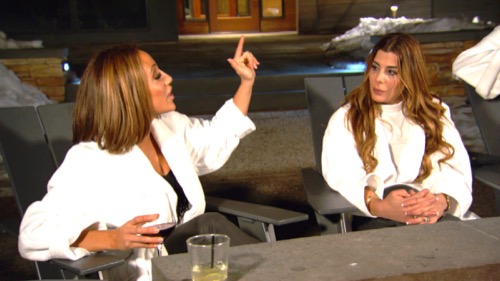 On Bravo TV tonight The Real Housewives Of New Jersey (RHONJ) airs with an all new Sunday, September 25, 2016, episode, and we have your RHONJ recap down below!  On tonight’s RHONJ Season 7 episode 11 called, “Rage on My Ass,”  the group heads to Vermont to a white mountaintop resort, but the trip has a rocky start when Jacqueline  Laurita clashes with Teresa Giudice’s pal, Robyn Levy.

Did you miss last week’s episode where emotions were running high in Jersey as Jacqueline Laurita choked up over a special proposal and Teresa Giudice’s blood boiled in a tense family reunion?  If you missed it head over to our The Real Housewives of New Jersey (RHONJ) recap of last week, Right HERE!

On tonight’s RHONJ episode as per the Bravo synopsis, “The group is off to a white mountaintop resort in Vermont to give Teresa Giudice one last trip before Joe Giudice goes to prison and she enters single parenthood. The trip gets off to a rocky start as Jacqueline Laurita and Teresa’s friend, Robyn Levy, get into a scuffle in the van on the way there. Melissa Gorga sees a new side to Jacqueline, while Dolores Catania and Siggy Flicker struggle to keep the peace. Later by the bonfire, Jacqueline and Robyn lose control of their tempers and a simple s’mores moment turns into a fiery argument.”

On this week’s episode of The Real Housewives of New Jersey, Jacqueline goes over to Delorese’s house to talk to her and siggy. She asks them “I wonder what happened?” The other two ladies are wondering the same thing, so Jacqueline calls Rosie. She merges the call with Kathy and they tell them “We basically wanted her to know that the door was open and she told us the same thing.”

The ladies feel bad that it did not go well, but they are preparing for the trip to Vermont. After the meeting with her cousins, Teresa goes home to pack for her trip. Her daughters ask her “Mommy where are you going?” She tells them “Vermont.” They ask “When are you leaving?” She tells them “After you leave for school. You won’t even know I’m gone. You’ll have fun with daddy. Melissa and Joe are getting ready for the trip as well.

Joe tells her “It’s nice that you are doing this trip for Teresa. She had lunch with Rosie and Kathy and she was crying afterward.” Melissa tells him “Jacqueline and Teresa are back to being besties, but I don’t know if they are all the way back. I feel like ever since Teresa and I have gotten closer she has been kind of distant.”

The ladies go out to do some shopping. While they are out shopping, Siggy reveals that a former employee of Melissa’s at Envy told her that Teresa had been selling her books in South Africa while she was on a book signing tour. Siggy begins to question Melissa’s sincerity in her relationship with Teresa. She says, “If I were her I would really start to wonder if this were someone that I would want in my life every day.”

Teresa tells Joe that she is going to have Vaginal Rejuvenation while he is away. The ladies show up to pick her up and Siggy asks Joe “So what are you going to do while we are away?” Teresa says, “He has kids to take care of.” After saying goodbye everyone boards the bus.

Once they board the bus, everyone is having a great time until the subject of Kathy and Rosie comes up. Teresa says, “They’re never gonna call me, I’m never gonna call them so whatever.” Siggy tells her “I met Rosie and she seems to one of the most genuine people I have ever met.” Jacqueline is watching the conversation and she says to Melissa, “Why are you letting them attack her?” Melissa immediately becomes defensive and a fight ensues between the two women.

Joe says, “What you were saying to them is my door is always open but that I am done with it.” Even Delores steps in and says, “You were basically telling them that you needed space.” Finally, the argument ends and they arrive in Vermont.

That night at dinner, Teresa thanks everyone for supporting her while Joe is preparing to go away. After dinner, Siggy sits down and talks to the rest of the women about the situation with the young man selling the footage of the incident at Teresa’s book signing. Melissa says, “I can’t fire someone for having evidence of something that actually happened.” Delores says, “I was at a book signing and someone asked me if I thought it was Derek. I told them I didn’t know.” Jacqueline asks Robin “What do you think of me?” Robin tells her “You confuse me.” Jacqueline asks her “Really? Why?” Before she can answer Delores tries to step in, but Jacqueline stops her and says “No, I want to hear the answer.”

Meanwhile, Joe Gorga and Jacqueline’s husband are sitting out on the deck when Teresa walks out. He tells her “They are going at it.” Teresa looks surprised and says, “Really?” Jacqueline and Robin are screaming at each other and the ladies have to step in to seperate them. Teresa tells them “All right ladies we need to go to sleep and sort this out tomorrow.” Jacqueline yells out “I thought you said you cleaned house, but you forgot to take out the trash.”

When the ladies wake up the next day they are all fractured after the events of the night before. Everyone is preparing to go dogsledding, but Jacqueline refuses to come out of her room. Everyone is wondering why she is acting this way.

Teresa continues to try and reach out to her and she doesn’t respond, but the women forget about it when they get to the dog sled place. They are impressed by the dogs and excited to take a ride on the sled. The ladies head out on the sleds in teams of three and have a fabulous time. Teresa is having a fabulous time. After the ride they finally receive a message from Jacqueline letting them know that she is ok.

The group decides to separate and some of them go skiing while others go back to the hotel. Melissa and Teresa are discussing the issues with Jacqueline out on the slopes. Melissa says “You need to help me understand her. If I am going to have a close relationship with you I may have to distance myself from her.”

When Delores comes back, she comes upstairs to talk to Jacqueline. Siggy also comes in. She tells her, “First of all you are not leaving. If you leave we are all leaving. I feel liike I need to protect Teresa from people like Robin because she could be trouble.” Jacqueline agrees. Siggy says, “I am going to talk to Melissa because they should leave. We are the group that has been together the longest and these other two women are looking to start trouble. I am going to tell Melissa that they should leave.”