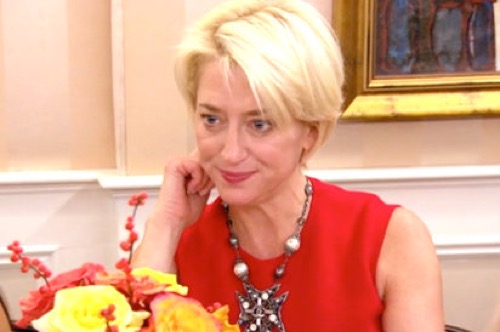 The Real Housewives of New York returns to Bravo tonight with all new Wednesday May 4, season 8 episode 5 called, “Birthday Bashing,” and we have your weekly recap below. On tonight’s episode, Jules Wainstein airs her grievances to Dorinda Medley and Carole Radziwill concerning Bethenny Frankel’s abrasiveness during the Hamptons trip. Bethenny gains a newfound respect for Jules when Jules opens up about a personal struggle.

On the last episode, the ladies continued their fun weekend in the Hamptons, and Dorinda prepped John to apologize to Bethenny for crashing the lingerie party and insulting her.  Did you watch the last episode? If you missed it, we have a full and detailed recap right here for you.

On tonight’s episode as per the Bravo synopsis, “Jules airs her grievances to Dorinda and Carole concerning Bethenny’s abrasiveness during the Hamptons trip. Bethenny gains a newfound respect for Jules when Jules opens up about a personal struggle.

Meanwhile, Ramona finally tells Sonja why she has avoided spending time with her. Then, Ramona hosts an eventful birthday lunch where Luann makes a regifting faux pas, Bethenny confronts Luann about her behavior over the summer, and Dorinda delivers a double-edged toast.”

This week on The Real Housewives of New York City Bethenny and her personal assistant Julia are packing for her daughter Brynn. Bethanny says “Brynn is like a little me.” She also says “Brynn loves her mommy, but she is also independant and into being really girly.”

Dorinda meets with Carole. She asks Dorinda “Can we be catty for a second?” Dorinda says “Sure.” Carole comments on the state of Jules house and the fact that there was construction, but no lumber laying around. Carole mentions that the brunch was tense and says “Maybe it was due to the fact that John and Bethenny were at odds. Dorinda is quick to defend John saying “We are not going to blame John for everything bad that happens.” Jules joins them for lunch and immediately starts in on Bethenny. She says “She says we can’t stay long because we have a lunch. Who schedules a lunch when they know they are going to brunch?” Jules goes on to say “If you don’t like someone’s house then keep the criticism to yourself. Last weekend was my first time in her house and it is smaller than my New York apartment, but I didn’t walk in and say what is this a place for ants?” Carole is quick to defend Bethenny. She tells Jules “You just don’t understand Bethenny. She isn’t really a mean person, she is just very direct.” Jules tells her “It doesn’t matter. You should never be that rude in someone else’s home.” Jules says “Bethenny is just not my cup of tea.” Dorinda says “Bethenny is really a good person if you are willing to peel back the layers and get to know her.” Dorinda also defettnds Bethenny. Jules tells them “I am meeting with her on Thursday.” Carole tells her “Good tell her how you feel.”

Ramona comes to visit Sonja at her office. She shares the news that her divorce is final and Sonja asks her how she feels. Ramona responds “I am happy. I know that I tried my hardest and that it doesn’t work.” Sonja tells her that she had to go visit her daughter and that was why she wasn’t at Bethenny’s party. Ramona tells her “You weren’t invited.” Sonja seems shocked and asks Ramona “Why?” Ramona tells her “Your drinking is out of control and people are asking about my association with you.” Sonja seems offended by the fact that Ranona brought this up. She says “I don’t need to have Ramona telling me how Bethenny feels about something I did. If Bethenny has a problem with me then she can tell me herself.”

The argument between the two women gets more intense and Sonja tells Ramona “I don’t know how you can talk about my behavior when I have spent the last thirty years apologizing for yours.” Ramona backs off and tells her “I am only telling you this because I love you.” Sonja then tells her LeeAnne will be moving in with her for a little while. This news sparks Ramona’a concern. She tells Sonja “Send me a picture of all of her bags and I will tell you how long she is going to stay.”

Jules opens up to Bethenny and tells her “I had an eating disorder when I was in my late teens and early twenties.” Bethenny tells her “I respect the fact that you brought that up because I have alot of experience with that.” Jules says “I didn’t expect to say so much and the fact that she was so open makes me really like her.”

Ramona and Bethenny are at Ramona’s and Carole shows up. Bethenny says “Carole moves at a different speed.”

Dorinda and Jules meet up and discuss Jules’ lunch with Bethenny. Dorinda asks her “How was it?” Jules says “You were right”

Bethenny tells the girls “Jules opened up and talked to me about the brunch, and I realized that what she wanted to tell me was she thought I was rude and that the brunch was really uncomfortable.” Ramona asks Bethenny if she was going to be ok with LouAnne being at her birthday party. Bethenny says “LouAnne is a grasping person and when she doesn’t need you she doesn’t need you.”

Dorinda tells Jules “I am mourning. Even though we sort of patched things up in the Hamptons things are still not right with Ramona. When you have only a couple people you can trust and one of them betrays you it leaves a gaping hole there.”

Everyone is at Ramona’s birthday except her when Bethenny arrives. Bethenny says “All of these women came to the party last year and never left. They stuck themselves in the freezer and came out today. When Ramona does arrive she says “I am happy to celebrate my birthday with 50 of my closest friends who were there for me through my horrible divorce.” Ramona tells them “I got a text from Sonja asking me if my birthday lunch started at three. I told her no it starts at 12 and would be over by 2.” When LeeAnn arrives the air in the room definitely changes. Carole practically ignores her and LouAnn goes over and acknowledges her. She tells her “That was the cold shoulder.” Carole just pats her shoulder and walks away.

Jules really likes LeeAnn despite the things she has heard about her. LeeAnn tries to make things up to Bethenny by giving her a designer bag that she had seen her admire. Ramona is really upset when she sees this. She says “LouAnn’s gift to me was something she had given me last year that I had to have fixed.” Bethenny decides to confront LeeAnn about her aggressive behavior when it comes to party invitations. The two women begin to verbally spar and Bethenny tells her “You need to just stop being so aggressive.” LeeAnn begins to cry and Bethenny says “I have rarely seen LouAnn cry. so she must be feeling bad about things.”

One of the ladies at the party asks if John is trying to tie Dorinda down. Dorinda tells then ” They are giving John a hard time.” She says “I don’t understand why they are giving him a hard time. I love him. I have chosen him and if you are my friends you should accept that.” Dorinda stands up and offers a toast at the birthday lunch. In the toast she talks about friendship and loyalty. She says “That was a message to Ramona. Whether or not she gets it remains to be seen.”