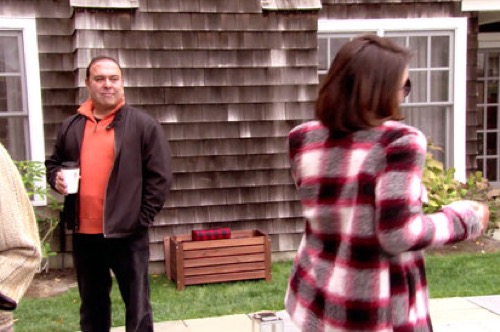 The Real Housewives of New York returns to Bravo tonight with all new Wednesday April 27, season 8 episode 4 called, “BBQ, Brunch or Bust,” and we have your weekly recap below. On tonight’s episode, The ladies continue their fun weekend in the Hamptons, and Dorinda Medley preps John to apologize to Bethenny Frankel for crashing the lingerie party and insulting her.

On the last episode, Chaos from the lingerie party continues as Dorinda confronted Ramona, shocking Jules, the newcomer to the group. The night heated up when John arrived at the party uninvited, ready for a showdown with Bethenny. Did you watch the last episode? If you missed it, we have a full and detailed recap right here for you.

On tonight’s episode as per the Bravo synopsis, “the ladies continue their fun weekend in the Hamptons, and Dorinda preps John to apologize to Bethenny for crashing the lingerie party and insulting her. The ladies begin to arrive at Bethenny’s house ready to party, but wanting to bask in birthday behavior, Bethenny avoids John and his attempts to apologize, making everyone uncomfortable. Although Carole doesn’t want to engage Luann, Luann pursues her until she relents, and they decide to hash out their issues. When Bethenny finally decides to hear John out, it escalates into another confrontation, but seeing Dorinda upset, Bethenny decides to extend an olive branch to him. The next day, Jules decides to hosts a brunch, but when Bethenny gives her unwanted opinion on the state of Jules and Michael’s unfinished home, she confirms Jules’s unfavorable impression of her.”

This week on The Real Housewives of New York Bethenny is getting her house in the Hamptons ready for her birthday party. She says “Here in the Hamptons I feel so blessed and happy. Everyone can come over to my house.”

Dorinda, John, Jules and Michael are getting ready to go to the Hamptons. Dorinda confronts John and tells him “If you love me you will make this right and apologize.” John gets upset and tells them “It was always about me and not about you.” John asks “How was it about you?” Dorinda tells him “It was my lingerie party and you showed up when you weren’t invited.” Jules says “I am nervous because John seems to proud to apologize.”

Bethenny and Carole are talking about the situation between Dorinda, Bethenny and Ramona. Bethenny says “I am over the whole situation although I do think that Dorinda should have apologized for what John did. Instead she came in and was immediately defensive..” Carole agrees and wonders “Who allows their boyfriend to talk to their friend that way?” The two ladies move on to the subject of LeeAnn and her issues with Carole. Carole says “I intend to keep a friendly distance from LeeAnn and avoid any conflict.

Everyone has arrived for the party and are having a good time. Dorinda says “I think John needs to follow the rules no matter what. I think he needs to humble himself and say I’m sorry and not do a whole lot of other verbage period.” Before they enter the party Dorinda says “As ackward as I feel about being here I do agree with the statement that he shouldn’t have been at the party and he definitely should not have said what he said.

When they enter the party Bethenny greets everyone except John. Bethenny says “I really don’t get the sense that John and Dorinda understand what happened because if they did then John would never have shown up here. Maybe I should have been honest and told Dorinda that I wasn’t comfortable with John being here and she wouldn’t have brought him.”

When LouAnn arrives the tension is turned up because of the situation between her and Carole. Carole says “LouAnn always has to be the center of attention.” LouAnn starts Hula Hooping and Carole says “Please LouAnn act like a grown woman and leave the Hula Hoop at home.”

Dorinda reminds John that he has to apologize to Bethenny. LouAnn goes over to sit with John, Dorinda and Jules when she sees Carole sitting at the table with Bethenny. She says “It is like the mean girls table in high school.” Meanwhile Bethenny is still upset and she feels uncomfortable at her own party. She says “John is lurking in the background like Dracula ready to pounce.” Once again Dorinda tells John he needs to go apologize to Bethenny. When he tries Bethenny moves away and goes into the house to get away from him.

Ramona decides to leave the party early for a date. She says “Bethenny I love you, but this is the weirdest party I have ever been to. Everyone is off in their own little groups.” John continues to try to talk to Bethenny and every time he does Bethenny walks away. Dorinda says “If you’re not going to be nice to the people you invite to your home then don’t invite them.”

LouAnn tells Carole “You can’t avoid me forever.” Carole laughs and walks away. Meanwhile the cat and mouse game between John and Bethenny continues. Everyone is sitting around the fire pit roasting marshmallows and the confrontation between Carole and LouAnn finally explodes. Carole tells her “We didn’t say a lot of hurtful things to each other, you said a lot of hurtful things to me.” LouAnn gets angry and says “I don’t want to talk about this anymore.” However the argument continues until finally LouAnn says “We agree that we won’t be friends.” Carole says “Here is the one thing that LouAnn didn’t say to me today is I’m sorry and if she were truly sorry for the things she said she would’ve apologized.”

John wanders over and Bethenny finally decides to talk to him but tells him that he has five minutes and they need to move away because she doesn’t want to talk in front of other people. They head outside and John tells her “I appreciate you talking to me and I waited until we could do this in private.” John is immediately on the defensive. John tells her “You are not a nice person and you said things to upset my girlfriend.” The argument gets more intense. John tells her “I am in a relationship with someone that I love and I protect those people that I love, so here it is one last time I apologize for what I said to hurt you and happy birthday.” When Bethenny comes back to the table she is really upset and tells them “The apology means nothing because he doesn’t even know what he is apologizing for.” Jules says “Bethenny is being really cold hearted and mean and not considering Dorinda’s feelings.” Dorinda breaks down and starts to cry. Bethenny says “I need to put a button on this for Dorinda because I really do like her.”

Bethenny approaches John and tells him “We can be straight for Dorinda’s sake because she is the one being hurt most by this. She is like a kid in the middle of a divorce.” John says “That’s fine I can accept that and leave on that note. Happy Birthday once again.” After that everyone begins to leave the party and Bethenny says “This is the best birthday ever. I didn’t verbally assault anyone, I’m not getting divorced so I am happy.”

The next day Jules is preparing for her luncheon. John and Dorinda show up and John asks “Who’s coming?” Jules tells him “Bethenny, Dorinda, Carole and LouAnn.” John asks “Did LouAnn and Carole talk yesterday?” Jules says “I’m not sure but it is really ackward because they used to be close.”

When Bethenny and Carole get there John opens the door and Bethenny says “You knew I was coming and having John open the door is just to much. Give me a minute to dip my toe in before I have to deal with him.” As they move through the house Bethenny is judging the house and the fact that they are still working on it. Jules gets frustrated and says “Shut up. Who are you to judge my house and if Michael wants to build a twenty foot roller coaster in the house then that’s our choice.”

Everyone sits down to lunch and the food is spread out on the table. John says “I’m allergic to bees and I didn’t bring my epi pen because I didn’t think it was necessary.” Bethenny comments “Do you think anyone would mind if I covered John with honey?”

Lunch is tense and that tension is only increased tenfold when LouAnn and her date arrive. Carole says “It is unusual for LouAnn to show up to brunch with a date since her dates rarely stay past breakfast.” Carole is really uncomfortable and wants to leave the party as soon as LouAnn arrives. They decide to leave as the other guests are getting ready to take a tour of the house.

Bethanny and Carole can’t get away fast enough. Meanwhile back at the party Jules is talking to Dorinda and she tells her “I noticed them making faces when they walked in and that caused me to put walls up.” Dorinda says “I feel bad for Jules because she is a natural cheerleader and she worked hard to put this brunch together. I think Bethenny is judgemental and Carole follows whatever Bethenny does.”