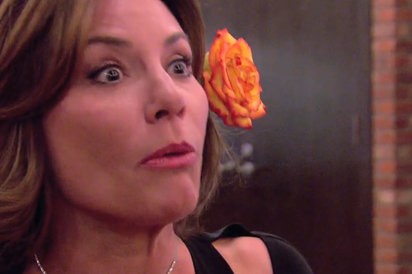 On the last episode, Bethenny shared a damaging secret about Luann’s relationship with some of the ladies. Did you watch the last episode? If you missed it, we have a full and detailed The Real Housewives of New York recap right here for you.

On tonight’s episode as per the Bravo synopsis, “it’s the last morning in Miami and Luann is left devastated after Bethenny reveals the incriminating news about Tom. Back in New York, Luann checks into a hotel to figure out what to do about her situation. A few days later, Dorinda tells Ramona that she got a threatening call from Tom. Bethenny throws a Mexican-themed party for the girls with a piñata filled with 10K worth of jewelry.”

This season of Real Housewives of New York City has been filled with breakups, make ups, fights and friendship tests. Some of the friendships and relationships have stood the test of time while others crumbled and fell apart. The season finale promises to be explosive. This week on the season finale of The Real Housewives of New York City LuAnn goes to her room and Dorinda goes to check on her. Dorinda asks her “What happened?” LuAnn tells her “Bethenny has pictures of Tom.” LuAnn goes back over to Bethenny’s room and asks her “How bad is it?” Bethenny tells her “It’s pretty bad.” LuAnn asks her to see the pictures and when Bethenny shows her LuAnn becomes overwhelmed. She flees the room overwhelmed. Jules and Dorinda are there to comfort her. Dorinda says “I don’t know why she would choose this moment to tell you.” Dorinda tries to reassure LuAnn. She tells her “How do we know when these pictures were taken? Four months ago he was in bed with Sonja. The pictures weren’t time stamped.” LuAnn says “I don’t know when the pictures were taken.”

Meanwhile, Bethenny is freaking out. Ramona and Sonja go to the room and comfort her. Bethenny tells them “I did not want to tell her this. I feel awful. She is so hurt.” Ramona tells her “This is not your fault. It is better coming from a friend than from the press.” As they are talking LuAnn knocks on the door. Bethenny asks Sonja and Ramona to leave. She tells them “This is not a sorority thing.” The two women leave the room as LuAnn enters and LuAnn says to Bethenny “I was with Tom at the Regency on Wednesday so there is no way that this picture could have been taken last week.” Bethenny tells her “I had it confirmed with the manager at the Regency. I bluffed like I had been there and he confirmed that I had been there making out with a bald man at the front of the bar.”

LuAnn is absolutely devastated. She says “Bethenny I know that in the deepest part of my heart that this man loves me.” Bethenny then reveals that she revealed the information to Ramona and Carole and that Ramona had told Sonja. Meanwhile, the ladies are speculating about what LuAnn is going to do. Sonja says “Maybe she’ll want to move back in with me.”

Meanwhile back in Bethenny’s room Bethenny and LuAnn are talking when Tom calls LuAnn. LuAnn confronts Tom very angrily. He tells her “It will never happen again.” LuAnn tells him “How do I know that it will never happen again?” After the conversation with Tom LuAnn asks the girls “Can we please not talk about this anymore? I need to deal with this with Tom because I love him and he loves me.” Dorinda tells LuAnn “I didn’t know that Tom was a player.” LuAnn turns on her and tells her “You introduced us.” Dorinda tells her “Tom needs to make this right because we are too old for the excuse of I don’t remember.”

LuAnn is just ranting and raving. Jules asks “What is she going to do?” Dorinda says “She is all in.” Bethenny tells LuAnn “You need to be careful because you are a very rich woman.” LuAnn tells her “He has his own money.” Bethenny says “He doesn’t have as much as you.” After a few more minutes of discussion, LuAnn says “I think I am going to go pack and busy myself.” Carole says “I think she is in shock.” Bethenny says “Of course she is because she now knows that Tom is not the good guy she thought he was”

When the ladies get back to New York LuAnn decides to check into a hotel rather than go back to Tom’s apartment. She calls Jules and tells her “I don’t know what to do. Everyone makes mistakes.”

Ramona goes to visit Dorinda who is sick. Dorinda tells Ramona “I got a call from LuAnn and she is at the Regency and she hands the phone over to Tom.” Ramona looks shocked to hear this. Dorinda goes on to tell her “Tom tells me that he is bringing two waiters to my house to explain things and then I am supposed to take a bullet for LuAnn with the girls. I told him I was not going to do that and he told me that if I wouldn’t do that then i wasn’t invited to the wedding and that I couldn’t be friends with LuAnn anymore.”

Bethenny and Carole are also talking about this and they agree that LuAnn is wrong for trying to cover up Tom’s lies. Carole says “It’s true that LuAnn just wants to be married and she’ll just make excuses.”

The night of Bethenny’s Mexican themed party arrives and she is worried about the fallout from Miami. LuAnn calls Jules and tells her “I don’t really want to go to this party.” Jules tells her “if you don’t go it will just give everyone more reason to talk.” LuAnn arrives with Jules and Michael. Sonja arrives with Rocco. She and LuAnn manage to have a somewhat civil exchange. Dorinda and John arrive. Dorinda says “Bethenny and John have come to some sort of truce and although we won’t all be having dinner anytime soon she was ok with me bringing him to this party.”

Meanwhile, Bethenny is trying to gather everyone together to get ready to take their whacks at the jewelry filled pinata. Dorinda tells her “You don’t need any more jewelry.” All of s sudden LuAnn approaches Bethenny and tells her “If you don’t stop talking about me I’m  leaving.” All of the ladies look stunned. Bethenny tells her “No one was talking about you. We were talking about the pinata that is filled with 10,000 worth of jewelry.”

LuAnn moves away and Dorinda goes over and asks her “How are you doing?” LuAnn says “I am doing good.” Dorinda asks her “What are you doing this weekend?” LuAnn tells her “I don’t know. Things are up in the air. “

Bethenny and Jules have an intense confrontation where Bethenny tells her “I didn’t want to do this here, but you really hurt my feelings.” Jules tells her “Well Dorinda really pumped me up and told me that you were making fun of my recovery.” Bethenny asks her “What did I say?” Jules tells her “I don’t really remember what you said. Bethenny says “Well you better remember something.”  Bethenny goes and confronts Dorinda. She tells Dorinda “ I never said that Jules was a bad person or that her recovery was fake.” Dorinda says “Yes you did. You said you couldn’t be around her.” Bethenny says “That’s my opinion and how I felt.” She tells Jules “I invited you here tonight and  i hope you are happy and healthy.”

Some friendships ended and for these New York women life just keeps getting better!