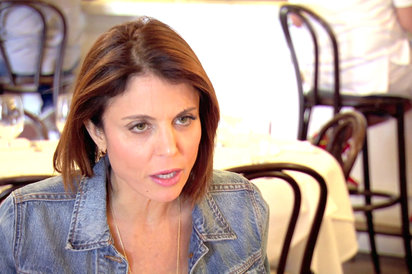 On the last episode, with Luann’s engagement party fully underway, the ladies celebrated in style with mixed emotions and mixed cocktails. Did you watch the last episode? If you missed it, we have a full and detailed The Real Housewives of New York recap right here for you.

On tonight’s episode as per the Bravo synopsis, “Bethenny shares a damaging secret about Luann’s relationship with some of the ladies. Out on the town Luann continues to gloat about her engagement, while Bethenny and Sonja do some undercover work and make a confrontational phone call.

Once again Dorinda’s plans for the group don’t work out as the ladies split up for the day, causing frustrations to surface at dinner. The final morning in Miami opens the door for an upsetting conversation that leaves Bethenny no choice but to share this scandalous secret to the person it could hurt the most.”

On this week’s episode of Real Housewives of New York City Bethenny reveals the news to Carole and Ramona that Tom is being unfaithful to LuAnn already. Both Carole and Ramona are shocked and appalled. They ask if she is going to tell LuAnn. Bethenny says “I don’t know. I don’t want to ruin this weekend.”

Ramona is talking to LuAnn and she asks her about her conversation with LuAnn. LuAnn tells her “It was good. She just asked me if I was sure and about how well we knew each other. We’re good now.” Ramona says “I am not going to tell her. I know that Bethenny is going to tell her at some point so I am going to leave it up to her.”

Later that night at dinner Bethenny confronts Ramona about telling Sonja about the information that she has on Tom. She tells Ramona “I tell you not to tell anybody and you go and tell Chrissy from Three’s company.” The three ladies sit down and discuss the situation. Sonja says “I was just with him at Thanksgiving and then he turns around and gets engaged to LuAnn.”

As they are sitting there waiting for Jules, Dorinda and Carole to show up Bethenny says “This is ridiculous. They are now two hours late for dinner. If they don’t show up in here looking fabulous then they need to walk out.” Sonja says “Then they need to be prepared to just walk out.” All three ladies laugh.

When Dorinda, LuAnn, Jules and Carole finally show up Bethenny tells them “It was really unacceptable for you guys to be an hour late meeting us here.” Jules says “Who talks to someone like that? Screaming at them across the dinner table?” One of the ladies asks LuAnn what Tom is doing and she says “I don’t know and I don’t’ care. I’m not jealous.”

When they finish dinner Dorinda has set up a trip to the Saind Bar. Ramona decides that she doesn’t want to go. Eventually they all decide to go, except for Bethenny and Sonja who go back to the hotel. When they get back to the room they are discussing the situation.

Bethenny says “There was a tiny know it all part of me that was glad. I feel sorry for LuAnn, but I have to tell her.” Sonja tells her “You go to him. Maybe he will say he is sorry and that he made a mistake.” Bethenny says “Do you have his phone number? Give me his phone number.” Bethenny tries to call Tom, but he doesn’t answer. She says “He is probably out banging someone else.”
Meanwhile the other ladies are out having a fabulous time at Sand Bar. Dorinda comments “I wish John was here.” LuAnn says “I wish Tom was here.” Jules laughs and says “I’m glad Micheal is not here.”

Bethenny reaches Tom’s voicemail and decides to tell LuAnn tomorrow. The next day Carole comes in and tells Sonja and Bethenny “LuAnn says that you and Tom weren’t together for ten years. He says it was just one night.” Sonja gets really upset. She says “First she says Ramona didn’t have five dates with him and now I was just a one night stand? This is just ridiculous.”

The next day the group decides to split up. LuAnn, Carole, Dorinda, and Jules decided to go on a cruise to the sand bar while Bethenny, Ramona, and Sonja decided to stay close to the hotel and go to Bagetelle. While they were having lunch Sonja finally opened up and talked about her feelings about the situation between her and Tom.

She tells Bethenny and Ramona “I have tried to keep quiet because I am happy for LuAnn, but I am hurt. Tom and I were together just before Thanksgiving and then I turn around and he was engaged to LuAnn. I feel really hurt.”

Meanwhile out on the boat the four ladies are having a wonderful time. LuAnn tells them “You won’t believe what Bethenny said to me. She criticized my relationship with my husband Alex saying that he cheated on me and then she asked me if Tom and I were faithful to each other.”

Carole tells her “I’m sure that Bethenny didn’t mean any harm. She got married quickly and understands what can happen. She was just looking out for you.” LuAnn says “I don’t want an open relationship. ” Carole says “I thought you said you had one.” LuAnn says “I did, but not by choice. I want a relationship like I have with Tom.”

Later that night everyone is getting ready for dinner. Jules asks Dorinda “Are you excited for dinner?” Dorinda says “Not really. Ramona is like a dog with a vicious bite. I’ll pat her on the butt, but I am staying away from her face. When everyone heads down to dinner Bethenny has invited her artist friend in order to keep from having to deal with the confrontation with LuAnn. As soon as the ladies sit down Dorinda starts in on Ramona.

She tells her “I thought you were going to relax at the hotel. Ramona tells her “I had a very relaxing day at Bagatelle.” Dorinda says “I arranged this trip so that we could all hang out together, not so that we could split up and go our seperate ways.” Jules says “Come on. We are all friends. We should be able to do our seperate things and all come together and enjoy each other.”

The next day, as everyone is packing to leave, LuAnn goes to talk to Bethanny about the questions she has been asking about her relationship with Tom. She tells Bethenny “I don’t appreciate the accusations you made about Alex cheating on me. We had a good marriage.”

Bethenny tells her “I liked Alex and I apologize for that.” LuAnn accepts her apology. Bethenny then tells her “I have something to tell you about Tom.” LuAnn becomes very upset. Bethenny goes on. “I don’t want to be the one to do this to you. These are not just rumors. There are pictures.” LuAnn becomes physically distraught and flees from the room requesting that the cameras stop filming her.