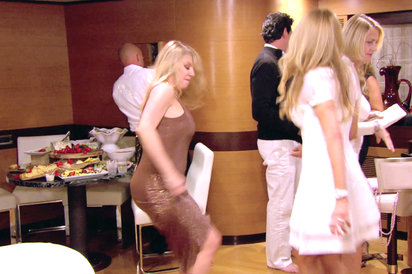 The Real Housewives of New York returns to Bravo tonight with all new Wednesday, August 3, season 8 episode 18 called, “Body of Evidence,” and we have your weekly The Real Housewives of New York recap below. On tonight’s episode, with Luann de Lesseps’ engagement party fully underway, the ladies celebrate in style with mixed emotions and mixed cocktails.

On the last episode, after cancelling Mexico and Hawaii because of Bethenny’s health issues, the ladies decided to vacation in Miami. Did you watch the last episode? If you missed it, we have a full and detailed The Real Housewives of New York recap right here for you.

On tonight’s episode as per the Bravo synopsis, “with Luann’s engagement party fully underway, the ladies celebrate in style with mixed emotions and mixed cocktails. On a morning yacht cruise, Jules struggles with long-distance parenting. Sonja’s feelings about Luann’s engagement finally surface, while tensions between Luann and Ramona boil over. The ladies arrive in Miami and meet up with Bethenny who she tries to determine the severity of the secret/scandalous information she’s been given.”

On this week’s episode of The Real Housewives of New York City LuAnn is preparing for her engagement party while Sonja, Carole and Ramona talk about the relationship between Tom and Sonja when LuAnn began dating Tom.

When the ladies are introduced to Tom and LuAnn’s friends they are not impressed. Sonja says “These are not the Palm Beach people we were expecting to meet. Some of them were all right, but the rates were ridiculous. If you put them all on one side of the boat the boat would sink.” Everyone is mingling and having a good time except for Sonja. She is still worried about her first encounter with Tom. LuAnn says “When I look at Tom and Sonja I see that we are all just friends.” Sonja is upset because of the way Tom is acting toward her. She says “Tom is acting way more distant. I am just BL and it is BS.”

As the party continues Ramona corners Tom and tries to confront him. She tells him “We dated a few times.” Tom says “No, we didn’t.” Ramona says “Yes, we did.” Ramona says “I don’t know why Tom just can’t come clean to LuAnn and admit that we dated. Who starts a relationship or gets engaged that way?”

Meanwhile, Sonja is having her own issues. While she is trying to deal with her issues with Tom she is also having to fend off advances from one of the gentlemen at the party. She says “I wonder why he is flirting with me while he is engaged.”

As the party continues and the drinks flow the women loosen up and the party really starts to happen. Carole and Ramona step out on to the deck to talk for a minute and get some fresh air. Carole tells her “It was cute when Tom told you that you smelled like grapefruit.” Meanwhile, inside Sonja is trying to be nice and goes over to LuAnn and congratulates her. Sonja says “Just be nice when I try to congratulate you and don’t blind me with your ring when I am already feeling bad.” LuAnn thanks everyone for coming to the party and says “It is always a good party when there is no ugliness.”

The next morning Jules calls home to check on the kids. They are with Micheal’s parents rather than with him. They are sad and upset. Jules calls Micheal and confronts him. She asks him “Where are you?” He tells her “I’m in New York. I had a million things to do.” Jules is very upset. She tells him “Why are they there if you aren’t going to spend time with them?”

The morning after the party Dorinda goes to wake up Carole. The two sit down to discuss the party. Carole tells her “Tom and Ramona went outside five or six times.” Dorinda says “The stories aren’t gelling and we need to get the stories straight.” She calls Ramona into the room. Ramona recounts the story of how they met and their first date and Dorinda asks them when this happened. Ramona tells her “This was in August.” LuAnn enters the room while they are talking to tell them that breakfast was being served. Dorinda says “You never knew that he was dating someone?” Ramona says “No, Never.”

Dorinda heads upstairs to have breakfast with Dorinda. Ramona and Sonja are still downstairs talking. Dorinda mentions to LouAnn that they are still talking about the situation and LuAnn is steaming. She heads downstairs and confronts Ramona. She tells her “Stop talking about the situation with Tom or I am going to throw you off the side of the boat.” Ramona fires back and tells her “You kept this going in the press and now everyone thinks I had a relationship with Tom instead of Sonja.” LuAnn denies that she said anything about Ramona and Tom to the press and accuses her of being jealous of her engagement to Tom She tells Ramona “Show me where I mentioned your name in the press.” Ramona pulls out the article and points it out to her. LuAnn heads off in a huff.

Ramona heads up to breakfast and she is very upset. She tells the girls what happened when LuAnn came downstairs and then tells them “Now Sonja is crying.” Dorinda asks “Why is Sonja crying?” Ramona says “Because she has unresolved feelings for Tom.” Jules says “Why do either Tom or Dorinda get a pass for their despicable behavior?”

Jules is dealing with her own issues. She calls her children to check on them and discovers that they are with her in-laws. They are very upset and so is she. She calls her husband Michael and confronts him. She asks him “Where are you?” He tells her “I am in the city. I had a million and one things to do today.” Jules tells him “What’s the point of having them if you aren’t going to spend time with them?” Michael tells her “I will see them later today.” Jules says “I feel awful that I can’t even go on a four-day vacation and have Michael take care of his kids. When LuAnn comes back up on deck she asks for an apology from Ramona and apologizes to her for yelling at her. She tells Ramona “I want you to stop talking about Tom and just let it go and I’m sorry for yelling at you.” Jules says “I hope these ladies can behave themselves when we get to Miami, but I doubt it.”

When they arrive in Miami Carole immediately calls Bethenny to check in on her. Bethenny seems really bothered. She tells Carole “Come see me when you get to the hotel. I really need to talk to you.” Carole tells her “Ok.” When they arrive LuAnn is the first one to rush in and see Bethenny. Bethenny is stunned. She begins questioning LuAnn about her relationship with Tom and whether or not they were faithful. LuAnn says “I think Bethenny is up to something with all of her questioning. I don’t think she is being malicious, but she is up to something.”

When she finally gets Carole and Ramona alone Bethenny drops a bombshell. She tells them “Tom is not wealthy on his own. He dates wealthy women and gets them to pay for everything.”

Then she tells them “I asked LuAnn if they were allowed to see other people because he was seen in a hotel lobby making out with some other woman.” Both Carole and Ramona are blown away by this news. Carole says “Don’t tell me that. It makes me feel sorry for her.” Ramona sort of laughs and says “It fits in with who Tom is.” Carole asks Bethenny “Are you going to tell her ?” Bethenny looks stunned. Carole then wonders if maybe it was just someone who looked like Tom until Bethenny told them that she had pictures of Tom and the girl.