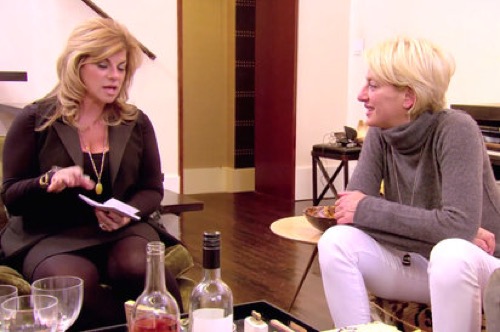 The Real Housewives of New York returns to Bravo tonight with all new Wednesday May 11, season 8 episode 6 called, “Tipsying Point,” and we have your weekly recap below. On tonight’s episode, Carole Radziwill hosts a psychic session that turns ugly when Dorinda Medley gets an unexpected reading that leads to raised voices between her and Ramona Singer.

On the last episode, Jules aired her grievances to Dorinda and Carole concerning Bethenny’s abrasiveness during the Hamptons trip. Bethenny gained a newfound respect for Jules when Jules opened up about a personal struggle. Did you watch the last episode? If you missed it, we have a full and detailed recap right here for you.

On tonight’s episode as per the Bravo synopsis, “Carole hosts a psychic session that turns ugly when Dorinda gets an unexpected reading that leads to raised voices between her and Ramona. Later, Jules opens up to Carole about turning her struggles into positive actions to help others.

At Sonja’s birthday party, Luann and Ramona bicker over Luann’s influence on Sonja and Luann’s ill-received birthday gift to Ramona. And Sonja reveals her latest business venture that immediately causes concern amongst some of the women.”

This week on Real Housewives of New York City Sonja is having a facial at home. Sonja says “I may be frugal but I am not skimping on my facials especially with my birthday coming up.” Sonja is discussing her guest list and the people who have RSVP’d. She says that Ramona, Dorinda, John and LouAnn will all be there. She also says “I hope Bethenny will come because I love when I have a quiet moment and I don’t have to run her down.”

Carole has invited LouAnn, Jules Bethenny and Dorinda over to her new apartment for a psychic reading. LeeAnn says ” I am insulted that I am the last one to see Carole’s new apartment. It feels like it took a psychic to get her to invite me to her apartment.” The psychic talks to Jules first and tells her “You are finding your place and purpose in this life. You stand up for women’s rights.” Jules becomes emotional as she tells them “I have an eating disorder that I have just become more open about and I try to help other girls going through the same thing.” Kim moves on to Dorinda and tells her “I see a name starting with J.” Dorinda mentions her dad and her brother. Then Kim zeroes in and says “The name is John.” Dorinda mentions a few other people before getting around to her boyfriend. Kim tells her “Stop there are too many John’s.” Dorinda laughs and says “That doesn’t even sound right.” She also mentions Dorinda’s dead husband Richard and his brother Robert and tells her “He tells me he sends you the coins.” She asks Dorinda if she wants to know what Richard thinks about her current boyfriend. Dorinda says “Yes.” Kim tells her “He says he’s ok for now, but he won’t provide that safety that you need.”

The reading continues as Kim moves on Bethenny and tells her “Your father is coming through and he says not to say that you won’t get married again.” Bethenny scoffs at that. Dorinda asks if she sees her getting married again and Kim tells her “Yes, but it won’t be to John.” Ramona says “Thank God.” This angers Dorinda and she tells her “Don’t do that. John doesn’t like you either.” Bethenny has to leave and she says “I am not getting married again and thank you very much.” Kim moves on to Ramona and mentions a picture of the two of them. Ramona breaks down in tears and says “I would never take a picture with my dad because there was so much animosity between us. That picture was taken the last weekend he was alive. Dorinda goes over and hugs Ramona. She tells her “Please let it go about John. You’re my friend and I love you.” Ramona apologizes and tells Dorinda “It just came out.” Kim tells Carole “I think you did this because you knew they needed it in order to let other emotions come out and it has helped you and them. “

Carole heads over to Jules’ apartment. Jules prepares snacks for them and tells Carole “The psychic was incredible.” Carole says “I’m not totally into it, but it was nice.” They discuss the argument between Ramona and Dorinda and Carole says “I thought that was going to be the phase where everyone just got up and left.” Jules addresses her eating disorder and Carole says “I suspected Jules had an eating disorder. She definitely has a complicated relationship with food.” Jules says “I feel comfortable with Carole because she seems really genuine and nice. She is also a skinny girl.” Carole tells her “You should think about how you articulate your issues. You could speak at colleges or write about it.” Jules says “I definitely don’t want to write about it.”

Dorinda and John go out to dinner and discuss Ramona’s birthday lunch. Dorinda names the restaurant and says “We have to go there more often.” John says “We can go there for your birthday, but I would never follow in her footsteps.” Dorinda says “You have to stop that. Neither one of you take my feelings into consideration. Dorinda then goes on to try and tell him about the psychic reading. John pipes up and says “What did she say about Ramona? Maybe she gave her some insight into why she is the way she is.” This comment makes Dorinda angry and she tells him “For my sake you have to be nice.” John responds “When have I not been nice? Ramona has been rude to me three times.” Dorinda “Here we go again back to you.”

Dorinda tries to get John to acknowledge his role in the mess between him and Ramona. Finally she just tells him ‘Say thank you darling for sticking up for me.” Dorinda gets so frustrated she tells him “Get an EZ pass back to Queens because I’m done.”

Sonja is preparing for her birthday party. She says “I don’t feel like throwing a birthday party for myself, but this will give me a chance to introduce my latest business venture. I have taken Bethenny’s advice and I haven’t said anything about my newest venture.” She tells her friend “Bethenny hasn’t RSVP’d yet, but I really hope she shows up to support me in my new venture.”

Bethenny is out in her skinny girl truck and she is surprised by how many customers come out to try her skinny girl ice cream and shakes. After they close the truck down she meets with her staff and tells them “I know I am not an easy person to work for, but you guys killed it today and proved that you are worthy of working here so congratulations.”

On the day of Sonja’s party everyone is beginning to arrive. Sonja wants to make sure that there are plenty of food and drinks. Dorinda comments about Jules size saying “She is a true skinny girl.” Jules says “Thank you very much. I am going to be hungry soon.”

Sonja is upset that Ramona is retelling the story of LouAnn regifting her gift. She says “Meanwhile what did you bring me for my birthday?” LouAnn confronts Ramona about the comments she made about being concerned that LouAnn is staying with Sonja. Ramona says ” LeeAnn is a bad influence on Sonja. We are supposed to be taking her away from drinking and sleeping with random men and LeeAnn is the epitome of these behaviors.”

Ramona confronts LeeAnn about her regifting the gift she had given her. LeeAnn laughs and says “So you didn’t like the gift I gave you?” Ramona is so angry she tells LeeAnn it is wrong to do that. She also confronts her about talking about Jules.

The argument continues until Sonja asks John to get the attention of the room so that she can make a big announcement. Sonja thanks her friends for being there through her highs and lows. Then she says “Things are about to turn around again. I want to announce we are going to be passing around trays of my new Proseco.” They asked what the name of it will be and Sonja says “Tipsy girl.” Jules says “Bethenny is very protective of her brand and when she hears about Tipsy Girl it is going to go down!” Dorinda says “Bethenny is an ocean and this is just a little stream. I don’t see why she would mind.”