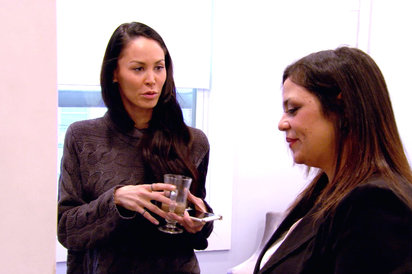 The Real Housewives of New York returns to Bravo tonight with all new Wednesday May 18, season 8 episode 7 called, “Airing Your Dirty Laundry,” and we have your weekly recap below. On tonight’s episode, when Sonja Morgan stops by Bethenny Frankel’s office for a chat with her friend and mentor, she is caught off guard by Bethenny’s response to her new business

On the last episode, Carole hosted a psychic session that turned ugly when Dorinda got an unexpected reading that leads to raised voices between her and Ramona. Did you watch the last episode? If you missed it, we have a full and detailed recap right here for you.

On tonight’s episode as per the Bravo synopsis, “when Sonja stops by Bethenny’s office for a chat with her friend and mentor, she is caught off guard by Bethenny’s response to her new business. Meanwhile, Luann officially moves in with Sonja, Jules hunts for a new nanny, and Carole fosters a kitten while working on a vegan cookbook with Adam.

Luann’s former ex causes a scene at a party hosted by Dorinda and her boyfriend, John. When Ramona and John get into an argument over the incident, it’s Dorinda and Ramona who find themselves on the outs after an epic sidewalk screaming match.”

On this weeks episode of The Real Housewives of New York City Sonja is preparing for LouAnn to move in with her. When LouAnn arrives Sonja shows her that she has placed her in the upstairs room. LouAnn says “I think Sonja feels a little lonely without her daughter around. I am like the man in this relationship with Sonja.” LouAnn asks Sonja about Tipsy Girl. Sonja says “I have been working with Peter since ’89. I have known him way longer than Ramona.” LouAnn asks her how she thought Bethenny might feel about the fact that her product is named Tipsy Girl. Sonja says “It shouldn’t be a problem because there are many restaurants with the name Tipsy in them.” She also says “I am not looking to become a mogul like Bethenny. I just want to make my mark.”

Ramona, Bethenny and Carole are meeting for lunch. Bethenny is really upset about the fact that Sonja has named her product Tipsy Girl. Bethenny says “I am really upset because her choosing that name is like a rip off of my company name.” Ramona and Carole agree and Ramona says “If she is not careful this can cost her a friend.” Bethenny tells them “Sonja wants to meet with me because I guess she considers me some sort of mentor and she wants my opinion on her producr.” Both Carole and Ramona understand why Bethenny is so upset. Bethenny tells them “I don’t come for anyone unless I feel they are coming for me, and with this I feel like Sonja is coming for me.”

Dorinda and Ramona meet up. Ramona says “Dorinda and I’s relationship has gotten really strained lately and it’s because of John. I just can’t seem to accept him, but I need to try if I want our relationship to get back to the way it was.” Ramona asks Dorinda “What do you think of this whole Tipsy Girl thing?” Dorinda says “I can’t believe that she is doing that.” They move on to talk about their relationship and Ramona asks her “Are we good?” Dorinda tells her “We are good.” Dorinda tells her “I can’t deal with the strain anymore. I need to be able to walk into a room with you and him even if you have to pretend.”

Bethenny and her assistant Meghan are discussing business. She asks Meghan “What time is Sonja coming here today?” Meghan tells her “12:30.” This sends Bethenny almost over the edge. She says “I can’t believe I even have to have this conversation with her. It is just ridiculous.”

Sonja and Bethenny sit down to talk about business. Bethenny tells Sonja “I have heard some things about one of your partners.” Sonja gets really tense and asks “Like what?” Bethenny tells her “I have heard from people that he is involved in some shady dealings and Ramona told me about a restaurant that he was supposed to partner in that never came about.” Sonja contradicts her and tells her that the restaurant does exist. Bethenny tells her “I know it does, but he doesn’t own it.” She also asks Sonja about her distributors for her product. Sonja tells her “Pierre has 70 stores that it will be distributed in.”

The argument continues and Sonja tells her “You are my mentor and I look up to you.” Bethenny tells her “I brought you into my world and into my business summit and this is what you want to do. I want nothing to do with you.” Bethenny also tells her “I think you are a fraud and no one believes any of it.”

Sonja is really hurt and upset by Bethenny’s comments. She starts to cry and tells her “I just came out of chapter 11 and I wanted to do something to help me get back on my feet. I never meant to do anything to hurt or copy you.” Bethenny tells her “I wish you well and I hope it goes well for you but I don’t want anything to do with it.” She then tells her “I have to go. I wish you well and I don’t want to have this conversation anymore.” Bethenny then gets up and walks away.

Jules and Michael are looking for a new nanny. They conduct interviews with Nannies. One of the possible replacements is able to speak Spanish and this impresses Jules. She tells her “Michael speaks Spanish with the kids.” Michael then engages her in a short conversation in Spanish. Jules is showing her around the house. She takes her into her daughters room and has her pick out an outfit for her daughter to wear to school. Jules is impressed by her choice, but not so much by her language skills so she says “Back to the drawing board.”

Carole has decided to foster a kitten before they are given to Forever Families. Carole says “This is a good way to use my Instagram and to help get kittens out of shelters. Adam has come home from his movie shoot and he tells her “I think this is more than just a foster. I think you have adopted this kitten.” Carole tells him “No. It’s a foster. I don’t get attached to things that easily.” Carole and Adam are talking their creation of a Vegan cookbook. She tells him “I have to write about who you are.” Adam says “You don’t have to do that. I have already written something.” Carole tells him “You stick to the recipes and let me worry about the words.”

LouAnn meets up with Ramona and Carole at Sushi Roxx for dinner. They are talking about LouAnn’s love life. She tells them “I am having a bit of a dry spell.” Ramona responds “A dry spell? This from the woman who is dating the musician and the carpenter? If that’s a dry spell I would hate to see what a wet spell looks like.”

Dorinda and John are out to honor one of the designers that John works for. Jules tells Dorinda “You look amazing.” LouAnn and Sonja are talking about Sonja’s meeting with Bethenny. Sonja tells her how upset Bethenny got over the name. LouAnn says “She is like one of those toys that you wind up too tight and then can’t unwind.” Ranona shows up at the event. Dorinda says “I didn’t send an invitation to Ramona and I don’t even know why she is here. Maybe she wants to make up with John.” Meanwhile LouAnn is having her own issues when she runs into a man that she used to date. LouAnn says “I met him last summer and the relationship ended badly. I have to leave.”

John runs over to confront Ramona and the guy and tells them both “It’s my event and I want you both to leave.” LouAnn’s ex is drunk and says “He is very rude.” Ramona stands her ground and tells John that she is not leaving. John continues to try and force them out. Dorinda goes outside and confronts Ramona outside the building. She tells Ramona “How dare you come here and make a big scene like this.” Dorinda tells her “Get out of here before I call the police.” Ramona says “I feel bad and I need to leave.” John comes out and pushes Ramona. This angers Dorinda and she tells him “I’m leaving and going home.” John seems confused and asks her “Why are you leaving? Those two were the problem and now they are gone.” Dorinda climbs into a cab and tries to leave but John steps in between the door to keep it from closing. Dorinda says “John’s actions were correct, but his reactions are what devalue it. You never put your hands in a woman’s face.” She then tells him “Don’t try to play gentleman with me. I just want to leave.”