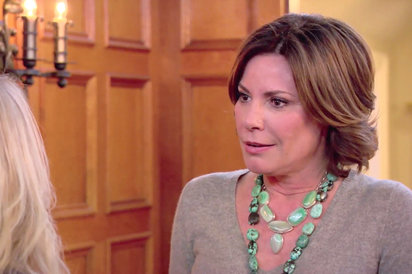 The Real Housewives of New York returns to Bravo tonight with all new Wednesday, June 1, season 8 episode 9 called, “December: Berkshires County,” and we have your weekly recap below. On tonight’s episode, the holiday spirit hits a rough patch of ice at Dorinda Medley’s Berkshires holiday party, when tensions between Luann de Lesseps and Bethenny Frankel reach explosive levels.

On the last episode, Bethenny hosted a holiday gift exchange party where the hot topic of discussion was a trip to the Berkshires. Did you watch the last episode? If you missed it, we have a full and detailed recap right here for you.

On tonight’s episode as per the Bravo synopsis, “the holiday spirit hits a rough patch of ice at Dorinda’s Berkshires holiday party, when tensions between Luann and Bethenny reach explosive levels. Ramona gets wrapped up in the chaos and accuses Luann of breaking the girl code. As Luann attempts to defend herself, Dorinda has an epic meltdown of her own. Meanwhile, Jules’ first weekend away with the ladies takes a turn as she is confronted with a family emergency.”

On this weeks episode of Real Housewives of New York City LouAnn and Bethenny continue talking. Finally, LouAnn asks her “What else is going on?” Bethenny tells her “Nothing I am just working.” Bethenny tells LouAnn “You are so full of it. You can’t say that we came up with the idea together.” Carole arrives and says “I walk in I hear Bethenny arguing with a man only to discover it’s LouAnn.” Bethenny accuses LouAnn of dating Ramona’s ex. Ramona gets upset and tells LouAnn “You said that you were going to be next for him.” LouAnn tells her “I did not.” Ramona says “Yes you did and you broke the Girl Code.”

Meanwhile, the fight rages on between LouAnn and Bethenny continues. Bethenny addresses LouAnn’s comment that Bethenny had cut her hair to look like LouAnn. She tells her “I don’t want to look like you and I don’t bang my hairdresser.” LouAnn says that she never slept with her hairdresser. Bethenny calls her a tramp and LouAnn tells her “I am not a tramp. I am simply dating around and happened to find a guy that I really like Bethenny tells LouAnn “I am calling you out. You are a slut, a liar and a snake.”

As the argument rages on Dorinda says “This is why I didn’t have Sonia here. She couldn’t handle it.” Dorinda says “I pictured sugar plums and dancing in my head. The party is going all wrong.” Bethenny also accuses LouAnn of bringing men home to Sonja’s house. LouAnn says “Who told you that?” Bethenny says “Sonja did.”

LouAnn goes outside where Jules is sitting. She sits down next to her and says “Bethenny had no right to attack me the way she did.” Jules is trying to deal with her dad being sick and having Pneumonia. LouAnn continues to try to talk to her and Jules says “OK LouAnne she called you a slut. I am dealing with real life here. My dad is sick and he doesn’t sound well. This is real life.”

Meanwhile, Bethenny is upstairs talking to Ramona and Carole about the situation. She tells them “She accused me of wanting to look like her.” Carole tells her “Well your haircuts are similar, but she is full of crap and we all know it.”

Dorinda finally steps outside and LouAnn jumps all over her. She tells Dorinda “As the hostess you should have stepped in and defended me.” Dorinda tells her “It is not my job to defend you. I am the hostess, not the referee.” LouAnn heads back inside and stops in the kitchen. She sees the birthday cake that Dorinda’s mom bought her. Dorinda says “It’s not my birthday. My mom bought it for me. “ LouAnn continues to fume over the fight with Bethenny and finally Dorinda snaps and says “If you don’t like my food and decorations then go home. You all have my permission to go home. I wanted to have a nice weekend and this has ruined it.”

Finally, everyone calms down and Jules pulls out the games she brought for them to play. LouAnn says “We should play this one and get to know each other.” Carole says “I think we know each other well enough.”

Back in New York Sonja is getting a consultation about plastic surgery. When she meets with the Dr. she asks him about a procedure to tighten up her vagina. The nurse tells her “He has been doing this for about three months.” This makes Sonja extremely nervous. The Dr. shows her a procedure that allows them to use a probe to help with the tightening. She decides to have that procedure as opposed to the more invasive one. When the Dr. finishes she tells him “I’m glad this was just a one night stand.” They both laugh.

Ramona and Bethenny are talking and LouAnn heads back upstairs with her luggage. Bethenny says “I always go back to compassion and regret with LouAnn. This didn’t just start it has been going on for years.”

Carole and Ramona are talking and Carole tells her “Do you know that she invited me to her party after she called me a pedophile? Who does that?” LouAnn apologizes to Dorinda. Dorinda says “It’s funny how everyone in my house is uncomfortable except LouAnn, but she is the one making everyone uncomfortable.”

Ramona and LouAnn are talking and Ramona asks her “Did you call Carole a pedophile and then invite her to your party?” LouAnn says “She wrote some awful things on social media.” Ramona tells her that she should apologize for calling Carole a pedophile. What neither woman knows is that Carole is hiding in the closet listening. Carole says “I know I am being a coward by hiding in the closet and ease dropping, but I need to hear what LouAnn says about me when I am not around because it is different then what she says to my face. LouAnn sends the apology text to Carole but Carole doesn’t acknowledge or respond to her. LouAnn asks her “Carole can you check your phone to see if you are getting my texts?” Carole tells her “No I haven’t gotten a text from you since earlier.”

LouAnn and Ramona are talking and LouAnn asks her “Who are you dating?” Ramona tells her “I am not going to tell you who I am dating. It’s the girl code.” Ramona then moves on to try and help LouAnn salvage her relationship with Bethenny. LouAnn says “They don’t deserve a text from me, but I am trying to salvage the weekend because I feel bad for Dorinda.” Carole and Bethenny are in the same room and they both share the texts they receive with each other. Bethenny says “This is LouAnn trying to apologize the whole night.” Carole says “LouAnn is not to be trusted.”

Dorinda is in the kitchen and LouAnn comes in. She asks if she can help and Dorinda tells her “No.” She then asks LouAnn what happened with Ramona. LouAnn tells her “I think Ramona is mad because Tom likes me better. I don’t go around checking into who she’s dating and what she’s doing.” LouAnn then asks “What is she trying to do, take down all her friends?”