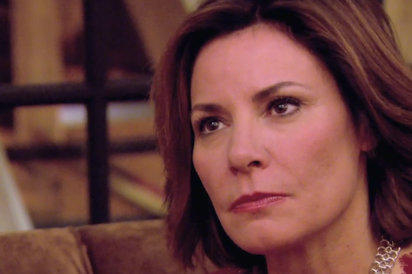 The Real Housewives of New York returns to Bravo tonight with all new Wednesday, June 8, season 8 episode 10 called, “Unhappy Holidays,” and we have your weekly recap below. On tonight’s episode, the saga in the Berkshires continues with round two of Bethenny Frankel vs. Luann de Lesseps. Back in the city, Jules has to adjust to life without a nanny.

On the last episode, the holiday spirit hit a rough patch of ice at Dorinda’s Berkshires holiday party, when tensions between Luann and Bethenny reach explosive levels. Did you watch the last episode? If you missed it, we have a full and detailed recap right here for you.

On tonight’s episode as per the Bravo synopsis, “the saga in the Berkshires continues with round two of Bethenny vs. Luann. Back in the city, Jules has to adjust to life without a nanny. Then, the ladies round up for Ramona’s holiday party where Ramona encourages Luann to apologize to Carole, again.  Sonja’s feeling the pressure from Luann and Ramona to apologize to Bethenny, but it doesn’t go quite as Sonja had planned.”

On this weeks episode of Real Housewives of New York the battle between Bethenny and Luann continues. Bethenny tells her “I can’t have an honest conversation with you because you are not honest.” Luann asks her “How am I not honest?” Bethenny precedes to call her out about all of the things that she has said about Carol dating Adam. Bethenny tells her “You have dated younger men and then you rag on Carol for doing it.” While the argument rages on between the two of them Dorinda and Jules begin playing Twister.

Sonja is at home packing a care package. Her team has come over to help her. She says “I’m feeling a little lonely because all of my friends are in the Berkshires and I am at home alone. Thank goodness for team Sonja. They have come to keep me company.” After they finish packing.

Bethenny tells Luann “I regret the way I spoke, but you bring out the worst in me.” She also tells her that Ramona is an example of how women feel about her. Luann says “Of course she is because I am dating someone she wants.” Bethenny tells her “People think that you are a hypocrite. You have sex with younger men and then criticize others for doing the same thing.” Luann fires back and says “That’s not true. I am loyal to all of my friends.” As she is speaking Dorinda steps into the kitchen to bring in some dishes. Luann says “Dorinda can vouch for me.” Both Carol and Bethenny tell her “Don’t bring Dorinda into this.” Dorinda says “I just want to burn my house all the way to the ground right now.” Luann says “You are picking things apart and compiling a list to bring me down. Why?” Jules comes into the kitchen and says “Can we lower our voices please?”

Dorinda says “Bethenny seems to have it out for LouAnn and LouAnn is feeling very upset. I feel bad for her.” LouAnn mentions Sonja’s Tipsy Girl idea and Bethenny says “I don’t want to have anything to do with that. I’m sorry. I spent days on the phone dealing with partners about the whole thing and I don’t want to talk about it anymore.” After the argument dies down Jules suggests that they sit down to eat the lasagna. While they are eating Santa Clause shows up to bring gifts.

Carole has had enough and gets up and leaves the table. Dorinda asks “Where did Carole go?” Jules says “I think she has had enough and she went upstairs.” Jules gets up to go check on her. Just when we think things have settled down between Bethenny and Luann they begin fighting again. Bethenny says “Who would trust their man around you? You flirt with every man you come into contact with.” Luann denies this. Then she turns to Ramona and says “I want to hear what Ramona said to you.” Ramona is uncomfortable at being brought into this raging battle. She tells Luann, a bit reluctantly, you flirted with a bunch of men when we went out of town. Luann fires back and says to Ramona “What about the time you flirted with the restaurant owner who was a friend of Bethenny’s?” The battles rages on.

Bethenny has finally had enough. She tells Luann “It has been a long night so I am going to go upstairs and wash my face. I’m sorry I called you all of those names and good night.” After she heads upstairs Dorinda and Luann are downstairs talking. Luann says “Thank God Sonja wasn’t here. She wouldn’t have been able to handle it.” Dorinda agrees. LouAnn says “I wish I had stayed home with Sonja.”

The next morning everyone wakes up. Bethenny and Carole are in the bedroom. Bethenny says “I have never had an argument like that. I have never called anyone a slut and a whore.” Carole says “If you had called me those names it would have been over. The two women make the decision to leave. Jules and Dorinda are also talking about the night before. Dorinda says “You and I are the only two who came and actually tried to have fun.” Jules laughs and tells her “I forgot I had kids. I didn’t even call them last night.” Both women laugh. Jules goes on to say “I don’t like all the fighting and the noise, despite all of that I actually managed to relax.”

When they head downstairs breakfast is being made. Bethenny and Carole are making a break for it, but Luann spots them. She points them out to Dorinda LouAnn asks “Are they leaving without saying goodbye?” Meanwhile, Carole and Bethenny decide to go back and say goodbye to everyone. Awkward hugs are exchanged and everyone heads out much to Dorinda’s relief.

Carole and Bethenny meet up to talk about the events of the weekend before Ramona’s party. Bethenny says “I am not sure what happened last night. All I know is that the words slut and whore were thrown around.” The two women talk about Ramona’s holiday party. Bethenny says “I don’t really care if I talk to Luann and I also don’t want to talk to Sonja. I just kind of want to do a drive by. Get in and get out.”

The night of the party arrives and Ramona and LouAnn are talking before the others get there. Ramona tells her “I just want everyone to have a good time before we all go away on our separate holiday vacations.” She also tells Luann “The problem that Carole has with you is that you didn’t apologize for calling her a pedophile sooner.” Luann says “I want to move past it and hopefully rebuild our friendship if that’s possible.” Ramona also hopes to try and broker peace between Sonja and Bethenny and Luann and Bethenny.

As everyone arrives to the party Luann goes over to Carole and tells her “I’m really sorry for what happened between us and I want us to make peace.” Carole tells her “Ok..” She says “This apology is slightly more genuine than the last one.” Luann then turns to Bethenny and apologizes for the whole incident in the Berkshires. Bethenny tells her “It’s fine, but you have to say that you had no hand in creating the Skinny Girl brand.” Luann does this and the two are able to sit down and have a brief conversation. LouAnn tells Bethenny about her boyfriend.

Bethenny is getting ready to leave when Sonja shows up. Ramona tells her “Bethenny is leaving in five minutes. Go over and talk to her.” Sonja says “No.” Bethenny leaves before the argument can ensue.

All of the ladies are talking to Sonja about the incident between her and Bethenny. Ramona says “You said you were going to drop this whole Tipsy Girl thing and try to make amends with Bethenny.” They also confront her about texting them all over the weekend. Carole says “You were texting all of us about being left out of Dorinda’s event.” Luann tells her “Be glad you weren’t there.

Sonja tells them :“I never told you guys that I would drop the Tipsy Girl idea. I said I would see how Bethenny reacts and she left.” Sonja tells them “I felt left out. Dorinda was the hostess and she didn’t invite me.” Dorinda says “I want you in my home one on one. I don’t think the group was the right place for you.” Sonja gets very angry and storms out. Luann follows her and tries, unsuccessfully, to calm her down. After Sonja’s meltdown, everyone prepares to leave the party and head off their own way.