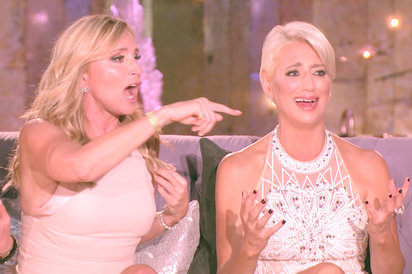 Did you watch last week’s RHONY Reunion show part 2 where Bethenny Frankel got emotional over her current life situations? Jules found herself on the defense when Bethenny revealed information about her marriage?  If you missed the episode and want to get caught up before tonight’s episode we have a full & detailed The Real Housewives of New York recap, right here for you!

On tonight’s RHONY episode as per the Bravo TV synopsis, “On part three of the reunion, Sonja Morgan is revved up to set the record straight about how she feels she was treated by the ladies this season. The ladies then change their tune and laugh it up when they discuss the lighter side of Miami. But Luann de Lesseps finds herself in the hot seat when the discussion gets heavy and turns to her decision to stay with Tom.”

As  usual, tonight’s episode will be filled with the usual Housewife drama! Make sure to bookmark this spot and come back for our The Real Housewives of New York recap tonight between 9PM – 10PM ET! While you wait for our recap make sure to head over and check out all our spoilers, news, recap of RHONY!

This week on part three of The Real Housewives of New York City reunion they start out talking about Sonja’s issues this season. Andy tells her “When you stopped drinking you seemed much clearer and much more fun.” Sonja says “I agree with that. I can stop drinking whenever I want to. I am not addicted to drinking.”

LuAnn jumps in and congratulates Sonja for cleaning up her act and tells her “You look great.” Andy then asks her about the confrontation between her and Bethenny in her office. Sonja says “I appreciated it because Bethenny was venting her true feelings. She wasn’t being hypocritical.”

Dorinda jumps in and tells Sonja “You are full of it. Bethenny made you cry and treated you terribly and you let her get away with it, but I don’t invite you to one party and I am a terrible friend?” A fierce argument ensues and Sonja tells Dorinda “You left me out of being with my friends in the Berkshires,” Dorinda tries to defend herself and tells Sonja “I didn’t think you could handle it. Look at the mess it turned into.”

The argument rages on until Sonja gets up and starts to walk off stage. Andy asks her “Where are you going?” Sonja says “Until she admits that she doesn’t care about me I don’t want to be part of this show.” Andy and the ladies manage to convince her to sit back down and stay on the show.

When they return the topic of conversation is the ladies’ trip to Florida. Andy asks LuAnn if she was worried about bringing two women who had dated Tom on the boat. LuAnn says “Nos. Tom is friends with most of his exes and I wanted the ladies to be there to celebrate with me.” Sonja addresses a really mean comment that she made about LuAnn’s engagement ring. She says “I should be slapped for that comment. I was just being petty and I really didn’t mean it.”

Andy then moves on to address Bethenny calling Dorinda the village idiot. Dorinda says “I am e not an idiot because I want to believe in happiness.” Bethenny says “The village idiot is always the last to know.” Andy then asks Bethenny “Do you feel as though you browbeat your friends?”

Bethenny says “No, I don’t do that.” Jules speaks up and says “Bethenny is the alpha female of all of us and sometimes it can come off that way.” Bethenny says “Dorinda can do that sometimes.” Dorinda fires back “You do that, not me.”

Andy asks Bethenny why the person would send her the pictures. Bethenny says “This person was shocked that this was going on and there were a couple hundred people there.” Andy asks LuAnn “You said on camera that you had an open marriage.” LuAnn says “I didn’t want an open marriage. We were separated and we didn’t want to tell our children.” Andy then asks Bethenny “Why didn’t you tell LuAnn before you told Carole and Ramona?”

LuAnn jumps in and tells her “If you were going to go to anyone you should’ve come to me or Dorinda because she introduced us and she was closer to me than anyone. Instead you three were laughing at me behind my  back.”  Bethenny takes offense and Carole is quick to jump in and tell LuAnn “We weren’t laughing at you behind your back.”

Andy asks Bethenny “Why did you ask LuAnn if Tom and she were monogamous?” Bethenny gets very upset because LuAnn continues to accuse her of trying to destroy her relationship with Tom and she threatens to walk off the show. Andy asks LuAnn “Do you believe in Bethenny’s sincerity?” LuAnn says “The fact that she had all of this information was a little too investigative reporting for me. She had all of this information and I was wondering how she got

it.” Bethenny tells her “I wanted to have all of the information in the world so that if you had questions I could answer them.” Andy asks LuAnn “What was your reaction to seeing the pictures?” LuAnn tells him “I was devastated. We had a fight that night and it was after I went to sleep. Tom was drunk and the woman was waiting and willing, not that I am blaming her, Tom was at fault.”

Andy asks Dorinda about the phone call she received from Tom. Dorinda tells them “It felt like I was being dragged into something I didn’t want to be in the middle of.” Andy asks LuAnn “Do you remember making the phone call?” LuAnn says “I didn’t make the phone call. Tom did.” Andyo asks “LuAnn what happened when you got back to New York and saw Tom?” LuAnn says “Tom was very sorry because he got caught with his pants down, but we decided to forgive each other.”

Andy asks her “What would you do if it happens again?” LuAnn says “If it happens again you girls had better tell me.” Ramona asks “Are you sure?” Andy says “I feel kind of crass asking this but I feel like Ramona knows something.” Ramona says she doesn’t know anything. Andy  gives LuAnn the last word. She says “Tom and I are in love and we are getting married. Thank you ladies for being there for me through one of the roughest times of my life.”

Andy asks Bethenny and LuAnn if they can get past their differences. Bethenny says “ Tonight opened up a new wound. I came here intending to invite you to Mexico and things got completely out of hand.” LuAnn says “I was obviously fed some wrong information and I apologize.” Bethenny tells her “This has to stop. I apologized to you in the Berkshires and I am going to apologize to you now.” LuAnn apologizes to her as well. Everyone goes around and says something nice about each other and they end the show with a group hug…