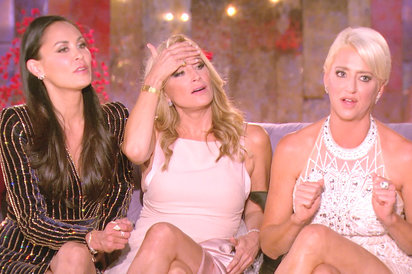 Did you watch last week’s RHONY Reunion show part 1 where Dorinda Medley relived her toughest, most embarrassing moments with John?  If you missed the episode and want to get caught up before tonight’s episode we have a full & detailed The Real Housewives of New York recap, right here for you!

On tonight’s RHONY episode as per the Bravo TV synopsis, “Part two of the reunion continues with Bethenny Frankel getting emotional over her current life situations. Jules finds herself on the defense when Bethenny reveals information about her marriage. After Dorinda Medley explains her tendency to meddle, the ladies take it into high gear when they start in on the Tom saga and his connection with Ramona Singer, Sonja Morgan and his fiancé, Luann de Lesseps. “

As  usual, tonight’s episode will be filled with the usual Housewife drama! Make sure to bookmark this spot and come back for our The Real Housewives of New York recap tonight between 9PM – 10PM ET! While you wait for our recap make sure to head over and check out all our spoilers, news, recap of RHONY!

This week on part two of The Real Housewives of New York Reunion kicks off with the women talking about Bethenny’s health issues from this past season. Andy asks her for the update on her health and Bethenny tells him “I’m well. I recovered from the surgery really quickly.” Bethenny also talks about how Ramona was there for her. Dorinda says “That’s one thing people don’t realize about Ramona is that she is there for people when they are sick.” Andy then asks her about her parents. Bethenny tells him “I talked to my daughter and she asked me if my parents were alive and I told her that my real daddy was dead but that my mother was alive. She asked me if she could talk to her so I reached out to her and called her. When I called her she said she knew nothing about me except what she read. I told her that I had a daughter.” Andy then asks Bethenny about her new boyfriend. He asks her “What does he think about you losing your cool in the Berkshires?” Bethenny tells him “He thinks it’s funny.” LuAnn says “It’s good to know that he thinks it’s funny that you go around calling me a whore.” Bethenny says “I don’t think he think he thinks that specifically is funny. I don’t get his copious notes.”

Andy moves on to talk to Jules. He asks her “There seems to have been trouble throughout the season.” Jules says “There was. We had been having issues throughout the year and I can’t talk about it.” Andy then asks Jules about the rumors that she came on the show to get divorced because she had signed a prenup. Bethenny butts in and says “I heard that from a mutual friend.” Jules responds by telling them “You shouldn’t believe everything you hear. We didn’t come on the show to get a divorce.”

Andy then asks Jules “Do you regret sharing your eating disorder with the world?” Jules says “No. I think it was something that needed to be done and Bethenny I felt comfortable with sharing that with you because you had been there before,” Carole tells her “I honestly thought you had been to rehab 13 years ago and had gotten help and you were regressing. i didn’t understand how it was until I watched the show back.” Bethenny and Jules get into a mini confrontation about the eating disorder issue and Dorinda says “It sounds like you are projecting your mother’s issues onto Jules.”  Andy asks Jules “What made you snap on Bethenny at the dinner at JoAnne’s?” Jules says “I had been holding back for awhile because i am not a confrontational person. I had been speaking to Dorinda and she told me to stand up for myself and finally I had just had enough.” Bethenny stands up and says “I think you represented Jews in a terrible light in New York with all of your jokes about having your nanny wait in line and the potty trainer for 2,000.” Jules gets really upset and tells her “Bethenny you are a terrible person. How can you say such awful things?”

When they return they talk about Dorinda’s meddling in all of the other ladies business this season. Andy asks her “When you saw the show did you really think you started all of that?” Dorinda says “I didn’t mean to start any drama. i really did go into things with a good heart.” Bethenny says “She stirred things up with Jules.” Dorinda tells Bethenny “No. I thought you were being mean and catty. I brought Jules in and she is quite a bit younger and you said some mean things about her and the way she raised her children.” Jules says “Dorinda was just being a good friend.” Andy tells her “Dorinda’s meddling ended your friendship with Bethenny.” Jules tells him “No one has the power to end one of my friendships unless I want to.” Sonja finally speaks up. She says “Dorinda meddler was not being a good friend when she went to lunch with Ramona and did not invite me. She talked about me, but never once did she say she was concerned about me.” Andy interrupts and asks Dorinda “Are you going to meddle anymore?” Dorinda says “No, i am going to stay out of it from now on, but I will protect Jules if it becomes necessary.”

When they return they move on to talk about LuAnn’s engagement to Tom and his involvement with both Ramona and Sonja. Andy asks Ramona to set the record straight about how many dates she has actually been on with Tom. Ramona counts out about four actual dates. Bethenny says “I ran into her and she said to me I am out on my third date with this guy and when do I sleep with him?” LuAnn sticks to her contention that Ramona and Tom never went out on a date alone and Bethenny continues to tell her that she saw them alone together. The ladies begin to argue heatedly. Suddenly Ramona turns and reaches into her bag. She pulls out her phone and shows how Tom had drawn a heart on her hand with their initials in it. Even Andy tells LuAnn that Tom has lied and told everyone that he had only gone out with Ramona one time.

Andy then asks Sonja “Did you think that there would be more between you and Tom?” Sonja says “No. I thought he was going to be eternal bachelor.” The argument intensifies. Andy asks Sonja “How many times did you sleep with him?” Sonja says “Enough times that I have been in his bed and he has been in mine.” LuAnn says “She doesn’t even remember.” Ramona says “She remembers.” Sonja says “I remember. Don’t disrespect me because I tell the truth.” The argument intensifies and Sonja and LuAnn both get very heated. Ramona tells LuAnn “All I am going to say is that I am worried about you.” LuAnn tells her “I appreciate your concern, but I love Tom. We’re getting married and I know what I’m doing.”

Sonja tells them about a confrontation that she had with Tom where he told her that if she didn’t tell everyone that they had only slept together one time that she was out. Sonja says “I love LuAnn and I am not going to lie.”..