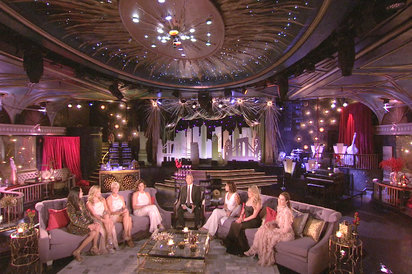 On the last episode, it’s the last morning in Miami and Luann was left devastated after Bethenny revealed the incriminating news about Tom. Did you watch the last episode? If you missed it, we have a full and detailed The Real Housewives of New York recap right here for you.

On tonight’s episode as per the Bravo synopsis, “Dorinda relives her toughest, most embarrassing moments with John; the women dish on Luann’s ex-boyfriend, Rey, and delve into Ramona’s love life; the accusations fly as the women rehash their trip to Massachusetts; Andy Cohen hosts.”

This week on part one of The Real Housewives of New York City Reunion special Andy kicks off the show by congratulating LuAnn on her engagement. He then asks Bethenny about her divorce. She tells him “The divorce is almost done. It has taken almost four years and we were married for two,” Andy then asks her “I know you are seeing someone. What can you tell us about him?” Bethenny says “Not much. I have done that before and it hasn’t worked out well.” Andy then moves on to commiserate with Jules about her divorce from Michael.

They move on to talk about Dorinda’s turbulent relationship with John over the season. Dorinda says “I really have to relive that again?” Bethenny says “I have to commend you that you have really thick skin for reliving  that again.” Dorinda thanks her. She also says “There were times when I wanted to run back to the Berkshires and quit the show,”  Andy reads a couple emails from fans that spark an argument between the ladies. Sonja says “The reason John rubs people the wrong way is that he is very loud and he says things that are not always correct.” Andy then asks Ramona “What made you think it was appropriate to tell Dorinda that John takes Viagra and messes around all night?” Ramona says “ had diarrhea of the mouth and it was a terrible thing to say. I never should have said it.”

Andy moves on to talk to Ramona about her life since her divorce as a newly single woman.  Andy asks her if she is seeing one special guy. Ramona says “No, I am having too much fun just seeing people.” Dorinda says “What’s so great about Ramona is that she is just enjoying dating. She isn’t looking to settle down and she is just having fun.” Andy tells her “There have been a lot of comments about how much lighter you seemed this season. Is that because of the divorce being finalized?” Ramona says “Yes. Mario and I spent so much time trying to figure out whether or not we were going to get back together and now that it is final we are much happier.”

Andy asks her “How are you and Maro now?” She says “We are on speaking terms. We share a daughter and a dog and it’s great.” Andy then asks Dorinda “You have said that some of the guys that Ramona has dated are real idiots. Is that how you really feel?” Dorinda kind of dances around answering the question. Andy moves on and asks Ramona “How does Avery feel about you dating?” Ramona says “I am not really dating. I am just seeing people. Avery is ok with that.” Andy then asks her “What does your daughter think of the new body?” Ramona says “She tells me I look fabulous.”

Next up they move on to talk about the blowout in the Berkshires between LuAnn and Bethenny. Andy asks Dorinda “Do you think there is a curse on Bluestone Manor for these ladies?” Dorinda laughs and says “No. They just don’t know how to act.” Andy tells her “I have to say I found your monologue in the kitchen to be gripping.” One of the viewers asks LuAnn “Did you find yourself as self- absorbed as we all did when Jules was trying to talk to you about her dad.” Andy then asks Bethenny about her name calling LuAnn. Bethenny tells him “LuAnn slept with a  married man.” LuAnn demands to know who the married man is. Bethenny tells her “The guy from Kinkos.” LuAnn quickly pipes up and tells her “He was married and cried on my shoulder all night because he was getting separated. “ She then fires back at Bethenny and tells her “You are dating a married man, so the biggest hypocrite in this room is Bethenny.”

The argument rages on and LuAnn says “Give me the name of the married man that I slept with.” Bethenny says “You have slept with every man in Manhattan. How am I supposed to know?” Andy tries to get to the bottom of the whole story, but while Bethenny is talking LuAnn continues to speak in an undertone. Finally, Bethenny tells her “You have never been out with a man you have not had sex with.”

Andy asks Bethenny about her issues of screaming and then feeling contrition. Bethenny says “I do feel bad about it. I think when I was screaming at her it was a build up of the last eight years.” LuAnn calls Bethenny a hypocrite and  once again accuses her of dating a married man. Bethenny pulls out her phone and Andy asks her “Who are you calling?” She says “My boyfriend’s daughter.” LuAnn says “I don’t want to talk to your boyfriend’s daughter.”

Bethenny says “You won’t be talking. You’ll be listening.” The young lady tells them “Unless my dad was sneaking you in the back door there was nothing going on with you a year ago because he had surgery. You are not a homewrecker. You are just a really nice person and I hope to see you soon.”  All of the ladies erupt calling LuAnn a liar. They tell her “Clearly the girl would defend her mother and if she thought that Bethenny had been doing something behind her mother’s back she would have said so. You are such a liar.” LuAnn tells Bethenny “You are a hypocrite and a terrible person.”