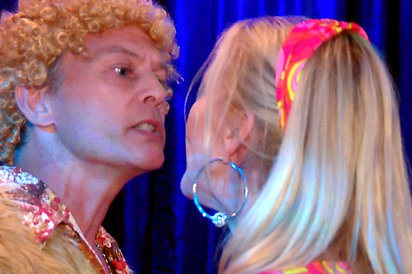 Tonight on Bravo The Real Housewives of Orange County airs with an all new Monday, July 25, season 11 episode 5 called, “Boogie Fights,” and we have your The Real Housewives of Orange County recap below. On tonight’s episode at Shannon Beador’s 70’s-themed party, disco fever takes on a whole new meaning when Shannon gets into a heated argument with Kelly Dodd about her rumor-filled past.

On the last episode, as Kelly’s beach party moved indoors, Vicki and Shannon had a chilly face-off about the fate of their friendship. Did you watch the last episode? We’ve got your The Real Housewives of Orange County recap right here for you.

On tonight’s episode per the Bravo synopsis “at Shannon’s 70’s-themed party, disco fever takes on a whole new meaning when Shannon gets into a heated argument with Kelly about her rumor-filled past. While Vicki juggles work, babysitting her grandsons and nursing Briana back to health, she still finds time to “whoop it up” with the ladies, at least the ones who are speaking to her.

Heather confronts Terry about his lazy parenting after he schedules a work trip for Mother’s Day. With Jimmy out-of-town again, Meghan looks for support from her friends during her IVF treatments. Tamra tries to help Kelly mend fences, but winds up stirring the pot instead.”

On this week’s episode of Real Housewives of Orange County Shannon, David and the children are out shopping for her upcoming seventies party. While they are in the store Adaline asks her dad “How many times have you had wet dreams in your life?” David laughs and tells her “I don’t know. Too many to count. “ Shannon says  “You know if our kids are close enough to ask their dad about wet dreams we are a close family.”

Kelly and Tamra are out shopping for outfits for Shannon’s party.  Kelly asks her “Have you ever had an issue with Shannon?” Tamra tells her “Yes, I have and I apologized and she forgave me.” Kelly says “It seems like she is a bit judgemental. She should forgive Vicki.” Tamra tells her “I think she has forgiven her. I just don’t think she wants to continue the friendship.”

Heather is helping Meghan with her hormone injections. Meghan says “My stomach hurts and I just don’t feel like injecting myself today.” Heather is not happy when she checks  Terry’s schedule and finds out that he is leaving again on Mother’s Day. She tells him “Mother’s Day is not only important to me, but it is important to our four kids.” Terry tells her “I will see if I can get them to change it.”

Vicki is watching her grandsons while Breanna injects her medicine into her arm. One of the boys wanted to go upstairs with his mom and Vicki tells him “Mommy is taking her medicine so she needs to be alone.” Breanna says “My mom hasn’t watched toddlers in 25 years, but the kids are alive and they’re clean so I”m happy.”

Kelly is spending the day with her daughter. She takes her to the day spa where the two indulge in pedicures and then they are going to a Justin Beiber concert. She says “I want my children to know that God matters above material things. That’s why I sent them to Catholic school.”

Everyone begins arriving for Shannon’s seventies party. Tamra and Eddie and Meghan and her mom arrive. Vicki also decides to show up. She says “I’m hopeful that we can all hug it out and move on.”  At the door Shannon greets a woman named Jaci that she ran into Michael with while they were separated.  Heather and Vicki are having a drink. Heather says “I am no longer going to be Vicki’s judge and jury. If she lied God will judge her.”

Terry and Heather are having a serious conversation. Heather tells him “You are always on the go. You are always traveling and it keeps you away from your family.” Terry says “I don’t mean to neglect my family.”

Meanwhile, Tamra is sitting down talking to Jaci trying to figure out how she knows Kelly. tells her “I got this sob story about how the girl had just broken up with her boyfriend.” As they  talking Kelly and Vicki walk by looking for Vicki’s purse and overhear the conversation.  Kelly immediately stops to confront them. Shannon jumps up and throws Kelly out of the party. David begins to insult Vicki. He calls her “a scumbag and the lowest of the low.” Vicki fires back and says “No wonder you cheated on your wife.” Shannon fires back at Kelly and accuses her of having an affair with one of her old neighbors. Kelly’s husband escorts both her and Vicki from the party and when they are in the limo Vicki calls Brooks and leaves a voicemail telling him about what happened and that he needs to call David and straighten it out.

Shannon and Tamra decide that in order to help recover from the madness that just happened they need to dress up as seventies strippers. Vicki, Michael and Shannon all feel that Shannon’s friends set her up…