The Real Housewives of Orange County Recap 8/1/16: Season 11 Episode 6 “Frenemies of the State” 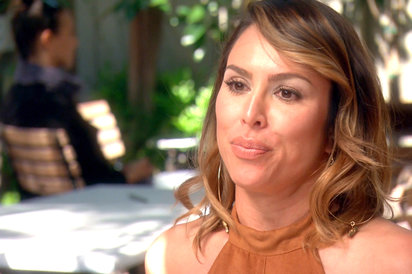 Tonight on Bravo The Real Housewives of Orange County airs with an all new Monday, August 1, season 11 episode 6 called, “Frenemies of the State,” and we have your The Real Housewives of Orange County recap below. On tonight’s episode, in the wake of all hell breaking loose at Shannon Beador’s 70’s party, Shannon heads to Dr. Moon to try a new remedy to remove toxins.

On the last episode, at Shannon’s 70’s-themed party, disco fever took on a whole new meaning when Shannon got into a heated argument with Kelly about her rumor-filled past. Did you watch the last episode? We’ve got your detailed The Real Housewives of Orange County recap right here.

On tonight’s episode per the Bravo synopsis “in the wake of all hell breaking loose at Shannon’s 70’s party, Shannon heads to Dr. Moon to try a new remedy to remove toxins. Kelly tries to make amends by inviting Shannon to sit down and rehash the night. Meanwhile, Meghan travels to Washington, D.C., with Heather by her side, to speak on behalf of colorectal cancer. Tamra explores custom bikinis for her fitness competition and Vicki tours Briana’s new house in the midst of renovations.”

Tonight’s episode is going to be filled with more crazy housewife drama that you won’t want to miss, so be sure to tune in for our live coverage of the show tonight at 10 PM EST! While you wait for our The Real Housewives of Orange County recap hit the comments and let us know how excited you are about this episode of The Real Housewives of Orange County! How do you think this eleventh season is going to play out?

This week on Real Housewives of OC Meghan is at the Drs office preparing to have her eggs retrieved. She says “I’m glad that my mom is with me, but I am not happy that Jim is not here to be part of this. He has no idea how important this is.” The Dr. walks her mom through the egg retrieval process and when it is over Meghan is moved to the recovery room. She tells Dr, Potter “I met your wife last night.” He says “My ex-wife.” Meghan laughs and says “She has quite a mouth on her.”

Vicki is at work and Tamra stops by. They start talking about Shannon’s seventies party. Tamra says “Kelly went cuckoo, Shannon went cuckoo and then cuckoo met cuckoo.” Shannon and David are also talking about the party. Shannon says “I walked into that room to get you.” Shannon says “I saw red and I stooped to Kelly’s level. That’s not who I am.” Michael tells Kelly “Shannon thinks she has something on us, but she doesn’t. We are an open book.”

Meghan and Heather are heading to Washington to speak on Capitol Hill to help raise funding for screening for Colon Cancer. Meghan says “I am speaking and doing this so that my friend Leanne can look down and be proud.” Heather asks Meghan how the retrieval went. She tells her “They fertilized ten eggs. Maybe we’ll end up with twins.” Heather laughs and says “Twins are a lot.”

Shannon goes to the Dr. to get have a procedure called “Cupping” done. This procedure allows for all of the toxins out of my body and keep me healthy and after all of the stress of my seventies party I desperately need this.”

Heather and Meghan are in Washington having dinner. Heather asks Meghan whether or not Jim will be there when the eggs are implanted. Meghan says “No, My mom will.” Heather tells her “I understand how it is to have a husband who is super busy and not involved with the kids.” Meghan says “Jim has done this four times before and while he wasn’t there for the before stuff he was definitely there for the hands-on stuff when it came to his kids. If I have to sacrifice him being here now to have him here once they are born I am willing to do that.”

Kelly and Michael are having dinner with her mom. She tells her about the situation with Shannon. Her mom tells her “You have to consider that she has a lot going on with her husband and her kids. Maybe you should give her another chance.” Michael chimes in and asks her “You guys share a lot of friends in common right?” Kelly says “Yes.” Both of them tell her “You have to forgive her.”

Tamra and her trainer are working on her performance for her bodybuilding show. They are talking about her outfit for the show. Mia tells her “This is the OC. You have to wear something cute and sexy.” They then begin to work on Tamra’s walk in heels. Tamra says “I am not the type of girl to walk across the stage in heels and wow the judges. Mia is really helping me to become a better person and discover more about myself.”

Meghan stands up and delivers a very moving speech to congress. She talks about her friend LeeAnne and how much of a fighter she was. She also tells them what a shock it was when she died so suddenly. She becomes choked up. She says “I can feel Leeanne’s spirit looking down on me and I know she is proud of me right now.” She concludes her speech by saying “I am here because we are all fighters and we shouldn’t give up and let this disease win.” Everyone applauds her.

Vicki shows up at Brianna’s new house. Vicki says “The best thing about my break up with Brooks is that Brianna is back. If I had stayed with him Brianna would have never moved back.” They are looking at the downstairs and trying to figure out how to make renovations. Tamra shows up to take a look. While they are looking around Tamra asks Brianna how she is doing. Brianna tells her that she is doing better. Meanwhile, Brianna’s son Troy runs off with Vicki’s keys and locks himself in the car. They are all trying to get him to open the door and he is refusing to do it. Brianna says “He’s my little stinker. He is so much like Ryan.” Tamra laughs and says “I raised four kids, but Brianna is raising two little boys….. and Vicki.”

Determined to make amends Kelly reaches out to Shannon. She invites her out for coffee. Shannon is reluctant but accepts the invitation.

Tamra calls Heather and Meghan while they are in Washington. Meghan tells her about the moment that they shared at Shannon’s party when she was not feeling well. Meghan agrees that they should all get together but she worries that Kelly and Shannon will not get along. Tamra tells her that the two women are meeting up to try and work out their differences. Meghan then reveals that while she was standing with her mom she heard Shannon ask the two women to come into the back room with her. This surprises both Tamra and Heather. Tamra says “There is more to this than meets the eye.”

When Shannon and Kelly meet up the meeting imeadiately goes south. Kelly tells her “I think that you knew that I knew her and that you set me up.” Shannon gets very upset and tells Kelly “I thought i was coming here to help you. I thought this was an apology. This feels more like a set up.” Kelly is still trying to make her point. She tells her “I feel like you set me up.” Shannon says “You said rude things about two thirds of my guests and then mentioned that my husband had an affair on me. Who does that? I do not have parties to stir up messiness or create problems.” Shannon says “You’re calling me a liar right now.” Kelly says “You are a liar right now.” Kelly also tells her “I just want to move on from this. Let”s just move on from this.” Shannon says “I’ve only seen you four times and each time it’s a different Kelly.” Kelly says “Let’s just move on. I just can’t deal with negativity.” Shannon says “Neither can I. That’s why I cut it out of my life when I see it coming.”