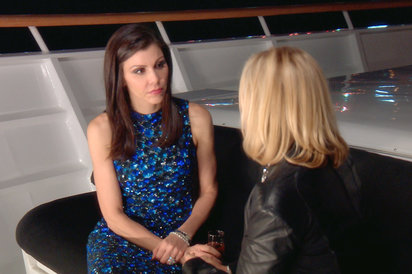 On the last The Real Housewives Of Orange County (RHOC) recap, in the season finale, the ladies gathered together to witness Tamra’s baptism, but with the constant questions and confusion surrounding Brooks’ cancer, Vicki was the one who felt crucified. Did you watch the last episode?  We did and we recapped it right here for you.

On tonight’s episode per the Bravo synopsis “tensions run high at a boat party; Vicki fights to win the women back after a year of lies; Meghan starts in vitro fertilization with no help from husband Jimmy; new housewife Kelly Dodd’s loud mouth gets her in big trouble.”

Tonight’s episode is going to be filled with more crazy housewife drama that you won’t want to miss, so be sure to tune in for our live coverage of the show tonight at 9 PM EST! While you wait for our recap hit the comments and let us know how excited you are about this episode of The Real Housewives of Orange County recap (RHOC) ! How do you think this eleventh season is going to play out?

On the season premiere of The Real Housewives of the OC Tamra is worried about her body so she has hired a personal trainer to help her prepare for a fitness competition to help her fight off menopause. Her trainer tells her “You’re gonna do a T walk.” As she is demonstrating the walk Eddie walks in and says “You call that working out?” Tamta laughs and Eddie says “You need to practice that before we go to bed.”

Meghan and Jim are moving into their new house. Meghan says “This is the first house that we have lived in that feels like we live in it together and not one of the houses that Jim owned and lived in with his ex wife.” Meghan begin talking to Jim about them having a baby. Meghan says “Jim had a vasectomy but he froze some sperm and thank God he did.” He tells her “Don’t count your eggs before they hatch and they both laugh.

Heather is worried about her boat party on Wednsday. Terry comes home from working and the kids are excited. Heather tells him “I have a plan for the party. I plan to offer a toast and talk about second chances.” Terry asks “Who all is going to be there?” Heather says “I invited Meghan and David, Tamra and Eddie and Shannon and David.”

Vicki is feeling really lonely since Brooks moved out. She says “I have never been without a relationship. The night Brooks left I literally laid in the street and begged him not to go. I wasn’t part of any Cancer scam. My relationship with Brooks cost me a lot and nearly cost me all of my friendships. I want to whoop it up again. Although I wasn’t pat of a Cancer scam, If I had it to do all over again I would defend my man.”

Shannon is thrilled that Brooks has finally been exposed as a liar. She says “I am looking for accountability from Vicki. I want her to say I didn’t want to be part of the whole scam, but I got in to deep.”

Shannon is making dinner for her husband David. She says “Since last year I think David have come to the most positive place we can be. Tina has said it takes two years to get over an affair. Two years is coming up and I am nearly over it.” The family is sitting around talking and Shannon tells her 11 year old “When a boy sends you something whose phone do you think it goes to?” She says “Dad’s.” Shannon says “We both see it and you need to not be thinking about dating at 11.”

Meghan is heading to the Drs. to have am IVF procedure with her mom. Meghan asks her “Do you remember this procedure?” Her mom says “If I remember it then it wasn’t a good thing.” The Dr. tells her “We are going to be doing a hyscoroscopy where we insert a tube and look around.” The nurse comes in to start the IV. Once this is done they go ahead with the procedure. and it is determined that everything is normal except for the fact that her uterous and cervix are C shaped. Shannon says “I never knew they came in shapes.” After the procedure is done she asks her mom “Do you think I was being overly dramatic?” Her mom says “No.”

Heather meets up with Tamra to go shopping for trees and landscaping for the house. Heather talks with Tamra about her party. She says “Have you talked with her?” Tamra says “I haven’t seen her in months. Occasionally she will send me a text, but it’s always about how we wronged her and she’s the victim.” Heather asks her “Do you think Shannon will be mad if I invite her?” Tamra says “Yes.”

Meghan is hanging out with her friend Kelly for a drink. She tells her “Jimmy is gone away for spring training. He is coaching and broadcasting for the Cardinals.” Heather says “I am glad that you are happy.” Meghan invites Kelly to go with her to Heather’s yacht party. Kelly is excited to go.

Vicki is getting ready to go to Oregon to help Brianna move back to Orange County. She calls her daughter and asks her “Do you think I should fly out on the red eye and we start driving that day?” Brianna says “Yes. I think it would be better that way. Otherwise you would have to go right to work.” Vicki is excited to see her daughter and grandson. After she hangs up with Brianna her phone rings again and it is Heather. She tells Vicki “I am putting together a little love cruise and I wanted to know if you wanted to come?” Vicki says “I don’t really have any love in my life, but yes I would love to come.” Heather thanks her and hangs up.

Shannon is getting a facial tightening treatment. Tamra is with her. Shannon says “Who would have thought that I would ever say Tamra is one of my better friends.” Tamra says “It’s nice to have a friend like Shannon after Vicki screwed me.” Shannon and Tamra are talking about the situation with Vicki. Tamra says “Do you think it would be possible to have a conversation with Vicki and if she could admit what she did we could forgive her?” Shannon says “No. You should never lie about having Cancer.”

Kelly is at home with her family and her husband Michael. She tells him “She told me someone was being mean to her at school.” Kelly tells her daughter “If someone is being mean to you be mean back to them and they will never be mean to you again.” The family is sitting around having dinner and drinks. Kelly asks her daughter “Do you want uncle Erick to get married?” She tells her mother “He’ll never get married because he can’t settle down with just one woman.” Erick says “Setteling down with one woman at my age is like leaving the best party ever at 9:30.” Kelly talks about how greatful she is to have her family.

On the night of the Yacht party Heather is decorating the boat. At Vicki’s house her friend Jenna arrives to go to the party together. Gina says “Here is to 2016 and finding new love.” Vicki says “It will take me a long time to date again. I don’t trust anybody and I suspect that everyone has an ulterior motive.”

The ladies are arriving for the party. Everyone is impressed by the boat. Kelly and Tamra arrive and Shannon makes an immediate impression on the girls. Vicki and Gina arrive at the party and when Vicki tries to greet the other women they are a bit frosty. Shannon says “There is nothing Vicki can say to restore our friendship. I don’t even care that she lied about Cancer.” Kelly and Vicki meet up for the first time. Vicki says “Kelly is fun and I like that rather than being around someone like Shannon who is sitting there hating the world.” Heather gets everyone upstairs for dinner. Shannon pulls Kelly aside and asks her “How was talking to Vicki?” Kelly says “She seemed like a nice person.” Shannon says “Yeah well just be careful.” Kelly tells her “I am not here to judge.”

At dinner Heather reveals that Terry had a stress echo and it was positive. She expresses how worried she was that Terry would have to have bypass surgery. Thankfully a second test revealed that the first test gave them a false positive. Vicki pulls Heather aside and apologizes to her and begs for her forgiveness. She tells her “I was trying to hang on to something that was slipping away.”