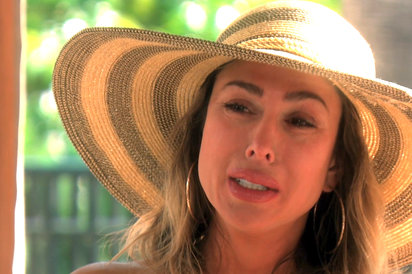 Tonight on Bravo TV the original housewife series, The Real Housewives of Orange County returns with an all-new Monday, September 26, 2016, episode and we have your RHOC recap below.  On tonight’s season 11 episode 13 called, “Bye, Bye, Beadors,” Shannon Dubrow bids adieu to her old home; and Tamra Judge hosts a day of indulgence and luxury at a spa, but dramas bubble up and surround a tearful Kelly Dodd.

Did you watch last week’s episode where friends and family gather to watch the Beador girls perform, but Shannon’s night is rocked by a shocking allegation from an uninvited guest  If you missed it and want to get caught up we have last week’s Real Housewives of Orange County recap, right here for you!

On tonight’s RHOC episode as per the Bravo TV synopsis, “Michael and Kelly Dodd discuss the ups and downs of their relationship since separating, while Meghan King Edmonds goes to her first ultrasound appointment. Vicki Gunvalson gets asked to film a commercial for a cancer charity. Shannon Beador  packs up her old home and gives it a heartfelt “goodbye” while Tamra Judge hosts Kelly, Vicki, and Heather Dubrow for a day of pampering and luxury at Glen Ivy Spa. Unfortunately, things at the spa aren’t as tranquil as expected when Kelly tearfully opens up about her rocky marriage.”

On this week’s episode of Real Housewives of Orange County, Shannon is still upset over the confrontation that occurred with David’s mother and sister. She says, “I know that David’s mother wanted him to leave me for his affair, and that still hurts.” They are also still packing to move from their house. She hasn’t made much progress and is still frustrated with the fact that her rental is not up to her standards. Shannon tells David “Kelly Dodd will be our new neighbor.” She is not happy about this either.

Eddie and Tamra are out having lunch. Eddie tells her, “Babe have a glass of Sake. You need to relax.” Tamra tells him, “I shouldn’t be drinking this. I’m preparing for my competition.” Eddie laughs and he tells her, “You need to relax.” They each enjoy a shot. Tamra tells Eddie “I am taking the ladies to the spa this weekend.” Eddie tells her, “You don’t need to be around them. Every time you are you get stressed out.” Tamra tells him, “It’s just me, Heather, Vicki and Kelly. Meghan is pregnant and Shannon is moving.” Eddie laughs and Tamra tells him “I can’t have another shot, but if you do you might get lucky.” Eddie quickly calls for the check.

Michael is outside in the garage working and Kelly goes outside to hand him a beer. She tells him “I told my friend who is getting a divorce to use your lawyer because my lawyer sucked.”

Kelly looks at the project he is working on and asks, “Are you going to tape that?” Michael is frustrated because Kelly is nagging him. He tells her, “If you tell me to tape it I will.” Kelly then asks him “Do you think our marriage is better now that you are home all the time?” Michael says “Yes.” Kelly says, “I think you nag a bit.” Michael gets upset and tells her, “I don’t nag.”

Vicki decides to rehabilitate herself by starting a foundation to help Cancer patients get insurance to fund their treatment. They meet with people to help start the foundation. One of them asks Vicki about the Brooks incident last year. Vicki recounts the incident. Her son Andrew asks, “You weren’t ever in the room with him when he had the treatments?” Vicki says, “No. I was in the waiting room, but I never went back there while he was having his treatment.” The man tells her “ Everyone makes mistakes. It’s how you recover from them that matters. If you do something like this to help people then maybe the people you hurt will forget about the Cancer scam.”

Kelly is talking with her mom about marriage. She asks, “I know you stayed married for us kids right?” Her mom tells her “Partly. Mostly it was because I didn’t want anyone else telling you guys what to do.” Kelly tells her “Michael and I are not happy and I don’t want Jolie growing up and thinking that it is ok for men to treat women that way.” She also tells her, “I stay with Michael because I don’t want him to take her away from me.” Her mom tells her, “In three years Jolie will be13 and can decide for herself.”

The ladies finally get their trip to the spa. Heather says, “Now this is one of Tamra’s trips that I can get behind. No roll bar, no helmets. Just rest and relaxation.” While they are sitting down enjoying the sunshine, Tamra tells them, “I had never met David’s mother, but she starts telling me all of this personal stuff.”

Tamra goes on to reveal to them how David’s mom wanted him to leave Shannon for the other woman. The other ladies are shocked. Vicki says, “No wonder Shannon is so hurt. No one cheats because they have a happy marriage.” Tamra tells them “David’s mistress had dinner with their family.” This further shocks the family.

The ladies are continuing to enjoy their spa day. Vicki and Kelly are getting massages and talking about Kelly’s marriage. Kelly is really upset. While they are talking Heather and Tamra overhear them. Tamra is upset and she says, “Hearing what Kelly is going through with Michael and knowing what I went through with Simon makes me so happy that I have Eddie.”

Later on, the ladies are talking and Tamra asks what all the yelling was about. Kelly tells them what happened on her anniversary and how Michael spoke to her. Tamra and Heather are appalled. Kelly says, “My mother went through the same thing. My dad never spoke to her like that.” Heather says, “What does your mom say?” Kelly says “My mom says to get a divorce.”

Shannon and David are having dinner. She tells him, “I haven’t cooked dinner in over a week.” David tells her, “I know this has been a really difficult move for you. It has been a really difficult move for me too.” David then brings up his mother’s actions. He tells her “I think my mother blames herself for my father’s choice to leave.” David says, “I told my mom in a text the next morning that if she can’t respect you then I can’t have her around my family.” Shannon seems happy to hear this.