‘The Vampire Diaries’ Paul Wesley and ‘The Originals’ Phoebe Tonkin Headed for Split – No PDA on Day Out? (PHOTOS) 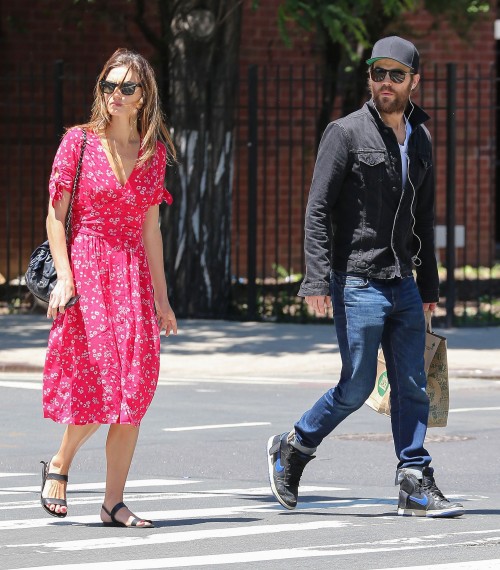 Paul Wesley (Stefan, ‘The Vampire Diaries’) and Phoebe Tonkin (Hayley, ‘The Originals’) may be headed for split.  The usually-affectionate couple had a chilly vibe in the air when they were seen out and about together in New York City this week.

The duo usually hold hands while they hang out – but when The CW actors were out in New York’s East Village yesterday, they were standing apart, unsmiling, and seemed to be in a serious conversation as they stopped for a quick snack.

Are Paul Wesley and Phoebe Tonkin breaking up? Or does the lack of PDA just indicate a disagreement rather than a relationship-ender? At one point in their walk, Paul Wesley seems to have tuned his girlfriend out completely.

The usually clean cut, but now scruffily-bearded Wesley popped in ear buds and focused on his phone instead of his gal pal. A few weeks ago, the vampire-portraying actors showed major affection on the red carpet at a PR event for The CW.

But was that lovey dovey act just an effort to promote their ratings-troubled shows ‘The Vampire Diaries’ and ‘The Originals’?

Also, the couple have posted fewer Instagram pics of each other in recent days when usually they are more affectionate on social media as well. Is this a sign of bad things to come for the couple?

Will Phoebe and Paul announce a split once PR for their fall show premieres is done? Paul Wesley has been off doing Walker Stalker Con in various locations which also feature ‘The Vampire Diaries’ Damon and Stefan Salvatore portrayers Wesley and Ian Somerhalder.

Plus, Phoebe Tonkin has been out and about at NYC shindigs without her honey. Are they hanging out independent of each other because of an impending break-up or is it work commitments keeping them apart?

Last week alone, Phoebe showed at the Veuve Clicquot Polo Classic and a CHANEL event at a NY Public Library without her beau. Has Paul Wesley tired of Phoebe Tonkin?

You’ll recall that she was his rebound as he was splitting from wife Torrey DeVitto (Melissa, Pretty Little Liars). Meeting Phoebe may have even spurred Paul to end his marriage to Torrey that was complicated by hectic bi-coastal work schedules.

What do you think fans of ‘The Vampire Diaries’ and ‘The Originals’? Has the spark gone out of the romance between Phoebe Tonkin and Paul Wesley? Has the rebound romance finally fallen flat after three years?

Share your comments below and check back with CDL often for more ‘The Originals’ and ‘The Vampire Diaries’ spoilers and news.