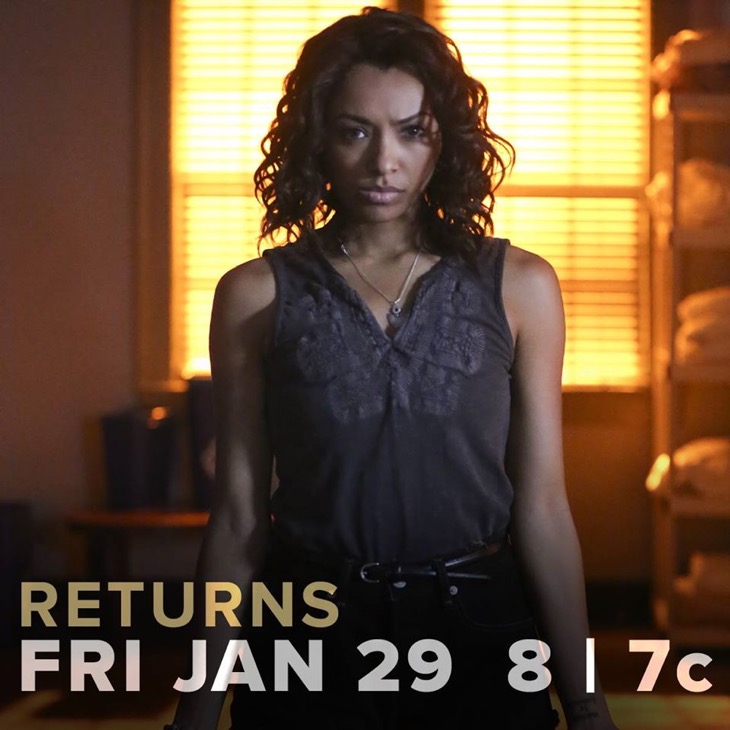 Tonight on the CW The Vampire Diaries starring Nina Dobrev, Ian Somerhalder and Paul Wesley continues with an all new Friday January 29, season 7 winter premiere called “Hell Is Other People,” and we have your weekly recap and spoilers below. On tonight’s episode, Damon (Ian Somerhalder) becomes trapped inside the Phoenix stone and is tormented by a traumatic experience from his time in the Civil War. He is forced to face his darkest demon in order to get out.

On the last episode, with the holidays in full swing, a search for Julian lead Damon and Stefan to a small town outside of Mystic Falls. While managing a holiday toy drive at Whitmore College, Bonnie (Kat Graham) seek help from Nora (guest star Scarlett Byrne) and the two striked up an unlikely friendship. Elsewhere, Caroline (Candice King) did her best to navigate her new life as a pregnant vampire, while Alaric (Matt Davis) grew concerned that the pregnancy was effecting her more than she’s letting on. Finally, after finding himself at odds with Damon, Stefan was forced to take matters into his own hands, setting off a tragic chain of events that left their lives changed forever. Did you watch the last episode? If you missed it, we recapped it all right here for you.

On tonight’s episode as per the CW synopsis, “after finding himself on the wrong end of Julian’s (guest star Todd Lasance) plan to avenge Lily’s (guest star Annie Wersching) death, Damon (Ian Somerhalder) awakens to find himself trapped inside the Phoenix stone, tormented by a traumatic experience from his time in the Civil War and forced to face his darkest demon in order to get out. On the outside, Bonnie (Kat Graham) is in a race against the clock to get Damon out before the effects of the Phoenix stone take over and leave him changed forever.”

You’re not going to want to miss any of the action tonight, so tune in at 8PM EST to the CW to catch the latest. We’ll be live recapping the season 7 episode 10 for you right here and in the meantime, hit up our comments section and tell us your thoughts on this new season!

#TheVampireDiaries starts with Damon in 1863 in the midst of a Civil War battle. He’s bloody ad out of sorts. Lily is there and asks if he had a nice nap. Then a bomb goes off and a guy begs Damon to help him. His mother is gone.

Damon rolls the canon off the guy’s leg and helps him up. Damon comes to again with reveille playing and the guy calling him a hero. It’s mail call and Damon has a letter. It’s from Stefan who says Valerie left him and his father is a drunken wastrel.

Stefan says he wishes he was there with him. Damon walks through the camp and sees the gore of the war. He goes to his commander and asks for leave to go home. He says his brother needs him desperately. Damon says he’ll do anything.

The colonel says he has a mission and says there’s a farmhouse 12 miles away with deserters hiding out. Damon agrees to take it on and thanks him. Damon walks with Henry and talks about the mission to recapture them.

Henry says these deserters are just like them but Damon says they are his ticket home. Damon knocks at the farmhouse and asks the woman if she has food for two hungry soldiers. She says no but he says quartering is the law. She has to let them in.

He talks to the women and looks around. One of the deserters comes out of the pantry with a gun out. He tells Damon to put his gun down. The man says they just want to go home. Henry creeps closer from the other room.

Damon tells him the problem is he wants to go home too. A shoot out breaks out and the women are shot as well as the deserters. Henry asks what they’ve done and Damon tells him to wait. Damon asks the other deserter to lay down his weapon. It’s Lily.

She comes out and smiles at him. He says she died of consumption and they buried her. She says she’s dead and he saw to it. He says he was there when she died. He says this makes no sense. She asks if it’s coming back to him.

She tells him his spirit is in the Phoenix Stone. She looks around and asks if this really happened. He says it was 1863 and he was trying to get home to Stefan. She asks if he took responsibility for this and says he and Henry covered it up.

He asks how she knows and says they ambushed them and says he didn’t come to kill anyone. She tells him this is about punishment. He gasps awake and finds Bonnie worked the spell to bring him back to his body.

He says he was young Damon for a day and Bonnie says he’s been dead for three months. He’s stunned. She tells him Matt’s on patrol, Caroline’s in class and Alaric is lecturing. He asks about Stefan and she says he needs to have a drink.

Stefan is still stuck in the stone and Bonnie says it took all her magic to pull him out but he says you have to do it now. He goes upstairs to Stefan’s room and he asks where he was. Bonnie says he was just here.

She sees a note that says – are you up for a barbecue. They call Matt and Caroline says if Julian scorches Stefan, they can’t bring him back ever. Damon wants her to use a locator spell but Bonnie’s magic reserves are low.

Caroline tells Damon he only sees what he wants. Damon wonders why the phoenix stone sent him his mom. She says the longer you are trapped, the less humanity you have. She says they figured he was most likely to be a psycho.

Damon shows up to where Bonnie said Julian is and sure enough, he’s there. Stefan’s body is soaked in gasoline and lying on the bar. Damon sits down with Julian and he says he never got to share war stories with another stone survivor.

Damon says they can talk once his brother is back. Julian says he woke up in that world and saw Lily. He says he killed her every day for a century and had his heart torn from his chest. He says it was misery.

Damon says he had a different experience and gives it one star for horror. Julian throws his lighter onto Damon and says he just resisted the pain. Lily is there and says it’s too late. Damon says it’s not real and she says the pain is.

She says once he figures that out, he’ll be one step closer. He wakes in the tent back in 1863 to Henry sitting by him. He tells him he’s been out a long time.