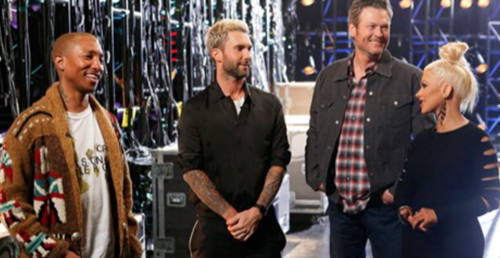 Tonight on NBC the Emmy award winning music competition The Voice continues with an all new Monday March 28, season 10 episode 9 called, “The Knockouts Premiere,” and we have your weekly recap below. On tonight’s episode the knockout round kicks off with the artists selecting their own song to perform. Miley Cyrus serves as the key adviser.

On the last episode, the “battle rounds” had it’s last round and the coaches enlisted the help of the music industry’s top recording artists to offer their knowledge and skills as advisors. Did you watch the last episode? If you missed it we have you covered with a full and detailed recap right here for you.

On tonight’s episode as per the NBC synopsis, “the “knockout rounds” begin with coaches Christina Aguilera, Adam Levine, Blake Shelton and Pharrell Williams’ strongest team members remaining from the battle rounds. The artists will be paired against a teammate once more, but this time they will each select their own song to perform individually, while their direct competitor watches and waits.

Music phenomenon Miley Cyrus will serve as a key adviser and be on hand to work with all of the coaches and their teams as they prepare the artists for this challenge. The coaches alone will choose the winner from their team to move on to the live shows and the artist not selected will be available to be stolen by another coach.”

Tonight’s season 10 episode 9 is going to be exciting. We’ll be blogging it right here for you. In the meantime hit up the comments section and tell us your thoughts on season 10 of The Voice so far.

#VoiceKnockouts has Miley Cyrus as guest mentor and the artists will choose their own songs. This is the last barrier before they make it to the live shows of Season 10 of The Voice. Each coach has one steal in this round of the competition.

Blake says he’s glad Miley is there and says she’s in every genre of music. First up is a Team Blake knockout of Angie Keilhauer vs Paxton Ingram. Paxton has chosen Hometown Glory by Adele. He’s from Miami and likes the anthem to the hometown idea. He’s thrilled to have Miley as his advisor.

Angie is up next and she’s chosen Take Your Time by Sam Hunt. She says she changed it up so it’s less talking and more melodic. Miley helps her convert the song to make it her own. They agree they have it as it should be. Angie is up first and performs her different version of the Sam Hunt song.

Hers was funky but interesting. Now Paxton gets his turn. Christina says Angie has such confidence and Paxton showed a lot of emotion. She says she loved his low tone. Pharrell says the song didn’t show off her potential but still likes her. He says Paxton’s low notes are great. He says Paxton won it.

Adam says Angie is special and passionate and says Paxton’s voice sounds like no one else. Blake says he hates this and says Angie is up for a challenge and never makes an easy choice. Blake decides the winner is Paxton. That’s the first result from #MileyOnTheVoice.

Next is a Team Adam knockout of Owen Danoff vs Ryan Quinn. Owen has chosen She’s Always a Woman by Billy Joel. Miley gives him some notes and so does Adam. Ryan has chosen Train’s Drops of Jupiter. This should be epic.

Now it’s knockout performance time and Owen goes first. He does a great job. Then it’s Ryan’s turn. Blake says Adam was dumb to put two of his four chair turns against each other. Blake says he thinks Owen was more invested in his song. Christina says Ryan lost his way in the song.

Christina says Owen hit an amazing note. Pharrell says Ryan did well but not as good as he’s done before and Owen just brought them all to a special place and gives it to Owen too. Adam says they’re opposites in a lot of ways and hears Owen question himself and has puzzles to solve with them.

Adam says he can reward reliability in Ryan or what’s special in Owen. Adam decides to go with Owen who is shocked. Ryan is up for steal and Christina slaps her button and Ryan is floored. She says she’s been a fan of his since the blinds and is excited.

Now is a Team Pharrell knockout of Hannah Huston vs Malik Heard. He says he wants to see how their soul styles face off. Malik is doing Stevie Wonder’s Isn’t She Lovely. Miley encourages him to be less reserved.

Hannah is doing House of The Rising Sun by The Animals. Miley gives her a bunch of notes about not holding back. She gives Miley goose bumps. Now it’s knockouts time and Hannah goes first. She absolutely tears the song up.

Adam is blown away and he and Blake share a look. The crowd goes wild. Blake and Pharrell are on their feet. Malik is next with his Stevie Wonder song. He did a great job but Hannah was the clear victor. Adam says Hannah was bonkers and brought the house down.

Blake says Hannah was incredible and says Malik sang his heart out. Christina says Hannah made impressive choices and says she loves Malik. Pharrell says Hannah’s performance could not have been better. He compliments Malik’s energy but gives the knockout to Hannah.

Next is Team Blake knockout of Katie Basden vs Lacy Mandigo and they are both steals he took from other coaches. Lacy has chosen Zombie by The Cranberries. Miley says she likes her edge. Blake says there’s no one like her on the show.

Katie is doing Gypsy by Fleetwood Mac. She says it’s a favorite of hers growing up. Miley says she got chill and likes the version. Christina says she likes Katie’s song choice and says it was clean then she says Lacy rocking out was awesome and liked the charisma.

Pharrell says Katie had sweet spots that showed off her voice and he would give it to Katie. But then he says Lacy is amazing and has the tools in the shed. Adam says Katie is incredible and Lacy has a lots to show them.

Adam says he can’t let it happen. Pharrell says he’s got a couple of things to work on and can take her to the end. Adam says he loves Pharrell and it hurts him to say this but she needs to think about the fact that Pharrell would rather have Katie than her on his team. Lacy goes with Pharrell.

Next is a Team Christa knockout of Alisan Porter vs Daniel Passino. Alisan meets Miley and says she’s doing River by Joni Mitchell. Miley says her effortlessness is incredible and she’s radical. Where does Miley get these clothes? Seriously…

Daniel is doing Ain’t Too Proud to Beg by The Temptations. He hopes to do top 40 pop songs. Christina gives him pitch notes and Miley offers notes and says you can’t make it the same as the record when you sing classics but also can’t mess with them too much. Alisan is up first and slays it completely.

Daniel goes next and he throws in some cool dance moves. Pharrell says Daniel has huge ambition and fought well and slayed it. He says Alisan’s performance was masterful. Adam says Daniel is impressive and has a lot more confidence then says Alisan is something special.

Blake says Alisan did what she does and Daniel reacted by swinging for the fence. He says they both sing well but Alisan connected on an emotional level. Christina says Alisan is a gift to the show and knows how to use her instrument. She says Daniel really put his heart out there.

She says Daniel is dedicated and talented. Christina says she has a lot of respect for both of them but gives the knockout to Alisan. Daniel says he can’t even talk right now and Christina says she loves him so much. Pharrell tells him he would have used a steal on him but he didn’t have one.

Next is Team Pharrell and his next knockout is Emily Kenner vs Shalyah Fearling. Shalyah is thrilled to see Miley and says it’s the greatest moment of her life. She’s doing A Broken Wing by Martina McBride. Miley gives her some notes on how to change the melody to fit her voice better.

Miley says country doesn’t have to be perfect as long as you’re telling a story. Miley says they have the same birthday. Emily is singing Big Yellow Taxi by Joni Mitchell. Miley sings with her and gives her notes on how to amp it up.

Emily gets into a really strange key and does a totally funky version of the song and then does a squeaky falsetto then drops into alto. Next is Shalyah’s number. She got a standing ovation from the coaches. Adam tells Emily she did a really cool version but Shalyah was crazy confident and the vibe and says damn.

Blake says Emily is so different and vintage and new and says she’s special. Adam mocks him and Blake calls him My Little Pony. Blake says he loves the song Shalyah sang and says she took this round. Christina says this is the best knockout she’s seen.

She says she appreciates what Emily does and love Shalyah. Pharrell says Emily did such a great job and then Shalyah knocked it out. He says they both killed it. Pharrell goes with Emily. Adam slaps his buzzer to take Shalyah.