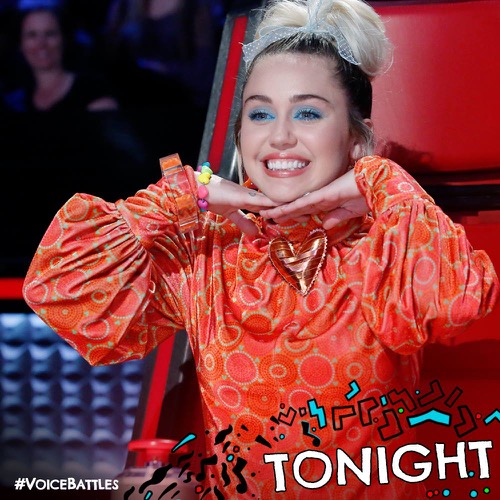 Tonight on NBC’s Emmy Award-winning musical competition The Voice airs with an all new Monday, October 11, 2016, season 11 episode 8 and we have The Voice recap right below.  On tonight’s The Voice episode, The battle round continues.

Did you watch last night’s episode where the Battle round kicks off and the first night had the contestants fighting for their survival?If you missed the episode and what to find out what happened we have a full and detailed The Voice recap, right here for you!

On tonight’s season 11 episode 8 of The Voice as per the NBC synopsis, “The “battle rounds” continue and the coaches enlist the help of the music industry’s top recording artists to offer their knowledge and skills as advisers. Miley Cyrus teams up with Joan Jett, Alicia Keys with Charlie Puth, Adam Levine with Sammy Hagar and Blake Shelton with Bette Midler. In this phase, the coaches pit two of their own team members against each other in a dueling duet.”

#VoiceBattles continues tonight with the judges backstage Blake and Adam hug and Adam says he can’t quit him. First up tonight is a #TeamMiley battle of Lane Mack vs Sophia Urista. They meet with Miley and Joan Jett. Miley has them singing Pink Floyd’s Money.

It’s the first time for a Floyd song on The Voice. Joan and Miley give them performance notes. They do a great job and Adam tells Lane there’s no one like him and tells Sophia she has a great stage performance and needs to tweak her voice a little. Blake says Sophia is prettier than Lane.

Blake says Lane came out swinging and thinks he won it. Alicia says Lane was like an animal and Sophia has a unique energy. She thinks Sophia won it. Miley says she threw a lot at Sophia and she was very professional about it. Miley chooses Sophia for the Knockout Round.

Miley keeps crying over sending Lane out. Courtney and Ethan are up for #TeamBlake and it’s the songwriter and backup singer vs the reggae loving Ethan. Bette and Blake meet with them and they found out they’re singing John Mayer’s Gravity.

They change the key and get some final notes and then it’s battle time. It’s an amazing performance and Alicia says it was beautiful and passionate. Miley says Ethan has an amazing voice and wanted to hear more from him and says Courtney has a big voice.

Adam says they had a good rapport together and are both very talented. Miley says she’d give it to Ethan and Adam says tough choice. Blake says he regrets putting them together and it’s hard. Blake chooses Courtney for the Knockout Round.

We saw just a glimpse of the Battle between Elia and Poinciano. Adam choice Poinciano. Charity Bowden went up against Josette Diaz and we got just a few seconds of that too for Miley and she chose Josette. Miley also had Maye Thomas vs Khaliya Kimberlie. Maye won that one.

Charlie Puth and Alicia hang out waiting on the next rehearsal. Dave was a four chair turn. They’re doing Valerie by Amy Winehouse. They plan some maneuvers to share the piano that look odd. The guys take the stage for their soulful performance.

Everyone is on their feet as they finish. Carson tells Alicia it’s a great battle. Miley says Adam jumped up so fast and wants to steal one of them. Miley says they both shine and it felt like a performance. Adam says Dave broke his heart when he rejected him as coach.

Adam says Michael was incredible. Adam loved the keyboard switch and gives it to Michael. Blake says Michael reminds him of Rick Moranis and Adam grills him. Adam threatens to kick Blake’s a**. Blake says it’s his favorite performance of the day and thinks Michael won it.

Alicia chooses Michael for the Knockout Round. Adam slaps his button to steal Dave. He tells Miley not to press her button and Blake tells her to hit it. No one pushes it and Adam is thrilled to get Dave on his team. He says now Dave is where he belongs.

The Battles continue next week on The Voice with more steals coming. Come back to CDL for LIVE recaps of every episode of The Voice all season long!