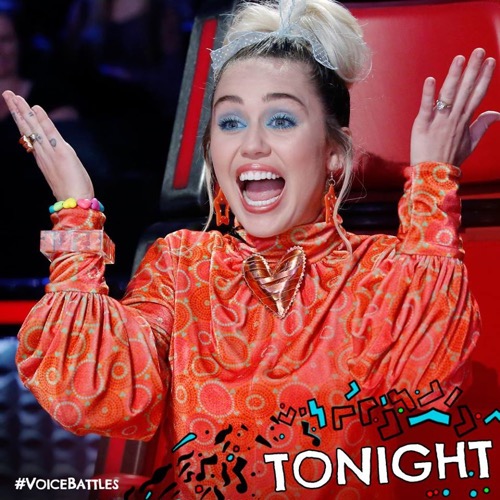 Tonight on NBC’s Emmy Award-winning musical competition The Voice airs with an all new Monday, October 11, 2016, season 11 episode 9 and we have The Voice recap right below.  On tonight’s The Voice episode, the third round of battles features vocal powerhouse performances.

Did you watch last night’s episode where The “battle rounds” continued and the coaches enlisted the help of the music industry’s top recording artists to offer their knowledge and skills as advisers? If you missed the episode and what to find out what happened we have a full and detailed The Voice recap, right here for you!

On tonight’s season 11 episode 8 of The Voice as per the NBC synopsis, “-The “battle rounds” continue and the coaches enlist the help of the music industry’s top recording artists to offer their knowledge and skills as advisers. Miley Cyrus teams up with Joan Jett, Alicia Keys with Charlie Puth, Adam Levine with Sammy Hagar and Blake Shelton with Bette Midler.”

#VoiceBattles are back tonight and first up is #Team Adam whose coach is with Sammy Hagar jamming before they start working with tonight’s artists. Adam plays drums while Sammy sings and jams with the band. We also see Blake joking that he’ll go off if Alicia tries to steal anyone he wants.

This first battle is the school IT guy Johnny against Nashville rocker dad Nolan. Adam has chosen Peter Gabriel’s Sledgehammer for them to take on. Sammy tells them to have fun with it and both him and Adam offer them performance notes and direction to profess it, not just sing it.

They take the stage and the battle is on and they do the 80s rock anthem justice. They rocked the house and Blake says it was evenly matched despite Nolan being a four-chair turn. Blake asks how Johnny’s hat stays on and says he thinks Johnny won it. Alicia says they worked the stage and she felt it.

Alicia goes with Nolan for the win. Miley says it was awesome and says the harmonies were tight but gives it to Johnny for the win. Adam says they both worked hard and then he chooses Nolan to go into the Knockout Round. Johnny doesn’t land a steal but he did a great job against a four-chair turn artist.

Miley has paired shy college kid Karlee up against teen warbler Darby. They meet with Miley and Joan Jett. Miley has them doing Melanie’s funky Brand New Key from the early 70s. They get some notes on harmony and not going too big plus some performance notes and then they’re ready.

They take the stage and the battle is on. It’s a fun quirky little number that brings Miley to her feet. Adam says it was the Mileyest thing ever and says it’s Miley-ass. He says Darby was hard to look away from and Carly was more grounded vocally. Blake says he loves this song and Darby was entertaining.

Blake says she sang well but says Carly was better vocally. Alicia says she couldn’t get enough of this and says it’s a tough choice. Miley says Carly has transformed and then decides to take Darby to the Knockout Round. Blake slaps his steal button and Miley is thrilled.

This Blake pairing is jack of all trades and music man Blaine up against former ball player Josh. Bette Midler and Blake meet with the guys and Blake has them sing Ronnie Millsap’s Stranger in My House. They get their notes and then Bette tells Blaine to change his baggy pants.

Now it’s battle time. They do a great job on the country classic. Alicia says Blaine’s voice really stood out and praises Josh’s showmanship. Miley says she’d love to see Josh to stay and work with Blake. Adam says Josh is like a contemporary country singer but Blaine is great too.

Adam is torn. Blake says Blaine sells himself short on what he’s vocally capable of doing. Blake says he doesn’t know what to do. Finally Blake decides to take Josh to the Battle Rounds. Blake sweated that one and Blaine says he had a good time and tried his best.

There’s another #TeamBlake battle of Dana Harper vs Tarra Layne that we just see a clip of it and he kept Dana. Then there’s a #TeamAlicia battle of Halle Tomlinson vs Belle Jewel on a funky Elton John song and Alicia chose Belle for the Knockout Round.

A #TeamAdam battle we got just a glimpse of was JSoul vs Simone Gundy and Adam decides to go with Simon and says she has a magic he just can’t describe. Those are the unseen battles so far and we’ve only seen one steal used tonight.

This is Alicia’s first battle of the night. Country boy and cattle hand Josh goes up against Kylie who’s recovering from throat surgery. Charlie Puth is mentoring them and he remembers Kylie from college when they went to school together. Josh and Kylie will perform House of the Rising Sun.

They get their performance notes and then it’s battle time. They both play their guitars as they sing. They kill it. Miley says this is a tough one. She says they are so different and showed more range for Kylie but thinks Josh won it. Adam says the song was a good fit and would go with Kylie.

Blake says Josh will make it huge and says he loves the shred in Kylie’s voice. Alicia says she was so taken by Josh and says she was excited to see Kylie with her guitar in the blinds. Alicia decides to take Kylie to the Knockout Rounds.

Miley pushes her steal button with her tongue. Miley is so excited she’s shaking. She’s thrilled to have him on her team. She says they’re on a similar path and can’t wait to work with him and Alicia is relieved that he got stolen.

Church boy Christian is up against Louisiana teen Gabe for this #TeamBlake challenge. They are doing The Reason by HoobaStank and meet with Blake and Bette Midler for a coaching session. They get lots of notes and Gabe struggles since his voice is still changing.

They do battle and it’s interesting. Alicia says Gabe’s voice is rich and he really went for it. She says she liked when Christian riffed and says it’s tough but she’d go with Gabe. Miley says her dad made her buy him an iPod so he could listen to it. She says they have different voices.

College student Aaron turned three chairs in the blinds and he’s up against single mom Sa’Rayah who has a huge voice. Miley and Joan Jett greet them and Miley says she has them doing I’ll Take Care of You by Beth Hart. Aaron will play guitar and both will sing.

They get their final notes and then it’s battle time. It’s outrageously good and all the coaches are on their feet. Adam asks Aaron what the hell was that and says he’s amazing then says Sa’Rayah proved she can fit anywhere and calls them both spectacular but would go with Adam.

Blake says Sa’Rayah was born to see that song. Then he says they all love Aarons voice too. Alicia says that was crafted and beautiful and is proud both are there singing for them. Miley now has a tough choice to make. Miley chooses Aaron to take to the Knockout Round.

Blake slaps his steal button and so does Alicia. Sa’Rayah is thrilled. Blake says Alicia is mean to him. Blake says he has no one like her on his team and loves her. Adam says Alicia said two words and Sa’Rayah started crying so Blake has no chance at all. Adam says don’t pick Blake. Sa’Rayah chooses Alicia.