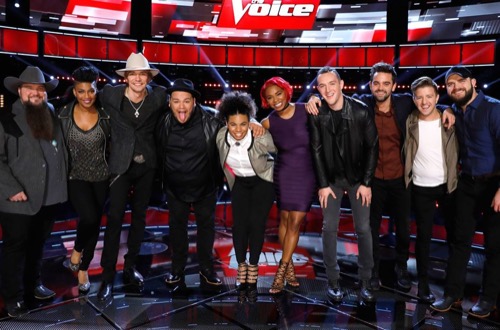 Tonight on NBC’s Emmy Award-winning musical competition The Voice airs with an all new Monday, November 28, 2016, season 11 episode 20 and we have The Voice recap right below.  On tonight’s The Voice episode, the Top 10 artists perform.

Did you watch last night’s episode where the top 11 artists performed live in front of coaches Miley Cyrus, Alicia Keys, Adam Levine and Blake Shelton for America’s vote and Carson Daly hosted? If you missed the episode and what to find out what happened we have a full and detailed The Voice recap, right here for you!

On tonight’s season 11 episode 20 of The Voice as per the NBC synopsis, “The top ten artists perform live in front of coaches Miley Cyrus, Alicia Keys, Adam Levine and Blake Shelton for America’s votes.  Voting begins tonight at 8 and continues until noon Tuesday. Based on the votes one artist will be sent home this week.”

#TheVoice starts with Top 10 Billy Gilman getting back to his country roots. Adam Levine suggested Martina McBride’s Anyway and Billy belts it like a champ in rehearsal. Billy is worried because two people are going home. Adam calls him bullet proof.

Billy takes the stage after some notes from Adam. The crowd sways as he sings with that big voice of his. The crowd cheers as he hits a huge note. All four coaches are on their feet for him when he finishes. Blake says he’s happy to see Billy go country and says he’s so good at it.

Blake says he has incredible range and says great job. Miley says it’s bad for her team, but good for him. She says this was his moment and says he deserves this. She says he may be the winner. Adam says it’s amazing how he can still astound him.

Adam says everyone knows he can sing and knows his story but what they heard was so special. He says he’s blown away. You can vote on the app, Facebook, the website or on iTunes. Two will be eliminated tomorrow night bringing top 10 to top eight.

Courtney Harrell tells Blake that her favorite music is soft rock from the 80s and she’s doing Cher’s If I Could Turn Back Time. Blake tells her that Cher was his mentor a few seasons ago. Courtney talks about her insecurities and growing up differently. Blake says she’ll knock it out of the park.

Blake says he literally feels like we have our top 10 and she’s like a new contestant and says her stage presence and personality came out like it never has before. Blake says she looked like she was having the kind of fun she should be having on a show like this.

The Voice mentor’s Tim McGraw is the song of choice for Josh and he’s doing Real Good Man. Adam and Josh talk about their wives and how being married makes you grow up. Adam gives him some performance notes to be badass and then they have the stage rehearsal.

Josh takes the stage. He rocks it out and really uses the space plus there are flames and lots of fun. Josh says he had fun. Alicia says this is fantastic and says she didn’t know you could do pyro and smoke and says he was in his element and was controlling the energy and it was solid.

Adam says he’s so happy for Josh because he’s a great singer and everybody loves him and he’s consistent but tonight a country star was on the stage doing that and says it was amazing and he’s blown away by him.

Miley and Aaron work on a song choice that will draw in votes and keep him out of the bottom three for a third time. He’s doing a funky offbeat version of Elton John’s Rocket Man. Miley says this reminds her of Dave Matthews Band.

Aaron is ready and starts his performance. It’s very cool but it doesn’t have the huge notes of some of the other performances. Adam says he feels like he’s establishing himself for after the show and says he wants to know what he has to say and he’ll stay a fan of his.

Miley says she’s a fan of Aaron too and says she loves pyro but that’s not him and says he doesn’t need that or glitter and glam. She says he just needs his guitar and his voice because he’s an artist and himself and says he killed it tonight.

Maroon 5 sings as Adam Levine and Maroon 5 take the stage and perform their hit Don’t Want to Know.

Christian is doing a new Lady Gaga song called A Million Reasons. He has a string arrangement to make it his own. Alicia says prayer is important to him so this will give him lots of juice. She has some advice on exploring his head voice and restraint.

The string arrangement is mesmerizing and he does it well. Alicia is on her feet for him at the end. Carson says it was awesome. Blake says that was a timely performance at the play we are in this season. He says he’s an incredible vocalist and this was an incredible moment.

Alicia says she’s so proud of this moment for him and says an artist was born on this stage and says he took her on an emotional experience when he was crying while singing. She says she knows everyone related to him in a way they never have before.

Austin is doing a cover of 80s song Missing You by John Waite. Blake wants them to do it unplugged and says the fans need to see a softer side of him. Blake checks in via phone later on the changes Austin is making and then he takes the stage to sing.

He fills the room with his big voice and Miley says only on Team Blake do you get a camo tuxedo and says it’s so cool. Miley says he was screaming into the mic and she got teary eyed because she believed what he was saying and singing. She calls it amazing.

Blake says something happens when he’s on change and says his personality strolls around all tall and lanky then this music comes out with this range and power. He calls it so emotional and says he took a classic song and made it his own.

We’ wants to do Billie justice with her rendition of God Save the Child. She says her family has been so supportive. Alicia sings along with her to show her how to do some swag. We’ says she’ll channel her and Alicia talks about the opera side of We’s voice.

We’ does a beautiful song and pulls out the opera pipes at the end to bring down the house. Alicia is up shouting yes for her. The crowd won’t stop cheering. Alicia says there is nobody like her period. She says it’s incredible to see her like this.

Alicia says at 17, none of them did that. She says it’s beautiful to appreciate and honor her as she shows all the sides of her. Alicia says she has no boundary and America appreciate the fact that she bursts through their hearts every time she sings.

80s mega-hit True Colors is what Brendan has chosen. He tells Brendan to imagine Bruce Springsteen singing that song and try it. Adam gives him thumbs up and Brendan says this reminds him of his parents and what they did for him. He dedicates it to them.

Adam gives him some notes and then he’s ready to go. Adam and Miley stand for him clapping when he’s done. Miley says he sang about a rainbow and she’s so happy about that. She says he made True Colors her new favorite song and says she pictured him singing it to her.

Adam says he’s the first guy this season to take a song and artistically create a version that is so incredibly different, special and valuable that people will want to listen to. Adam says when he relaxed and smiled, it made him so happy.

Sundance cracked iTunes Top 10 last week and this week he chose Me and Jesus. Blake wants him to turn it into a barn burner and Blake steps up to play and produce. Sundance says they’re going to kick it into overdrive with the bluegrass element.

He takes the stage and does the song up in a big way. All the coaches stand for him and Alicia says he’s got her heart and says he’s going to take people’s hearts wherever he goes. She says she’s right at home with him and the music brings them all together.

Blake says they’ve never had a performance like that on The Voice before. He congratulates him then says that was a moment and says more people have their own relationship to God and that song speaks to them and says he loved it.

Ali Caldwell sings Without You

Ali Caldwell and Aaron serenade Miley on her birthday then they start rehearsal. Mariah covered Without You and Ali works to make it her own. Miley says she needs to have the audience in the room feel it so it’s a drop the mic moment. With some final notes, she’s ready.

Ali takes the stage and she really belts it out. It’s incredible. The judges are all on their feet clapping for Ali. Miley says for the world’s biggest voice they did the biggest train. Adam interrupts and says that train went 50000 feet across the stage.

Miley says it takes her back to the blinds when she felt like she won when Ali picked her. She says she loves to create music and dreams with her and wants to make her the biggest star in the world and wants to see her shine the way she deserves to.

Tune in tomorrow for the double elimination and CDL’s live recap.