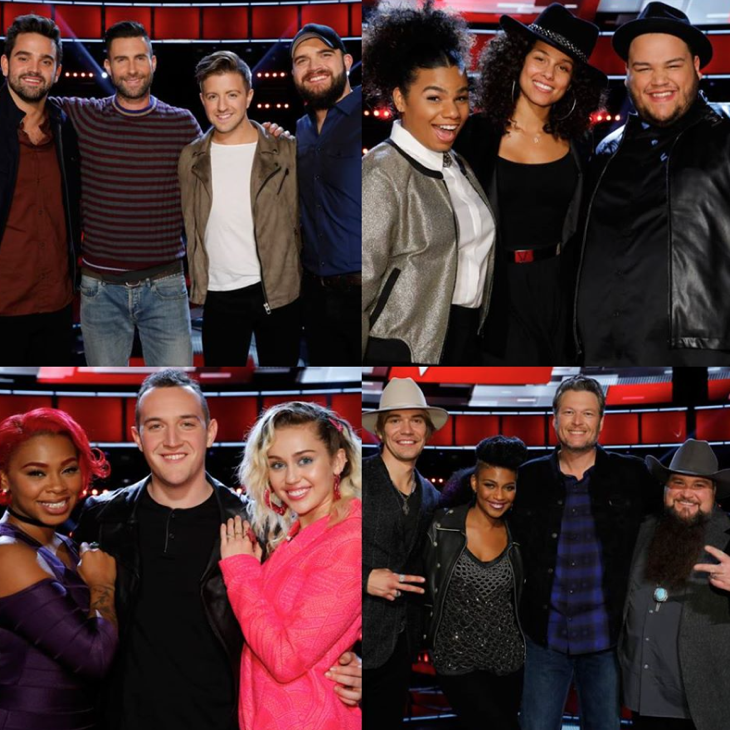 Tonight on NBC’s Emmy Award-winning musical competition The Voice airs with an all new Tuesday, November 29, 2016, season 11 episode 21 and we have The Voice recap right below.  On tonight’s The Voice episode, it is the results show and after last night’s amazing performances one artist will be sent home.

Did you watch last night’s episode where The top ten artists perform live in front of coaches Miley Cyrus, Alicia Keys, Adam Levine and Blake Shelton for America’s votes and Country and Ballads ruled the night? If you missed the episode and what to find out what happened we have a full and detailed The Voice recap, right here for you!

On tonight’s season 11 episode 21 of The Voice as per the NBC synopsis, “Tonight is The Voice Top 10 Eliminations and one artist will be sent home – Who will make it to the live semi-finals?”

#TheVoice starts with a performance by Dolly Parton, Jennifer Nettles and the top 10 artists. We see a video of Jane Lynch hosting a special game night for the four judges. They have to sing through a weird distorting mic and guess what is. The guys beat them by one point.

The top 10 come to the stage and Carson asks Sundance about being on the show. He says he likes meeting all the wonderful people and hanging out with Austin and they hug. The first two artists safe tonight are Team Adam’s Brendan Fletcher and Team Blake’s Sundance Head. They are in the semi-finals.

Sundance and Brendan are safe!

Carson asks Blake about the competition and he says this is so hard for the competitors. Alicia says they’re trying to figure out the best song choices for the last few episodes to help them create a moment. Miley says her parents didn’t want her in the industry because they didn’t want her to get hurt.

She says it’s hard and you have to brush yourself off and she saw that with Aaron the last two weeks. Adam says his job is to treat each person on the team like they will win and he sets them up to do that individually. He hopes all of them will be in the finale.

Carson calls them back to the stage and asks Christian about last night. He says it brought him back to the blinds and he says his heart has grown and his love for music. The next two artists safe and moving to the top eight are…

America saved, from Team Alicia, Christian Cuevas. He’s in the top 8 semi-finals now and goes to hug his coach. Also safe, from Team Miley, Ali Caldwell. That means all four coaches have someone in the semi-finals so no coach will be shut out.

Ali and Christian are safe

The others come back out and Aaron talks about Miley teaching him to be true to himself and that’s why he likes her as a coach. Now two more results. That will take us down to four at risk. Safe this week, from Team Adam, is Billy Gilman.

Billy is thrilled and gives Adam a big hug and Miley a kiss. Also safe is We’ McDonald from Team Alicia. The tiny powerhouse comes to hug Alicia and Miley That gives Alicia and Adam two artists so far and one each for Miley and Blake.

We’ and Billy are safe

Miley, Dolly Parton and Pentatonix do a special rendition of Jolene. It’s really cool. The four artists come back out and Carson talks to Courtney about her experience. She says it means the world to her. Austin tears up when he’s questioned and tells his family he loves them.

One more will be declared safe and the other three will sing for an Instant Save. The last one safe tonight is Team Adam’s Josh Gallagher. He is in the semi-finals.

Austin sings for Instant Save

Austin sings Tennessee Whiskey for his save song. He does it up nicely. Adam says he likes Austin more and more and is a believer in the work he’s done with Blake. He says he’s a great guy and he roots for him and wants him to have success.

Blake says a feather in his cap this season was that he was the only one that turned his chair for him and he’s still standing this deep into the seasons. He says Austin is a great country singer and not like anybody out there and says that’s why he’s still there.

Courtney sings for the save

Courtney chooses Narrow the Broken Road for her Instant Save song. Alicia is up cheering for her and so is Blake. Alicia says it was beautiful and says her heart is so pure and says life tries to smush us into little boxes and she watched her burst out and stand in her own-ness.

Blake says this is tough for him because Courtney is one of his favorites ever and says her instincts for doing this are right. She says she made it so far with America in this competition. He says please vote for Courtney, she deserves it.

Aaron sings for Instant Save

Aaron has chosen Don’t Think Twice, It’s All Right for his save song and he sings and plays the guitar. His voice is incredible. Adam says it was the best performance he’s ever had on the show and he believes Aaron should be the one to move forward.

Adam says if he leaves, it’s a huge loss. Miley says she can’t and says her mom hugged Aaron back stage and says she’s crying now too. She says Adam was so nice and she says she believes the same thing and says if he leaves, he will still do incredible things and they will play his music loud.

Austin says Blake is the same guy he met 11 years ago and is as cool now as he was then and he appreciates the opportunity he gave him. Courtney says she came there to face her biggest fear and he has helped her. She thanks him for helping her be free of that fear.

Aaron says Miley is amazing, genuine and awesome and has made more of an impact on him than she’ll understand. Blake says there’s nothing you can say to justify them being in the bottom three and nothing is bad, it’s just one of those things.

Blake says both of them came so far and will never forget the memories they made together and congratulates them both. Miley says she would love everyone in the room to understand that it takes so much strength to get up there and says it’s the most intimidating stage in the world.

She says she’s traveled all over the world but this one is the most intimidating since you can see every face and there are millions watching. She says it’s hard to make art into a competition so she doesn’t like them going home.

America saved Aaron Gibson! Miley goes dancing and cheering as this is announced. Come back next week to CDL for a live recap of The Voice semi-finals.