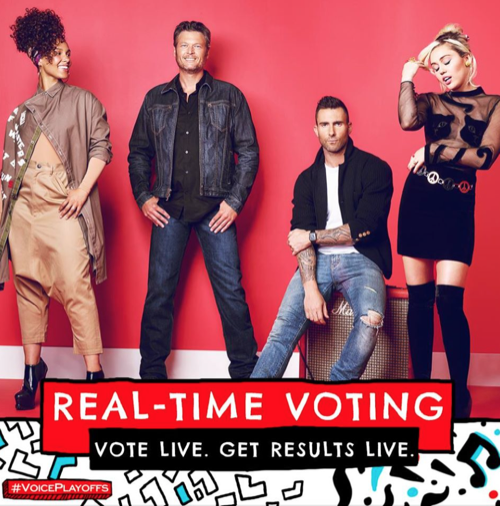 Tonight on NBC’s Emmy Award-winning musical competition The Voice airs with an all new Monday, November 7, 2016, season 11 episode 15 and we have The Voice recap right below.  On tonight’s The Voice episode, the playoff round opens with the Top 20 artists performing and battling for a coveted spot in the Top 12.

Did you watch last night’s episode where we relived this season’s best performances and the top moments from Season 11 were recalled as the journey of the Top 20 was chronicled.  ? If you missed the episode and what to find out what happened we have a full and detailed The Voice recap, right here for you!

On tonight’s season 11 episode 15 of The Voice as per the NBC synopsis, “The stakes are high on the eve of the Presidential election and for the first time in the show’s history, the Top 20 artists will all perform in one night for a coveted spot in the Top 12 live show. Through a first of its kind real-time vote on the Voice App and Twitter, fans will be able to advance two artists per team into the Top 12 and find out the results on the same night. During the exciting, music-filled and fast-paced night, coaches Miley Cyrus, Alicia Keys, Adam Levine and Blake Shelton will immediately choose the final artist from their teams to save, sending the other artists home.”

#VoiceLive tonight has performances and voting tonight so we’ll see results in real time. Alicia talks to her team before the performances and gives them some last minute notes and support before they’ll face the stage. 20 will be cut to 12 tonight.

First up is Christian Cuevas singing Yesterday, a Beatles cover. He sings beautifully and plays his guitar to accompany. Christian brings all four judges up on their feet. Kylie Rothfield is next with her cover of the Stones’ Satisfaction. She rocks the house and has everyone on their feet too.

We’ McDonald is next and she sings Home. She slays it and the crowd is loud and shouting as she wraps her performance. Next up is Josh Halverson doing Sam Cooke’s classic Cupid from the 60s. He’s made it folksy cool and the crowd and judges dig it.

The last to perform tonight for Alicia is Sa’Rayah singing I’d Rather Go Blind. She really works her powerful voice and fills the room with it. She also gets the judges on their feet and Carson says wow. The voting for Team Alicia is open but closes at the end of the commercial break. Only three of five will survive the night.

#TeamBlake gets its shot

Blake visits with his team and gets them ready for their live performances and then his five take their turns. First up is Dana Harper doing Hall & Oates Maneater. She’s slowed it down and totally changed the 80s hit. Dana brings the house to their feet.

Now we see Austin Allsup doing Waylon Jenning’s I Ain’t Living Long Like This. This upbeat country song has the crowd grooving. Jason Warrior is next up and he does Drake’s One Dance. Jason goes nuts and winds up on his back on the stage – it was a true performance.

Sundance Head is next and he does Keith Urban’s Blue Ain’t Your Color and man is he wailing and fills the room with sound. Last up for Blake’s team is Courtney Harrell with It Must Have Been Love, a Roxette hit from the 90s. She’s flawless in her delivery.

While voting wraps up for Team Blake, Carson delivers results to Alicia’s team. Miley says this show makes her nervous and it’s really intense. Miley says she’d like to see Christian and We’ stay. Carson reveals the top two on Team Alicia are Christian Cuevas and We’ McDonald just as Miley predicted.

Now Alicia has to decide who stays. Josh Halverson, Sa’Rayah and Kylie Rothfield wait to find out. Alicia says Josh is such a one of a kind then says Kylie overcomes all her obstacles. She says Sa’Rayah makes her feel God in the room. Alicia says they achieved so much and are all incredible.

Alicia stands and Carson tells her to choose who moves on. Alicia says she loves and believes in them all but decides to keep Sa’Rayah. #TeamAlicia in the top 12 will be represented by Christian, Sa’Rayah and We’.

Miley has love and last-minute notes for her five performers before they take the live stage. Sophia Urista is up first and does Rod Stewart’s Da Ya Think I’m Sexy? She does a unique cover on Rod’s disco era classic that the crowd loves.

Darby Walker does the 1960’s Those Were the Days. It’s funky as usual and the crowd digs it. Aaron Gibson is next and does Round Here by Counting Crows. His voice is so raspy and hot. Whew… The audience loves it!

Next up for Miley’s team is Belle Jewel who does Del Shannon’s Runaway. She’s a special flower as always and makes the song her own. Ali Caldwell is last for Team Miley and she performs Irma Thomas’ Times Have Changed and her powerhouse voice has everyone on their feet.

Now it’s time to get the results for Blake’s team and all five take the stage. First moving to the next round is Sundance Head and his big country voice. America also saved Austin Allsup. Both his guy country artists are safe and moving on.

Courtney Harrell, Jason Warrior, and Dana Harper wait for Blake’s decision. He says Dana and Courtney he’s worked more with than Jason and says any of them could win this and he believes it in his heart. Blake says this sucks so bad and tells Miley she’ll hate when she has to do it.

Miley says she doesn’t want to. Blake says he has to pick someone and Carson asks who he’s saving. Blake decides to keep Courtney Harrell. She’s floored and thrilled.

Adam works with the team on their live performances and talks about the team and his hopes for them. First up for Adam’s team is Brendan Fletcher singing To Love Somebody, the Bee Gees classic. He brings a great depth to his performance and his guitar playing is spot on.

Next up is Simone Gundy doing Diamonds by Sia. Her voice does justice to the challenging song. She belts out some huge notes. Wow. She brings down the house. Josh Gallagher does Colder Weather and remember he’s Adam’s only country artist. His strong voice carries it gorgeously.

Adam’s next artist is teen crooner Riley Elmore doing Luck Be a Lady by old blue eyes Frank Sinatra. Last up is Billy Gillman who does Roy Orbison’s Crying (side note this was on The Walking Dead last night when Daryl was crying). His voice is matched by the challenging song. Big notes. Big reaction.

Miley’s team comes out to get their results and Carson congratulates them. Alicia says her top two rom her team would be Darby and Ali. The crowd seems to agree. Carson reveals that the top two artists saved by America are Aaron Gibson and Ali Caldwell.

Now Miley has to choose between Sophia, Belle and Darby. The crowd chants and Miley says she doesn’t listen to what others tell her but she’s choosing Darby Walker. Ali, Aaron and Darby will represent Miley in the next round.

All of Adam’s artists take the stage to find their results. Carson asks Blake to choose two. Blake says Billy just slayed it and he’d also choose Riley and says he and Adam both like that. Adam says wow, they all were amazing and he believes all five would move on if it was overall best performances.

Carson reveals that America has saved the top two and it’s Billy Gilman and Josh Gallagher. Adam hastily decides he’ll take Brendan Fletcher along as his third heading into the next round.