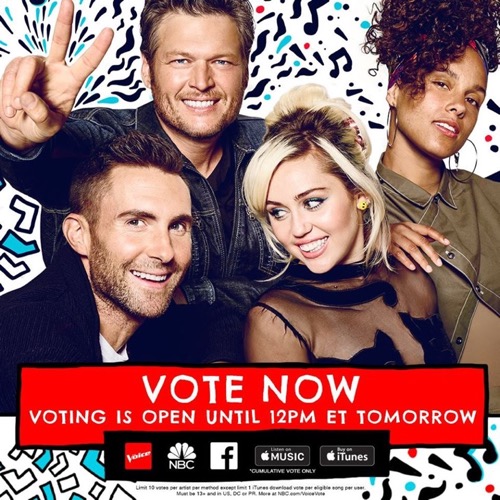 Tonight on NBC’s Emmy Award-winning musical competition The Voice airs with an all new Tuesday, December 5, 2016, season 11 episode 22 and we have The Voice recap right below.  On tonight’s The Voice episode, it is the semi-finals and the top 8 artists perform.

Did you watch last night’s episode where it was the Voice Top 10 eliminations and Courtney chose Narrow the Broken Road for her Instant Save song but it was not enough and she was sent home? If you missed the episode and what to find out what happened we have a full and detailed The Voice recap, right here for you!

On tonight’s season 11 episode 21 of The Voice as per the NBC synopsis, “The Top 8 artists perform live in front of coaches Miley Cyrus, Alicia Keys, Adam Levine and Blake Shelton for America’s votes and the chance to move ahead to the live finale.”

#TheVoice semi-finals start now with two performances from each artist. Each will sing as an individuals on a song they chose and then they will perform a duet with another artist. Each takes the stage twice then tomorrow night, the top eight will be cut to the top four for the finals.

Christian Cuevas takes us to church

Christian has chosen To Worship You I Live (Away) by Israel & New Breed. He wanted to do a gospel song and is doing part of it in Spanish. He gets final notes then performs. Adam says no one wears their emotions on their sleeves in this competition like him.

Adam says he envies that about Christian. Blake says whatever Christian is feeling, he makes them feel and you can’t ask for more than that and says he’s a great artist. Alicia says she’s so proud of him and says he lost himself in that performance and it was beautiful.

Aaron Gibson and We’McDonald duet on Four Five Seconds and their robust voices really complement each other. It’s a great duet but Aaron Gibson seems a long shot to make it to the finals given the struggle he’s had the last few weeks.

Ali is singing I Will Always Love You and Miley is happy since it’s her godmother’s song but Ali is doing more of the Whitney Houston version. She slays it. Alicia says she loved everything about that and says she’s been honoring her look and her fire.

She says that’s a legendary song and it didn’t shake her at all and showed restraint. Alicia says it was a beautiful perfect performance. Miley says Alicia just said everything she wanted to say and put it into words for her.

Brendan did great on iTunes last week and now is singing Sarah McLachlan. He gets some notes from Adam and then takes the stage. The crowd loves it and Blake says Brendan has had consistent growth in terms of popularity on iTunes.

Blake says his voice is infectious and it’s gravelly and warm. He wants him to do Michael McDonald. Adam says Brendan is spectacular and he’s so proud of him. He says Brendan is so pure to who he is and says he needs to reward so he can be in the finale.

Josh Gallagher and Sundance Head duet on Feeling Alright by Joe Cocker. Sundance and Josh tease each other before they perform and talk about theirs being the best duet of the night. They kill it and it’s an amazing rock out of a great classic song.

We’ sings about scars

We’ McDonald sings Alessia Cara’s Scars to Your Beautiful and it’s a great anthem for young women. She rehearses then sings for the crowd. Miley rocks out and says she loved it and likes to know what artists will do after this show.

She says that shows her what a We’ tour would be like and she loved how she used the stage and the set to add to and not distract from her talent. Alicia says she’s so so so proud of her and says We’ knows what she wants and this is We’s vision.

She says We’ is her own artists, knows what she wants, what she wants to say and how she wants people to feel and delivers. She says that’s why the crowd can’t stop cheering for her and we are seeing the growth of a star on this show.

Aaron tells Miley he had to shave his legs on a bet. Miley says he’s a cat since he’s been in the bottom three times and survived. He’s singing (Everything I Do) I Do It For You by Bryan Adams. Miley says this was something different than what he’s done.

Miley says everyone is coming out guns blazing and she wanted to change things up and do a big classic song that everyone will vote. She says please vote for him so he’s not in the bottom and she thanks him for doing it.

Billy Gilman and Christian Cuevas talk about horsing around and they tease each other. They compliment each other and then sing together on a duet of Unsteady by X Ambassadors. They are incredible together. Wow. The crowd digs it.

Josh reaches way back to do Danny’s Song by Kenny Loggins. Adam loves it, gives notes and then Josh takes the stage. They countrify it a little and he performs it perfectly. The crowd loves it. Adam says he nailed it and Josh knows it and he can tell by his smile.

Adam says that was the best of the night so far vocally and for the feeling. Adam says it was the best song for his voice, tasteful, his voice is better than ever, and it hit. Alicia agrees it was really good and the crowd agrees by cheering.

Next up is another duet featuring Ali Caldwell and Josh Gallagher. They talk about performing together and they both flatter each other a lot. They say it will be amazing and with fireworks. They sing It’s Only Love by Bryan Adams. Bryan dueted on this with Tina Turner back in the day.

Josh wails on his guitar and uses that deep voice and Ali belts it out and channels goddess Tina. They bring down the house. It was the best duet of the house.

Blake asks Sundance to do The Judds Love Can Build a Bridge. Wynonna calls Sundance to encourage him and says just be you. He rehearses with Blake then performs. Sundance bring down the house. Blake says he thinks everything great about that right now.

Blake says what can you say about Sundance anymore and says he blows his mind. He says every week he comes out and blows people away and he’s like no one else. He says he has so much talent he was born with and so much passion. Blake says this could not have been better and says it’s happening.

Billy has chosen Celine’s I Surrender. This is a big challenge and Adam says his purity of voice has been at a 10. They do a final rehearsal and then Billy sings. He tears the song apart. Adam and the other judges are on their feet as he closes the show down magnificently.

Adam says everyone knows about Billy and what he can do then says the coaches all had a look of shock that he can sing like that. He says it’s hard for Celine Dion to sing one of her songs and the passion that Billy sang with and says he held out those notes so long and it’s hard.

He says Billy is humble and deserves this. That’s it. Voting closes at noon and tomorrow night the top eight will be cut to the top four for the finals next week.