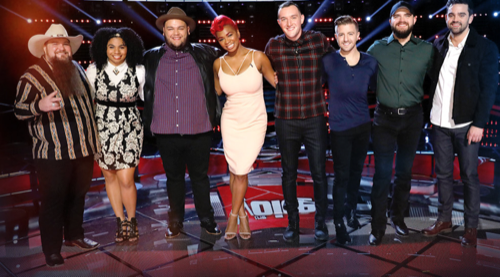 Tonight on NBC’s Emmy Award-winning musical competition The Voice airs with an all new Tuesday, December 6, 2016, season 11 episode 23 and we have The Voice recap right below.  On tonight’s The Voice episode, America votes for top artists to advance in a semifinal-round results installment.  Who will make it to the live finale?

Did you watch last night’s episode where The Top 8 artists performed live in front of the coaches and Billy Gilman Slayed Celine Dion cover? If you missed the episode and what to find out what happened we have a full and detailed The Voice recap, right here for you!

On tonight’s season 11 episode 21 of The Voice as per the NBC synopsis, “Tonight on a results episode we will find out which artists make it through to next week’s live finale.  Tonight’s Performers include Blake Shelton, OneRepublic and Hannah Huston.”

#TheVoice starts with coach thoughts. Blake says Sundance has a good path no matter what happens from here. Carson tells Alicia and Miley they have both been great coaches. Alicia says Christian and We’ have been incredible to work with and they have a clear vision of who they are.

Miley says this level of talent is one in a bazillion and she has two so she’s honored and it’s more than she could have dreamed of. Adam says he tries to do the best he can do every season and he’s so proud of the guys on his team.

The top eight come to the stage. Carson asks Christian about last night and he says he’s the same person that he came in as but he’s better now. The first person saved tonight by America’s votes is Team Adam’s Billy Gilman.

One Republic is on next and sings Let’s Hurt Tonight. We see that the top eight got a backstage tour of the set of Hairspray Live. Jennifer Hudson gave them a tour. She’s starring in Hairspray and is a coach on The Voice UK too. They ask her some advice about the competition.

Carson asks Sundance about his growth as an artist and he says Blake has taught him to trust himself and to be quiet and listen. America also saved, from Team Blake, Sundance Head. The little guy with the big hat will move on to the finals!

Hannah Huston was a finalist in last year’s The Voice and is back tonight by fan vote to perform in the semi-finals. Hannah sings I Alone Have Loved You and the former Team Pharrell artist is great.

We’ McDonald is safe!

Blake Shelton takes the stage to perform A Guy With a Girl. It’s great then Carson calls out the remaining five to find out which two are cut and which three will sing with the Instant Save. The three that will sing for an Instant Save are: Ali Caldwell, Josh Gallagher and Christian Cuevas.

That means Brendan Fletcher and Aaron Gibson have been eliminated from The Voice Season 11.

Christian Cuevas sings Bonnie Raitt’s I Can’t Make You Love Me for the Instant Save. #VoiceSaveChristian to vote for Christian. Alicia says she can feel the soul he brings and there is never an impure moment with him. She says he translates the truth into song.

Ali Caldwell sings Rihanna’s Sledgehammer for her chance at the Instant Save. #VoiceSaveAli to vote for Ali. Miley stands for her and says she doesn’t even know how she did that and says she was ready to pass out and says life is what you make it and says she’s so proud of her.

Josh Gallagher sings I Drive Your Truck by Lee Brice for his Instant Save song. #VoiceSaveJoshG to vote for Josh. Adam says he wants there to be something different in the finale and says Josh gets constantly better and charting higher and says everyone loves you and you have more to give.

Instant Save voting opens for a five-minute window.

Alicia says Christian has a huge purpose and has handled this with grace and it goes far beyond this moment and that goes for all three of them. She says Christian gives light wherever he goes and everybody feels him.

Miley congratulates all three for making it this far and says it’s been intense and they won and are so talented and deserving. Miley then tells Ali she makes people believe what she’s saying and is not like anyone else and is a superstar.

Adam tells Josh that he stole him and got started late with him. He thanks Blake. Adam says we just hit our stride and we’re on such a roll and everyone connects with him and they feel like they know him. He says he can sing in a way that’s no frills and everybody understands.

Josh Gallagher is the Instant Save!

The last finalist moving on to next week’s live finale is Josh Gallagher. Ali Caldwell and Christian Cuevas are eliminated. That means the finalists for next week’s finale are Sundance Head, Josh Gallagher, Billy Gilman and We’ McDonald. Every coach but Miley is represented.