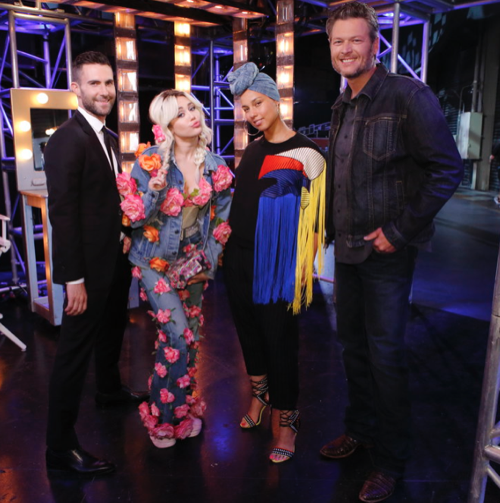 Tonight on NBC’s Emmy Award-winning musical competition The Voice airs with an all new Monday, September 26, 2016, season 11 episode 3 and we have The Voice recap right below.  On tonight’s The Voice Blind Auditions part 3 the blind auditions continue.

Did you watch last week’s episode where the Blind Auditions premiered and the coaches all vied to discover and coach the next singing phenomenon from the country’s best vocalists? If you missed the episode we have a full and detailed The Voice recap from last week, right here for you!

On tonight’s season 11 episode of The Voice as per the NBC synopsis, “The “blind auditions” continue as superstar coaches Miley Cyrus, Alicia Keys, Adam Levine and Blake Shelton all vie to discover and coach the next singing phenomenon from the country’s best vocalists. The vocalists compete to be selected by one of the coaches and fight for a chance to win the title of being named “The Voice.”

#VoiceBlinds starts with Bindi Liebowitz who talked about how she lost interest in singing when her mother was stricken with cancer but now she’s cancer free. She sings – and gets her first chair turn from Adam and Blake turned at the last minute.

Adam and Blake both stand to fight over her. Adam says he wanted to keep her to himself then Blake turned. He says she made amazing choices. Blake asks him to be quiet. Adam says he loves and needs her. Blake says she has a lot of different influences and calls her ear candy.

Blake and Adam bicker and fight over her and Blake brings up his track record and that he’s won with all sorts of artists not just country. Bindi finally chooses Adam for her coach. Adam mocks Blake over winning Bindi away from him. Adam goes to meet Bindi’s mom.

Next up is Zack Hicks who is from Arkansas. He talks about coming out and it’s difficult since he was a jock in high school and is a country boy. He says it was tough because his mom didn’t talk to him for half a year. His mom is there with him now and says she loves him no matter what.

His fiancé is there with them. He sings At This Moment. No one turns but Blake was thinking about it. Adam says he has a big beautiful voice. They give him some notes on song choice and style notes. They encourage him to come back and audition again.

Next up is Elia Esparza. She works at birthday parties for kids to cover her bills while she performs hoping for her big break. Elia sings Coma La Flor and performs in Spanish. She gets a chair turn from Adam and then from Blake and Miley too in her last moments.

Adam thanks her for being different and jokes that he understood every word. He says she has a good voice and it was refreshing. Blake says he uses his Voice button like he does his radio in his truck – he turns it up if he likes it. Miley woos her too.

Miley says it will get her far staying true to her name. Miley says the guys can’t pronounce her name so she should choose Miley. Elia decides to take a chance on Adam as her coach. Elia wanted Adam but says she loves the others. She says he turned first and she likes his taste in artists.

Next up on #TheVoice is Lane Mack who is from Louisiana and is a Cajun family man. Is uncle is a Grammy nominated Cajun music artist. Lane sings Every Day I Have the Blues. He hits a funky high note and Miley turns for him. Miley is happy and says he’s stuck with her.

Miley says he’s on the best team ever. Miley says she thinks they might have a similar taste in music. He’s the first guy on Miley’s team and she says he’s got a very Jeff Buckley sound. Lane is excited and says she’s the coach that he wanted.

Karlee Metzger is up and says life was tough as a kid because they moved all the time and she used to get teased about her weight. She says music was her escape. Karlee sings Samson. She kills it. Miley challenges Blake and they both turn for her at the last second.

Adam says it was vulnerable and powerful. Miley says she loves that song and says she can break her out of her shyness. Miley says they have a connection. Blake tries to play to her and says some of her falsetto got away but her full voice more than made up for it.

Alicia says the song choice was great. Adam tells her it’s time to choose. Blake and Miley both push for her. Karlee goes with Miley who is triumphant and dances over to her. Blake says the only thing Karlee did wrong was to pick Miley as her coach, not him.

Josh Halverson is last of the night and the Texan is a Native American whose mom is Sioux. He works on a cattle ranch but his dad says Josh was always more into the arts. Josh sings Forever Young and plays guitar. Miley and Blake turn and Alicia joins in.

Adam says he’s stupid for not turning for him. Miley says he was so wrapped up in his singing and would love for them to work together. Alicia says his voice is striking and says it would be unexpected for them to rock together and they could be powerful.

Blake asks questions about ranching and says he feels kinship but Josh says he wants to get away from ranching. Adam says he’s going to do something unprecedented and tells Josh that he thinks Blake would be an amazing coach for him. Blake and Adam hug it out.

Josh ponders and says music is about feeling for him so he’d like to be with Alicia. She’s triumphant and fist pumps then dances over to him for a hug. She didn’t expect him to pick her and was very excited. Blake is stunned that Josh didn’t pick him with Adam’s endorsement.