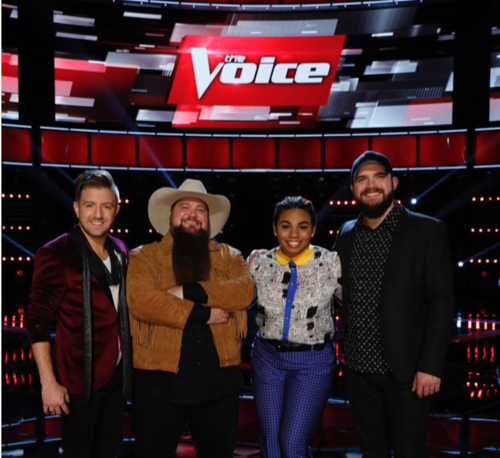 Tonight on NBC’s Emmy Award-winning musical competition The Voice airs with an all new Monday, December 12, 2016, season 11 episode 24 and we have The Voice recap right below.  On tonight’s The Voice episode, the final four artists perform in Part 1 of the two-part Season 11 finale.

Did you watch last night’s episode where on a results episode we found out which artists made it through to the live finale? If you missed the episode and what to find out what happened we have a full and detailed The Voice recap, right here for you!

On tonight’s season 11 episode 21 of The Voice as per the NBC synopsis, “On tonight’s episode Part 1 of the highly anticipated Live Finale Begins.  We will see the final performances from the remaining artists as they bring their A game to win the title of The Voice.”

#VoiceFinale starts now. First up is Team Adam’s Billy Gilman. Carson talks to Billy and Adam. Billy says being in the finals is a lot. We see Billy’s four chair turn and a look back at his big moments including Celine Dion’s I Surrender.

We see Billy and Adam rehearsing Billy’s first son of the night. He’s doing Sinatra’s My Way. Billy takes the stage to sing starting out acapella with just his voice. Everyone is cheering and the coaches are on their feet as he finishes. Amazing. The crowd keeps cheering.

Miley says he just sang her favorite song in the world and says it resonates with her and her team and says thank you and says it’s her anthem. Adam says he thought he was going to lose it at the end and it was beautiful. Adam says the song matched him so beautifully and he should feel like he won.

Josh’s original song is Pick Any Small Town and Adam helped produce it. Now, he takes the stage to sing live. The crowd digs it and the coaches are up cheering as well. Blake says that’s such a cool story that he wrote it with Nolan. He says it’s a cool song he related to and says great job.

Adam says when he saw him perform, he knew that dude could be doing this on the Late Show and he’d think he was a huge country star. He says that song was unbelievable and it came true. Adam says he’s so proud of him and says he’s killing it and he loves the song.

We’ McDonald duets with Alicia

For We’s duet with her coach, they’re doing Ave Maria, the Stevie Wonder version. They take the stage to perform together with both We’ and Alicia playing piano while singing. We’ switches into her opera voice and slays. The crowd goes nuts for them.

Sundance wrote Darlin’ Don’t Go about his wife after a bad argument they had. Blake loves hearing him sing something he wrote. Blake tells Sundance that KISS confirmed they’re going to sing at the finale with him and Sundance cries. His brother took him to that concert just before he died.

The crowd and coaches dig it. Blake says he’s impressed that this show has discovered somebody that he doesn’t get how he wasn’t already discovered. He can’t believe Sundance wrote that song by himself. Blake thanks her for almost leaving him then coming back.

Billy says he couldn’t trust anyone in the business until he met Adam. They chat and Adam says he’s got to work hard since Billy’s such a good singer. They sing Bye Bye Love, the 50s Everly Brothers classic. They rock it out and the crowd totally digs it.

We’ does her original song

Alicia had a songwriter friend that wrote a song called Wishes for We’ to sing at the finale. They talk as they work on the song. Alicia shares insight into her first song. Her big voice rocks the house and the crowd loves it. Alicia says she can’t express how proud she is.

Alicia says We’ is handling this with grace and says this show takes a lot of endurance to stand the test of time and she’s the truth. She says she’s proud of America for seeing what she sees in her. She says there is no ceiling for We’.

Adam says you can hang with Josh and says people love him. They joke around then take the stage together to do Carlos Santana’s Smooth. Both play guitar and sing together and it’s amazing. So funky and fresh. Nicely done. They bring down the house.

The two are dueting on Treat Her Right by Roy Head, Sundance’s dad. Sundance says he’s going to let Blake do all the dancing. They take the stage backed up by funky dancers. They do a huge stage production and the crowd loves it. Sundance’s dad is there and gives them a thumbs up.

Josh talks about wanting to be on Blake’s team and then Adam stealing him. He credits Adam for taking him to the finale. He’s doing Jack & Diane by John Cougar. It’s a great 80s classic. The crowd won’t be quiet until Adam shushes them.

Sundance talks about his wife telling him to try out for The Voice. Sundance jokes that he’d like to be Blake. Blake says he had to get out of Sundance’s way and let him do what he does. He performs the iconic Etta James song At Last.

The crowd loves it and Miley’s jaw is hanging open when he’s done. Miley says they’re freaking out. Blake says he literally couldn’t be more excited or more proud and says it’s like somebody reached back into time and found a classic iconic vocalist. He made Sundance cry!

Billy says Adam is making him hip but in his own way. Adam says this single is a great chance to make an identity as an artist for him. His original song is Because of Me. Adam says it was going to be a Maroon 5 song but he thought it’d be cool for Billy instead.

Adam says this is a first on the show because the song connects in a way that’s gigantic and it’s the right singer and you project a message, that’s the magic and that’s what he loves. Adam says this is one of the most definitive moments of his career.

We’ and Alicia talk to Carson and Alicia says she was trying to figure out who she was in the Blinds. Alicia says We’ always surprises her. We’ does Barbra Streisand’s Don’t Rain on My Parade and Alicia says get ready America. She sings and shuts down the show in a big way.

The crowd is on their feet cheering and Alicia hollers for her. Alicia says she remembers when she said she had been bullied and says that song shows whoever didn’t understand how special and unique she is, that nothing can stop her. Alicia says anyone who has felt that way should recognize.

The artists are done, voting is open all night and closes at noon tomorrow with the results live on tomorrow’s show.