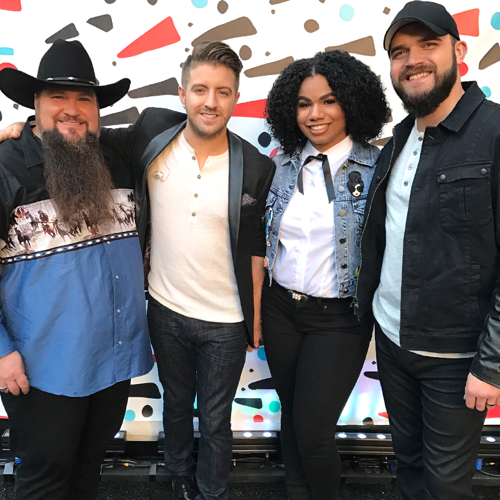 Tonight on NBC’s Emmy Award-winning musical competition The Voice airs with an all new Monday, December 13, 2016, season 11 episode 25 and we have The Voice recap right below.  On tonight’s The Voice episode after weeks of fierce competitions, the winner of season 11 of The Voice will be crowned.

Did you watch last night’s episode where part 1 of the highly anticipated Live Finale began and we saw the final performances from the remaining artists? If you missed the episode and what to find out what happened we have a full and detailed The Voice recap, right here for you!

On tonight’s season 11 episode 21 of The Voice as per the NBC synopsis, “In Part 2 of the live finale on of the remaining artists: Team Adam – Josh Gallacher and Billy Gilman; Team Blake – Sundance Head; Team Alicia – We McDonald will be chosen as the winner of The Voice.”

#TheVoice starts with a silly clip of Adam doing Ferris Bueller trying to skip out of work because he hates Blake. He showers, plays golf, hosts a bus full of tourists and then running in at the last minute. Adam says Gwen’s name and fakes Blake out then runs off.

That’s done and Carson takes the stage and greets the coaches. There are lots of celebrity guests there to sing and the artists in the house tonight have won a total of 78 Grammys. Ariana Grande, Stevie Wonder and the top 12 sing Faith from the new movie Sing.

Josh invited Brendan Fletcher and Austin Allsup for his bring back artists. Josh talks about how much he likes their voice and says Brendan is wacky and Austin can sing anything. They sing Jason Aldean’s My Kind of Party.

Look back at Sundance and Blake

Jordan Smith is there and says he had butterflies when he was in the same position as the Top 4. His holiday album came out and it’s called ‘Tis the Season. Sundance says he was star struck when he met Blake. Sundance says Blake laughs like Count Chocula.

We’ McDonald sings Love Me with John Legend next on the finale special. Carson talks to Miley about her first season. Miley says she got so close to her team and wants to work with them in the future. She says she’ll still coach them. The other coaches joke about how much she talks then Sting performs.

Billy is doing Proud Mary and brought back Ali Caldwell, Courtney Harrell, Sa’Rayah and Christian Cuevas. He says Christian has a vulnerable voice. He says Ali’s voice is a freak of nature and he loves it. He says Courtney’s voice is a force and they bonded.

He says Sa’Rayah’s voice is so sharp and he’s looking forward to singing Proud Mary with four of his best friends. They bring down the house – it’s brilliant.

We see the start of We’ and Alicia’s coaching relationship. Alicia says she wants to eat her. She says she feels like she’s her little sister. We’ says Alicia is phenomenal and off-camera is down to earth. Alicia says it’s the truth when she said We’ came there to meet here.

Alicia and We’ bond

We’ says she’s happy to make it so far with Alicia and says she got a coach and a sister. Next Josh Gallagher since with Cam on Burning House. They do an amazing job. Next we see the coaches and final 4 in the confessional. Billy says it’s amazing to be there.

Sundance she’s hoping for redemption. We’ says people should know they can strive to be better. Blake says it would mean everything to Sundance to win. Josh wants to win it for Adam who says he’s all heart. Alicia says We’ has an old soul. Billy says this win is for the underdogs.

The Weeknd is there and sings Starboy and the crowd loves it. Daft Punk also got a shout out. Then we see Blake and Garth Brooks tells him he’s still wearing the same damned thing. Blake comes out in a flowered jacket like Miley had. He says Miley keeps copying his style and he has to be himself. Cute.

We’ has chosen Love Locked Down by Kanye and is bringing back Brendan Fletcher, Aaron Gibson and Darby Walker. She says Aaron has an amazing smooth voice and she says she loved Darby’s Ruby Tuesday and it makes her want to melt and says they became good friends.

She says Brendan has an amazing emotional voice and is like a big brother to her. She says expect the unexpected with the four of them. They take the stage and sing together. It’s funky and fresh and so amazing.

Next we see a little fake sitcom called The Voice with Blake and Alicia as the parents and Adam and Gwen as the kids. There’s even a little pig and then Carson comes in and gets hit in the face with a pillow. It’s a promo for February showing who the four judges will be on the next season in February.

Carson talks about their original singles and says they all ended up in the Top 10 on iTunes. Carson then presents them each with a home recording studio. Now we see Josh saying he didn’t expect to work Adam but it’s been the best thing.

Adam says they work outside the box and it’s been great. Josh says Adam is goofy and just like him. He says Adam believes in him so much and that has helped him get better and better. Adam says he’s a good dude and easy to be with.

Next we see Billy sing with Kelly Clarkson on It’s Quiet Uptown. Their voices blend nicely since they’re both powerhouse singers. It’s incredible.

Sundance has brought back Austin Allsup and Courtney Harrell to sing Ain’t Worth the Whiskey with him. He says he and Austin hit it off and says their kids hang out. He says he loves the conviction in Austin’s voice. He says Courtney’s voice is so smooth.

He says she took Blake’s advice and left it all on the stage. He says she’s sweet and is a great mother and he admires that. He says they had fun on Team Blake so he wanted to bring back his team to rock it out one more time. They do rock it out. It’s killer.

It starts out with just the guys doing a verse and the chorus and then Courtney makes her big entrance singing from up above them and she does the country justice. It’s a great trio. She comes down the big stairs to rock it out with them. Wow.

Adam does an old guy voice and says he’s doing Blake because he liked Billy better singing country. Billy says he’s so happy he is on Adam’s team. They joke about having high voices and people think they’re girls on the phone when they were teens.

Adam says Billy can sing any note. Billy says they have a brotherly bond. He says they laugh and he loves that. Adam says Billy has unwavering commitment to music and it warms his heart and he wins it. They joke around and it’s adorable.

Next is Bruno Mars singing 24K Magic. He does an over the top production, not surprisingly, and the crowd is all into it. He starts out on the judge’s chairs and gets the audience all hyped up. They’re screaming by the time he and the Hooligans are done.

We see Alicia giving private master classes to the other coaches. She says the coaches have been asking her to teach them piano. We see her with Miley who jokes around and is awful. She says not all have what it takes. She says Blake shows some promise.

He says he wants to play on the finale and she says he’s not bad for a country boy. We see her whacking him with a stick and he says it’s going too fast. She says he’ll be ready. Then we see Blake take the stage and sits at the piano. Alicia gives him a nod.

He’s in a long denim jacket like it’s fancy. He cracks his neck and acts like he’s really playing this. Alicia is stunned as he jams. The audience is on their feet for him. Alicia says she’ll never teach anyone again when someone else asks her to teach.

The final four take the stage. Sundance thanks Blake for being a great guy and so sweet and says he’s so genuine. We’ says Alicia has been so important in her life and says it’s about being confident and being herself and after this, she won already.

Billy tells Adam that he never thought he’d be there and it’s been amazing and a real struggle all these years and says Adam gave him his voice back. Josh tells Adam that he didn’t turn for him at the Blinds but has helped him grow and step outside his box in so many way.

Fourth place is Josh Gallagher. Third place is We’ McDonald. Second place is Billy Gilman and Sundance Head has won The Voice!

Blake runs to hug him and Adam goes to hug Billy. Sundance is crying as his family joins him on stage. That’s win number five for Blake. Carson hangs him the mic and Sundance sings Darlin’ Don’t Go. He hugs his mom as he sings and his kids hold his Voice win trophy.