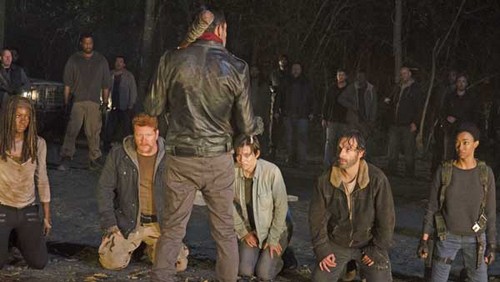 “The Walking Dead” Season 7 premiere spoilers have centered on who got killed by Negan on The Walking Dead Season 6 finale episode. The National Enquirer reveals the victim was was Lucilled via information from a set insider on TWD. The tabloid confirmed that Abraham (Michael Cudlitz) dies and was killed by Negan (Jeffrey Dean Morgan).

The set insider told the tabloid, “Abraham is the biggest guy in the group. Negan taking him out sends a huge message to Rick and everyone else.” We agree that Abraham makes the most sense as who Negan would choose for the beat down because he was the only adult that remained defiant.

If you remember the death line-up of 11 characters, all were in a full-fledged state of panic, sadness or defeat. Poor Rick Grimes (Andrew Lincoln) looked shell-shocked and couldn’t even muster the energy to stand up for his son Carl Grimes (Chandler Riggs).

Among The Walking Dead gang, only Carl and Abraham stared Negan in the face with something other than defeat and fear. You’ll recall that Negan tried to get a response from Carl and got none. That teenager is battle hardened from hitting puberty in the apocalypse.

That’s why Negan called him a “future serial killer” with some grudging admiration. But Abraham is more of a problem than Carl. As the biggest and strongest of the group – and clearly with no fear of Negan – Abraham is the one who could come after the leader of The Saviors.

Most TWD fans should know by now that Glenn Rhee (Steven Yeun) died in the comics, but showrunner Scott Gimple promised the show would take a “hard left” from the books. Killing Abraham would indeed be a change of course.

If you read TWD comics or heard spoilers from the graphic novels, you’ll know that Abraham should already be dead thanks to a crossbow through the eye from Dwight (Austin Amelio) but Dr Denise Cloyd (Merritt Wever) got that horrid death in his place.

Abraham is on borrowed time so killing him makes sense. There’s also the fact that he just declared himself ready to settle down and breed some ginger babies with Sasha Williams (Sonequa Martin-Green). It would be a terrible time to lose Abraham and TWD showrunners love to break out hearts.

And with Maggie Green (Lauren Cohan) in pregnancy distress, perhaps Glenn and Maggie will lose their baby instead of Maggie losing Glenn. And since Glenn already “died” once in Season 6, maybe showrunners thought they didn’t need to kill him again.

Plus, Abraham had just said a heartfelt farewell to Eugene Porter (Josh McDermitt) where Abraham acknowledged that Eugene no longer needed him. Protecting Eugene has been Abraham’s calling since we met them so there’s closure there.

Some have scoffed at this report because they don’t consider the National Enquirer a “legitimate” news outlet but they have broken countless stories that turned out so be spot on – like John Edwards’ cheating and love child, Gary Hart’s affairs, and Jessie Jackson’s illegitimate offspring.