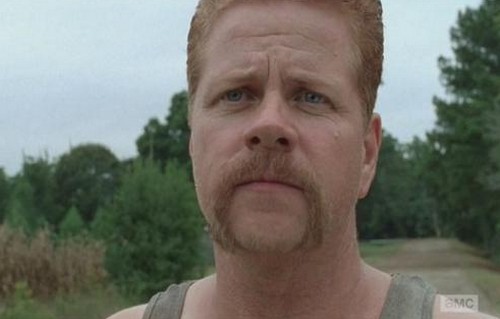 “The Walking Dead” season 7 spoilers are based on the TWD season 6 finale which had fans of the AMC show angry about the final episode even before it aired. Leaked spoilers indicated we would be left with an unrevealed death by Negan (Jeffrey Dean Morgan) and not know who died – and the show delivered.

But was it Abraham (Michael Cudlitz) that was bludgeoned to death?

We think the tough ginger bought the barbed-wire bat death and here’s why.

First, Abraham has always had a purpose outside of himself. When we first met Abraham, he thought he was escorting Eugene (Josh McDermitt) to reveal his cure to the authorities. Turns out Abe was scammed by Eugene. Then he found another purpose to keep him going.

Abraham was busy with Rick’s (Andrew Lincoln) gang and was getting busy with Rosita (Christian Serratos). But with the group safe behind the walls of Alexandria, Abraham had a chance to discover himself. He’s finally fulfilled, so that could be his doom.

Second, Abraham just committed to Sasha (Sonequa Martin-Green) and said he was ready to make babies. Whenever a character gets everything they want, it’s time for them to go. No one in the apocalypse gets a happy ending. No one.

Third, Abraham was already dead by now in the graphic novels. Abraham should have died from the crossbow bolt through the eye that ended up taking out Dr Denise (Merritt Wever). He’s been on borrowed time since that episode.

Fourth, Glenn (Steven Yeun) is off the table. Glenn fell to Negan’s bat in the comics, but TWD showrunners assured us they were taking a “hard left” from the books. They did use the same dialog in the brutal beating, but would have selected an alternate victim.

Fifth, Abraham’s work with Eugene is done. One of Abraham’s functions in life was keeping Eugene alive so his big brain could help the group – as he’ll be doing shortly with the bullet-making plan. But now that Eugene can fend for himself, Abraham is superfluous.

Sixth, Michael Cudlitz sent a tweet that many fans of The Walking Dead believe indicates he’s done with the show. He tweeted to Josh McDermitt “I had a blast working with you. (I did)…” The word “had” is past tense. Plus the tweet was later deleted which is sketchy.

Finally, after the The Walking Dead Season 6 finale, both Scott Gimple and Robert Kirkman appeared on after-show “Talking Dead” and made a couple of things clear. They told us yes, someone did die (for those that thought it was just a flesh wound).

Gimple and Kirkman also said that it won’t be revealed on screen until The Walking Dead Season 7 kicks off. But the showrunners also they said there were enough hints dropped in the finale to tell you clearly who it is. Most of the hints dealt with Abraham’s fate and plans.

The bottom line is, Negan taking out Abraham shows he can kill their strongest person without blinking an eye. Plus, Abraham stared Negan in the face to let him know he wasn’t scared of him – that’s not a guy you let live because he’ll come after you. Abraham was the smart kill for Negan.

What do you think? Share your comments below and check back with CDL for all your TWD news and “Fear the Walking Dead” recaps starting next Sunday April 10.