The Walking Dead Spoilers: Who Negan Kills and Why – Last 10 Minutes of Season 6 Finale Revealed 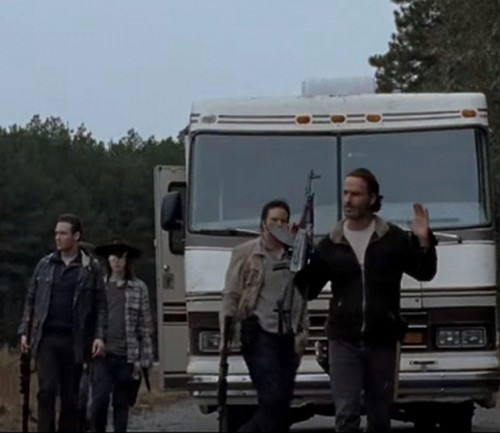 “The Walking Dead” Season 6 final episode spoilers reveal that although the season 6 finale will be supersized at 90 minutes, we won’t see big bad Negan (Jeffrey Dean Morgan) until the last 10 minutes of the episode. The gang will be tormented by the Saviors throughout the show but Negan won’t be there until the bitter end.

TWD spoilers reveal that Negan shows up at the end of the episode and starts with a speech about Rick Grimes (Andrew Lincoln) wiping out too many Saviors. He explains that Alexandria will get the same deal the other communities get – 50% of their output goes to the Saviors and no one else dies.

But Negan’s policy when setting up new business is that he always kills one of the people from that community to make sure they know he’s serious. Spoilers also reveal that Negan will line up the whole group – looks like there’s about 10 of them – on their knees while he chooses a victim.

Carl Grimes (Chandler Riggs) looks to NOT be in the lineup because he’s a kid. However, Negan will threaten to pluck out Carl’s eye and force Rick to eat it if anyone tries to stop him from killing the person of his choosing. That’s pretty awful. Might as well be dead as blind in the apocalypse!

When Maggie Greene’s (Lauren Cohan) pregnancy pains cause her to scream, Negan will offer to put her out of her misery, but it’s doubtful Negan would kill a woman if he won’t kill a kid – particularly not a pregnant woman – even one who may be miscarrying or giving birth to a monster.

What’s interesting in all of this – and that we heard a couple of episodes ago – is that Negan’s Saviors truly believe that Rick and his Alexandrians are the bad guys. Yes, the Saviors are taking from the communities, but they offer protection. They see the Alexandrians as total black hats.

Rick and his bunch admittedly have taken life after life. The Savior body count is pretty high. They killed six or seven on the road with a rocket launcher – Carol Peletier (Melissa McBride) took out a whole truckload of them herself plus the ones she and Maggie knifed and burned alive.

Plus, several more died at the railroad tracks before Dwight (Austin Amelio) called them off and they ran. They have to be at least 30 down from Rick and company. That’s about as many people as live in the whole of Alexandria. To the Saviors, Rick’s group looks like homicidal maniacs.

The bottom line is, Negan lines up the gang, has them on their knees and chooses one seemingly at random for slaughter. We’ll see the bat come down from the perspective of his chosen victim and Negan will strike several times before that person dies and the scene cuts to black.

But we will NOT KNOW who died until the beginning of season 7. Looks like “The Walking Dead” showrunners are going to leave us hanging to see who dies for many long months. In an interview with Brandon Davis on ComicBook.com Josh McDermitt (aka Eugene) commented on the finale recently saying “You’re screwed. There is no preparing for it.”

So fans of TWD, now you know to brace yourself for 80 minutes of build-up then 10 minutes of Negan’s pre-murder monologue then a brutal bat beating. Plus, TWD showrunners have indicated nothing will be said by or about the victim to give us any clue as to who dies.

What do you think TWD fans? Do you hope an Alexandrian dies rather than one of Rick’s rangers? Who do you hope survives? Will you riot if Daryl dies? Share your comments below and come back to CDL on Sunday April 3 for the live season 6 finale episode recap of “The Walking Dead.”