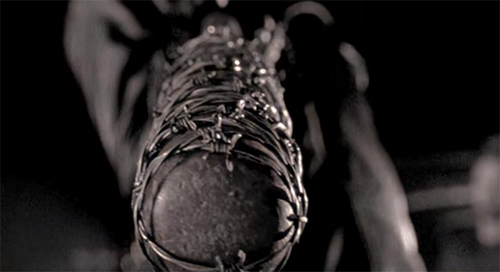 “The Walking Dead” spoilers for the Season 6 finale indicate that 10 of our core group – Rick’s rangers plus the Alexandrians – will be in the batting lineup and could face Negan’s barbed wire-wrapped wrath. Here’s a list of who will end up in Negan’s hands and candidates for a bloody season ending death!

#1 Glenn Rhee (Steven Yeun): Glenn was taken hostage by Dwight (Austin Amelio) along with three others. Glenn is a critical part of the lineup because he died at the end of Negan’s (Jeffrey Dean Morgan) bat in the books. This time, Glenn will speak up to try and save Maggie and could die protecting her.

#2 Michonne (Danai Gurira): Michonne was taken with Glenn thanks to Daryl running off. Michonne’s hair will be attached to a walker and sent as a sign to Rick. If Negan realizes that Michonne is Rick’s honey, he could very well target her for the brutal bat beat down.

#3 Rosita Esposito (Christian Serratos): Poor Rosita is having a bad week. First, Abraham dumps her so he can get with Sasha (Sonequa Martin-Green); then, she’s taken hostage. Will Abraham step up to save Rosita if she’s singled out by Negan? What could work in her favor is that Negan likes the ladies and she’s hot…

#4 Daryl Dixon (Norman Reedus): Even though fans have threatened to riot if Daryl dies, he’s in big trouble. Dwight shot him, looks like non-fatally, but Negan cold target Daryl if he figures out he’s the one who wiped out a whole gang of Saviors with the rocket launcher. Plus Daryl isn’t from the books, so he’s constantly expendable.

#5 Abraham Ford (Michael Cudlitz): Abraham will be part of Rick’s gang that takes off in the RV to get Maggie to the doctor at Hilltop because of her pregnancy distress. He’ll work closely with Rick as they try to evade the Saviors. Since Dr. Denise’s (Merritt Wever) crossbow eyeball death was Abraham’s in the books, is he on borrowed time?

#6 Carl Grimes (Chandler Riggs): Carl already lost an eye, could he now lose his life? Some spoilers indicate that Negan has a soft spot for kids and won’t want to kill Carl. But as Rick’s son, Carl could be singled out for some torment. Negan might not kill Carl, but that doesn’t mean he won’t hurt him…

#7 Aaron (Ross Marquand): Aaron is along for the RV ride as well – and as an Alexandrian, rather than one of Rick’s core group, he seems like a good choice for the bat beating. That would give the satisfaction of a character death without taking out one of Rick’s. Just as Denise stood in for Abraham, could Aaron stand in for Glenn?

#8 Maggie Greene (Lauren Cohan): Maggie’s pregnancy is in trouble and she’s in agony. But rather than Rick and the gang getting her to the Hilltop doctor, they will all end up in Negan’s hands, which means she’s getting worse. Spoilers reveal that Negan will offer to put her out of her misery. Would Negan really kill a pregnant woman?

#9 Eugene Porter (Josh McDermitt): Eugene is feeling more competent in the new world and also decides to ride along to Hilltop as we’ll see at the start of the season 6 finale. If Eugene is targeted by Negan, it would be bad for the group since he’s got the know-how to make bullets and help the group survive. Let’s hope Negan doesn’t kill the mullet!

#10 Rick Grimes (Andrew Lincoln): It seems like Negan would be smart to cut the head off the snake at Alexandria – and that’s Rick. But that also risks destroying the community. The whole point of the Savior’s everyday business is to feed off other communities like parasites, so Negan wants Alexandria to survive and may spare Rick.

What do you think, TWD fans? Who will meet their end at the end of Negan’s bat Lucille? We know that one (or more) characters will die at Negan’s hands in the season finale. Who do you think will to the leader of the Saviors?

Share your comments below and who you think will die at Negan’s hands. And be sure to come back to CDL on Sunday, April 3 for a live recap of the Season 6 finale of “The Walking Dead.”