The Walking Dead Season 6 Finale Spoilers: Does Carol Live or Die, Fate Revealed – Can Morgan Save Her? 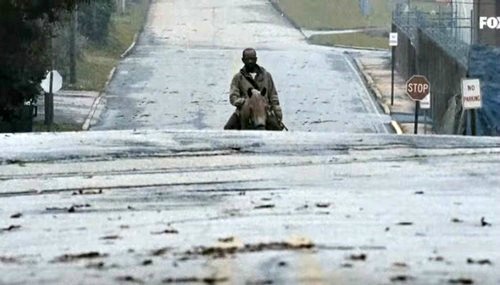 “The Walking Dead” Season 6 finale is coming up on Sunday April 3 and it looks to be a brutal end to the already shocking season. We know that Negan (Jeffrey Dean Morgan) and his terrifying bat Lucille will finally show up, but what about Carol Peletier (Melissa McBride)?

Too bad they took her tears as weakness and didn’t hightail it back to The Sanctuary. Carol took most of them out with her clever sleeve gun but didn’t bother to check for survivors once she picked off Jiro who was hiding behind the truck tire.

Last we saw Carol, she had trudged off into the field leaving behind her rosary. So what happens next for the intrepid former abused housewife? We know the lone surviving Savior scooped up her rosary and went after her – as did two of her Alexandria core group.

**SPOILER ALERT – DON’T READ ANY FURTHER IF YOU DO NOT WANT FINALE SPOILERS!!

“The Walking Dead” spoilers hint that the Savior survivor will catch up to her and shoot Carol down. But she won’t be dead yet. Carol sees her chance to get out of this world and be reunited with her daughter and surrenders to the blissful blackness of death and tells him to go ahead and finish it.

But that’s when her unlikely hero Morgan Jones (Lennie James) rides to her rescue. He quite literally rides to the rescue like a knight on a white horse – or grayish brown in this case. Looks like Morgan will find the stray horse the guy at the barn was fussing about.

Of course, Morgan doesn’t want to kill anyone but it looks like he’ll ultimately break his Eastman code and take out the Savior to save Carol. But then more men on horseback will show up – just who are these guys?

TWD spoilers tease these may be Ezekiel’s men from The Kingdom. Carol has a couple of gunshot wounds and it looks like Carol and Morgan will take off with the Kingdom crew and that will be the end of them for Season 6.

Depending on how “The Walking Dead” showrunners play this, we may be left with the impression that Carol and Morgan are being taken prisoner rather than being rescued. Whatever happens to them – whether Carol succumbs to her wounds or not – won’t be revealed until Season 7!

What do you think fans of TWD? Will Ezekiel’s men give Morgan a pass since he saved the guy at the barn from a bullet in the back compliments of Rick Grimes (Andrew Lincoln)? Will Carol and Morgan take up residence at the Kingdom and leave Alexandria for good?

Stay tuned to CDL all week for more “The Walking Dead” spoilers leading up to the big 90 minute finale on Sunday April 3 and stick with us for the live recap of the finale and after show “Talking Dead” as well.