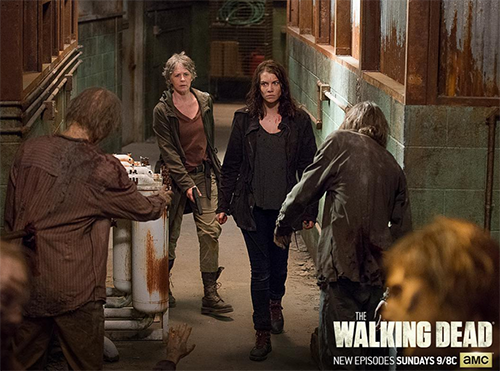 “The Walking Dead” spoilers include some leaked footage from the Season 6 finale episode. We’ve seen the footage and although it’s impossible to tell who the victim is, we can see Negan (Jeffrey Dean Morgan) crushing someone’s head with his lethal bat, Lucille.

Negan has the bat in a two-handed grip, rears back with his hands over his head, and delivers a crushing downward blow. Seems like that has to be a kill shot – or at least delivers an injury that no one in the apocalypse can recover from…

But who is it that is on the receiving end of Lucille’s barbed-wire wrapped glory? In the graphic novels, it’s Glenn Rhee (Steven Yeun) that buys it from Negan, but Scott Gimple has been changing things up drastically from the comics to the TV translation.

On Sunday’s show, the crossbow bolt through the eye that was meant for Abraham Ford (Michael Cudlitz) was instead dealt to poor Dr. Denise (Merritt Wever). Some TWD fans are upset that epic character deaths from the books are being foisted off onto ancillary characters.

But for most, it was a relief to see that it was Denise and not ginger Abraham that got their ticket punched on the most recent episode. But this definitely has us wondering if Glenn’s presumed death in the Season 6 finale could be dealt to someone else instead.

In fact, the worst TWD spoiler we’ve heard (and possibly the most devastating if it goes down this way) is that Negan will have three of our beloved core group members on their knees while Negan walks behind them and decides which to kill.

The spoiler says Negan’s bat will go crashing down as the episode ends and we will not find out who was beaten to death until the premiere of Episode 7. The Walking Dead has played us hard like this before with season finales, so this is entirely plausible.

So far, the only guest we know for sure to appear on after-show “The Talking Dead” airing just after the 90 minute Season 6 finale is Norman Reedus. This teases he could still be alive at season’s end since they usually don’t announce Talking Dead guests who are offed.

However, Norman could be one of the three possible victims of Negan and all three could be on the couch in the finale discussion on Talking Dead. So if we hear that Steven Yeun is also on the couch, that could be a huge hint that The Walking Dead is going to burn us with a massive finale cliffhanger.

What do you think fans of “The Walking Dead”? Will you be outraged if TWD showrunners leave us with a many months of wondering who met their end with Negan’s death blow from Lucille? Or do you think we’ll see the character death and will have the hiatus to mourn?

Share your comments below and come back to CDL often for more “The Walking Dead” spoilers.