The Walking Dead Season 6 Finale Spoilers: Michonne and Daryl Appear as Walker to Rick – Dead or Captured by Saviours? 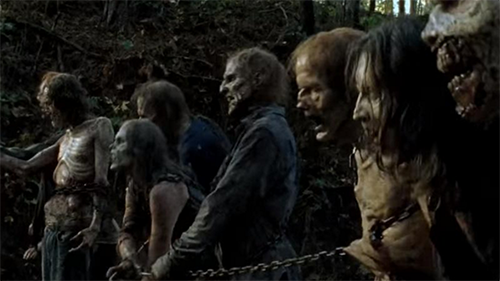 “The Walking Dead” spoilers reveal that Michonne (Danai Gurira) and Daryl Dixon (Norman Reedus) are in the hands of the Saviors. We also know they have Glenn Rhee (Steven Yeun) and Rosita Espinosa (Christian Serratos). But the way it’s revealed to Rick Grimes (Andrew Lincoln) is shocking.

The Alexandrians are off to Hilltop in the RV when they run across some Saviors. That leads to a tense showdown that results in Rick and the gang backing off and heading down another road to try and get to the Hilltop – one of the group needs medical attention (more on that later!).

They come across a huge gang of walkers chained together that are blocking the road. That’s pretty easily dealt with, but the devil is in the details. How long will it take the Scooby gang to notice that the walkers are dressed to send a message?

TWD spoilers reveal that one of the walkers is wearing Daryl’s iconic winged vest and another has some braided locks of Michonne’s hair on them. Those walkers weren’t just put there to try and harm Rick’s group but to send a distinct message that Negan has two of their people.

We have to wonder at what point Rick will realize that when Primo said “I’m Negan” he did not mean it literally. It seemed like Rick thought he took out the big bad and now thinks they’re just cleaning up leftover Saviors and are on the road to success.

But Primo’s statement mirrored that of Molly’s: “We’re all Negan.” It’s very “I am Spartacus.” (If you haven’t seen Spartacus and don’t get the reference, shame on you – go watch it). To summarize, the “I am Spartacus” tactic involved a group of people claiming that they were each the “true” Spartacus in an effort to protect their leader, the real Spartacus.

Carol tried to stop Rick at the time, but he put a bullet in Primo and mentally checked killing Negan off his list. We have to also wonder why Carol didn’t put a post-script in her “Dear Tobin” letter: P.S. Tell Rick he did NOT kill Negan. That would have been helpful.

Once Rick and the gang go Fashion Police on the chain of walkers, they will get the hint that his new gal pal, Michonne, and everyone’s favorite biker, Daryl, are in dire danger. That changes how they proceed from there on out knowing there’s much more at stake.

What do you think, TWD fans? Will Rick put everyone at risk in an effort to save Michonne? What will the group do with the knowledge that the Saviors have turned the tables on them?

Share your comments on the Season 6 “The Walking Dead” finale and check back with CDL often for more The Walking Dead spoilers and a live recap of the 90 minute finale on Sunday April 3. 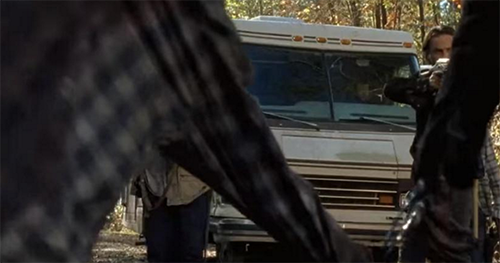